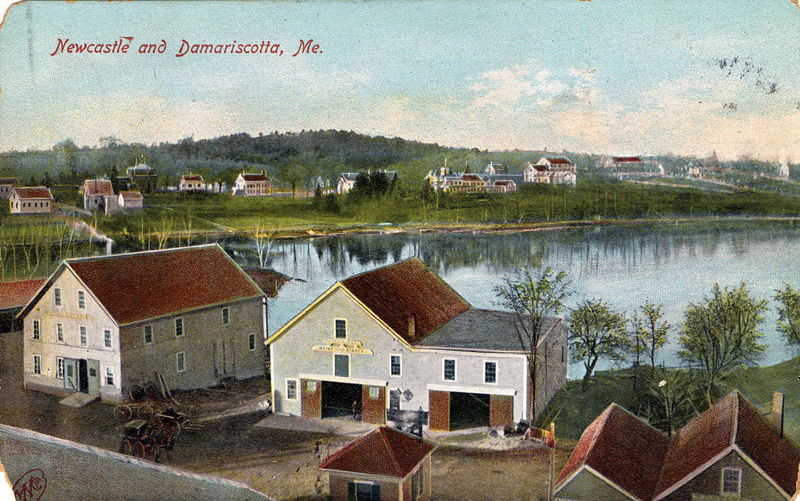 1908 postcard of the building of D.H. Northey, where he manufactured carriages and sleighs as far back as 1887 in Damariscotta. His building is on the far left in this photo. (Postcard from Marjorie and Calvin Dodge collection)

This past week while Marjorie and I were looking over one of our Damariscotta postcard collections, we came across a postcard which shows some old buildings on lower Elm Street right in the village area. The postcard was dated April 8, 1908 and was sent at 4 p.m. It is a real nice postcard showing both the Damariscotta and Newcastle sides of the Twin Villages and the Damariscotta River in color.

The first building on the left side of the card shows the business of D.H. Northey. This is where he manufactured his famous carriages and sleighs as far back as 1887 here in Damariscotta. The photo shows wagons and parts of wagons beside the building. Mr. D.H. Northey was noted for his high-quality wagons and sleighs. 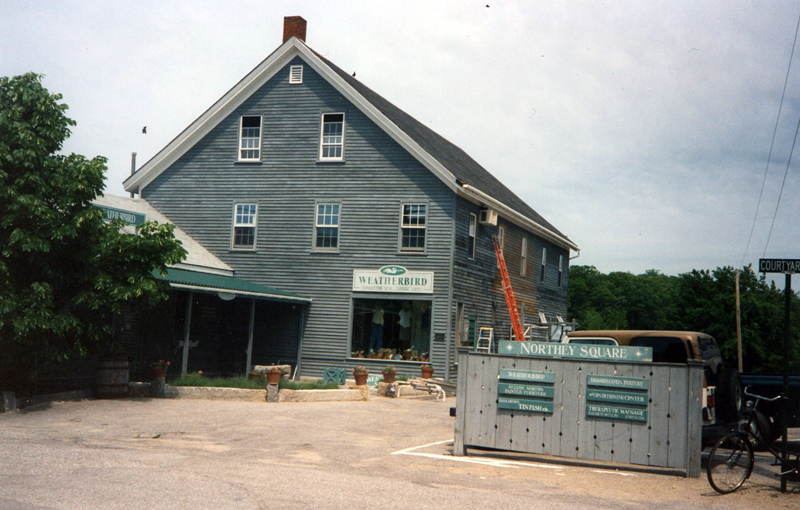 Weatherbird, and Northey Square after it was remodeled. (Photo courtesy Marjorie and Calvin Dodge)

My father-in-law bought a couple of these sleighs when he was in the antique business and sold them to people in the ski areas of the Northwest. We still have some photos of the sleighs. My wife is sitting in one of the open sleighs.

In later years, this building was bought and used as a warehouse for the Nash Telephone Co. for many years. Then it was sold and remodeled and made into a clothing store, as well as a lunch place and named Weatherbird. This has been a real successful business over the years, and the building has been kept in real good condition over the years and is still being enjoyed today by the people of the area. 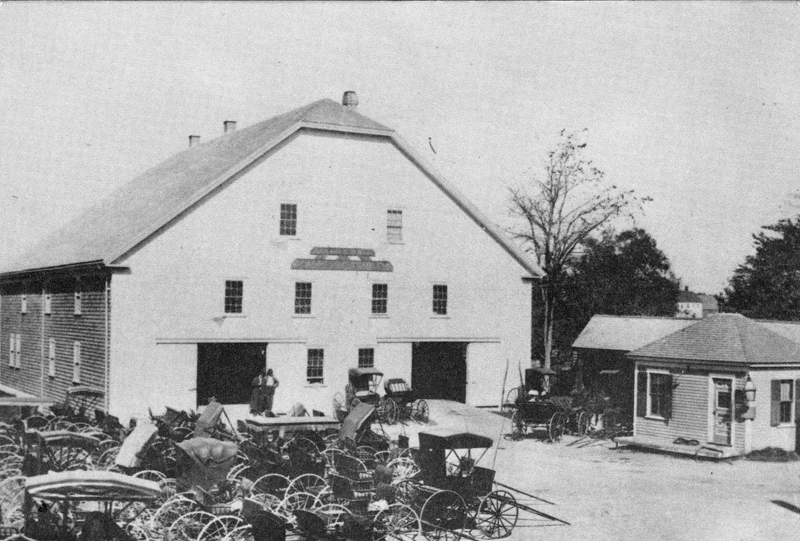 The second building was the business of Royal Hall and the sign over the front door read “Royal Hall, Maine Hotel Stable.” This building had its roof raised and this changed the looks of the building. This was a real successful stable and rented all kinds of horses and carriages and other types of work wagons in this area. When the horse and buggy went out, it changed again and became the business of Motors of Maine Inc. Portland and they sold Chandler cars and became a service garage and also sold Cleveland cars. A.P. Bennett was proprietor.

The photo shows they also stored cars on the second floor of this building in the wintertime as well as the muddy season. They also sold Socony Motor Gasoline. Note the old-style gas pump in the photo, and they also sold United States Tires. 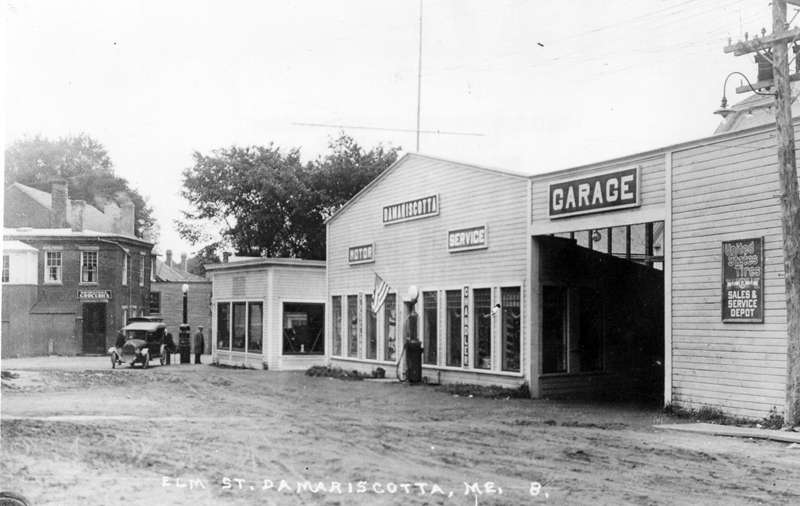 Motors Service Station, where H.M. Castner was proprietor and was agent for Chandler & Cleveland Cars in the 1920s. Note the tall gas pump in front of Halls Garage. These buildings sat in front of the Motors of Maine Inc. garage on Elm Street in the 1920s. (Photo courtesy Marjorie and Calvin Dodge)

We now refer back to the picture of the Royal Maine Hotel Stable and one can see a small building with an oil outside lamp on the corner of the building by the door. This small building was bought by Mr. House and moved to the parking lot behind Dr. Neil Parson’s home and made into a small filling station. I can remember it as a small boy. 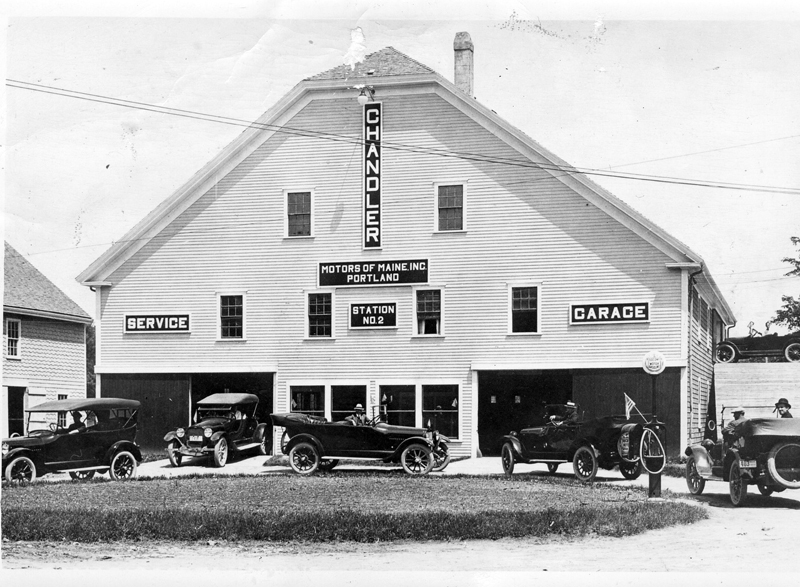 Mr. House’s son, Arthur House, built onto the building and ran the gas station and store for a number of years. It was very interesting to trace and see this little building being moved around the Damariscotta area.

There have been many changes on this section of land and all the buildings have been taken down except the D.H. Northey Building, which is now the home of Weatherbird and Northey Square in the postcard photo. The rest of the area is known as Elm Street Plaza today. In this article, we try to show the number of buildings and businesses that once operated on this section of land now known as Elm Street Plaza. 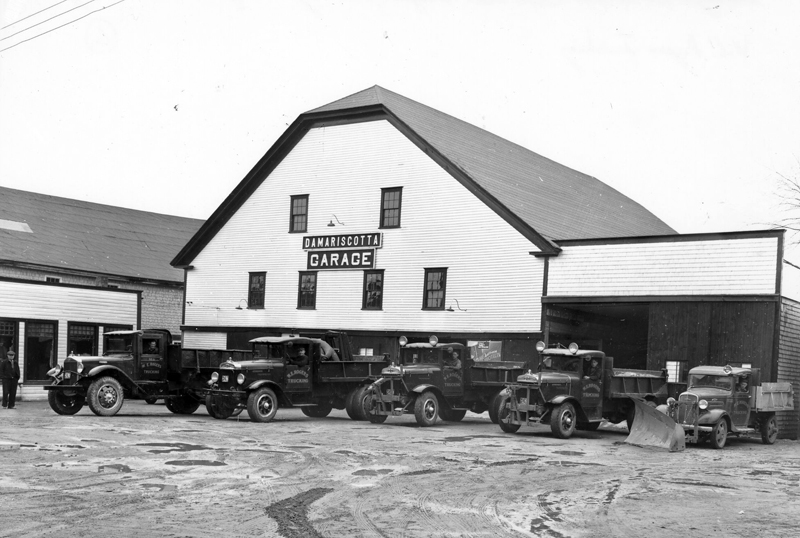 This garage was located where Elm Street Plaza is today. (Photo courtesy Marjorie and Calvin Dodge)

We find it so true that history and time, as well as economics, play a big part in changes which take place in so many small Maine towns like Damariscotta. Damariscotta and its businesses have always adapted to the changing times by taking down old buildings and building new ones to have new businesses. We can be very proud of the businesses here in our town. We have a good business district with no rundown buildings and vacant empty stores. We can be proud that businesses still want to come to our area, or our banks want to help our businesses remodel and keep the town looking neat and looking prosperous and in a thriving condition.