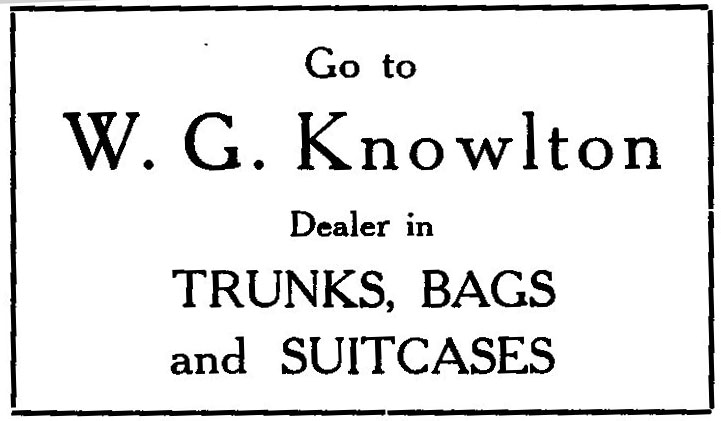 An ad in the 1922 Lincoln Academy Lincolnian. (Courtesy Marjorie and Calvin Dodge)

We start off this article by asking a simple question: What do trunks, bags, suitcases, saddles, bridles, collars, whips, and blankets have in common with Main Street, Damariscotta?

Well, all these items were sold and repaired right here on Main Street in Damariscotta in the store of W.G. Knowlton.

First, we start with trunks. These were storage boxes for clothes and small items. They were made of wood, sometimes covered with leather. They were bonded with metal bands to strengthen the trunk. These trunks came with a flat, top-hinged cover or a curved hinge cover. They both had locks to keep the items inside secure while in storage or in shipment. Some had one or two removable trays, which held small items like jewelry, or small articles called trinkets. These trunks were usually lined with a real nice cloth fabric.

I recall seeing many of these storage trunks arriving at the Maine Central Railroad station here in Newcastle during the summer months. We found an ad in the Lincolnian of June 1922 by W.G. Knowlton, dealer in trunks, bags, and suitcases. 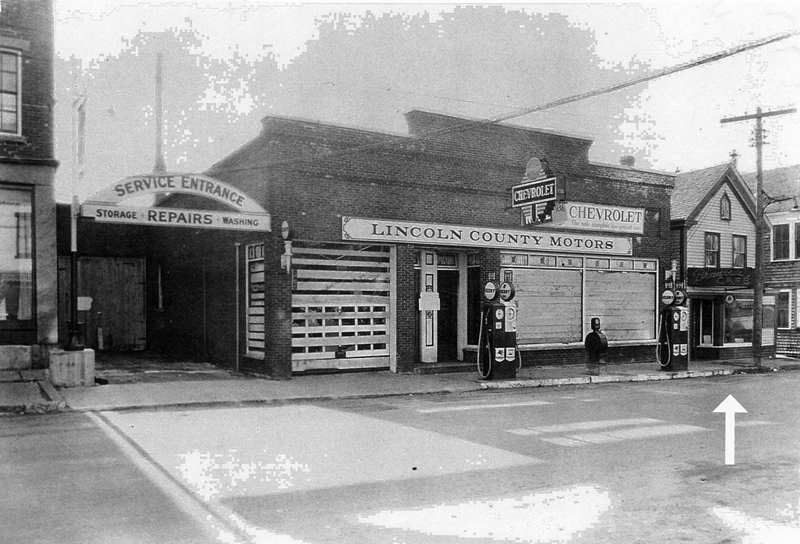 In this photo, the Frank Carney building had been torn down and now was the location of Lincoln County Motors. It burned in 1932. The small building to the west looking to the bridge, which was Wilbur Knowltons harness shop, was made over and is Bradfords Cafe; if one looks carefully, the sign over the door says “Bradfords Cafe.” Paul Bradford was W.G. Knowltons son-in-law. The arrow points to Paul Bradfords cafe. (Photo courtesy Marjorie and Calvin Dodge)

Small carrying bags were also in demand for a short overnight or weekend stay at that time period. Most every family had a suitcase of some size in their family home. This was a way of life by most people. Most every doctor had a leather carrying bag, which he used when he was making local house calls to see an ill person. Even the local veterinarian carried his leather bag when he made his calls at the local farms to treat a sick animal. Such was the way of life.

We found an ad in the 1927 Lincolnian by W.G. Knowlton. It read, “Hand Made Harness of All Kinds, and dealer in saddles, bridles, collars, whips, blankets, etc. Repairing promptly attended to. Damariscotta, Maine.”

Mr. W.G. Knowlton was a well-skilled man in making and repairing leather goods.

Even in 1927 there was a good number of men working with their teams of horses in the woods and on the local farms. These teams of horses needed constant work and repairs of their leather harnesses. Even the local ice man and the blacksmith wore leather aprons. I can still picture our ice man, Charles Lessner, wearing his leather apron with a bib front. Mr. Fred G. Copp, who operated the shoe repair shop on the third floor of the Austin Block, also wore a bib-front leather apron to keep the leather dust and glue off his clothes when grinding the leather sole or leather heel of shoes he was repairing. 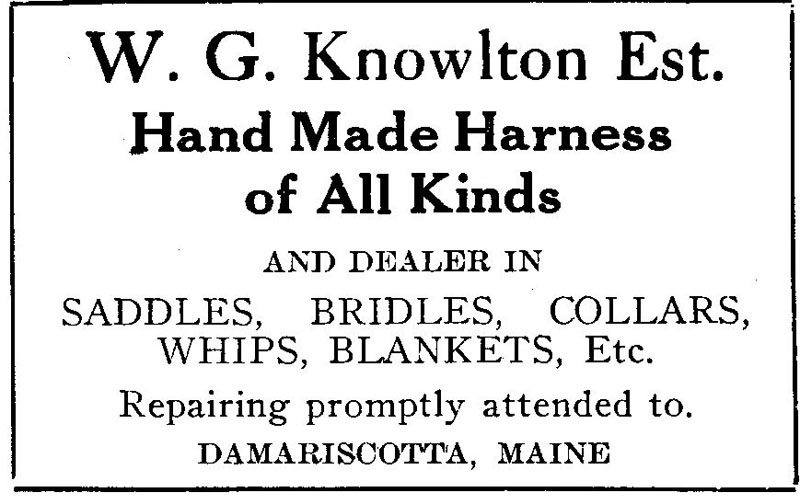 An ad in the 1927 Lincoln Academy Lincolnian. (Courtesy Marjorie and Calvin Dodge)

My wife reminded me that when her parents bought Knowlton farm, which had been in the Knowlton family for over 150 years, there was a saddle marked “W. Knowlton” on it. Her father boarded a horse from a girls summer camp through the fall and winter months, and she used the Knowlton saddle when she or her father used to ride the horse for fun and to keep the horse exercised.

There were also some real nice horse blankets left in a six-board wooden chest and they had Knowlton tags on them and large horse-blanket safety pins on them. Marjorie’s mother kept some of these large safety pins. There were also some large and very heavy carriage robes or blankets, which could also have come from the W.G. Knowlton shop on Main Street, Damariscotta. Her mother also kept a nice buggy whip and holder, which was left on the farm.

Some of the Knowlton family members also owned the land and house where the Damariscotta Bank & Trust is now on upper Main Street.

So one can see that there were a number of different Knowltons in the Damariscotta area. 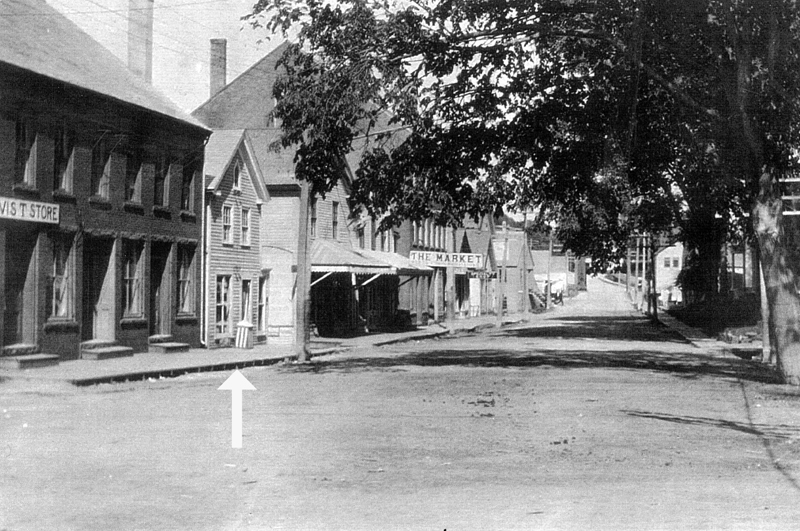 The brick building on the right was built by Mr. Frank Carney. In this photo, it was the location of the Davis Art Photographer Shop in 1897. The small two-story building to the right was owned by Mr. Flint and he had his barbershop there. Then this building became the location of Wilbur George Knowltons Leather and Harness Shop (the arrow points to the W.G. Knowlton harness shop) for a number of years. After Mr. Knowltons death, his son-in-law made it into a restaurant. His son-in-law was Paul Bradford. (Photo courtesy Marjorie and Calvin Dodge) 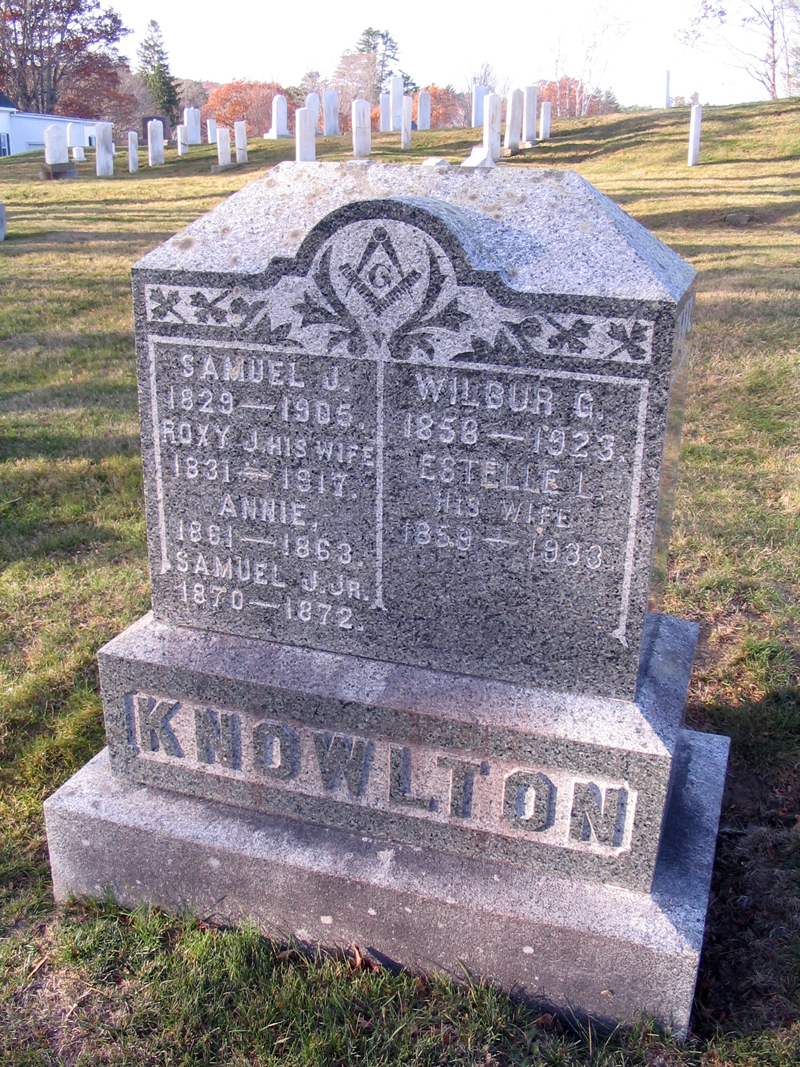 The gravestone of Samuel J. and Wilbur G. Knowlton.

Mr. Wilbur G. Knowlton was listed as a harness maker and had a shop in Damariscotta. His son, Raymond, must have followed in the same trade, and both worked in the same shop. So we both assume this because after Wilbur’s death, his business was still advertised under “W.G. Knowlton Est. Hand made harness of all kinds” in 1927; that was four years after his death. We found some of this information in “Old Bristol and Nobleboro, Maine Vital Record,” by Christine Huston Dodge.

Mr. Wilbur George Knowlton is buried in the Hill Side Cemetery in the Norris Yard, lot D-21. The stone has a Masonic emblem on it.

We will now try to explain to everyone where Mr. Wilbur G. Knowlton’s harness business was located on Main Street. We found a nice old photo showing the building with other buildings on both sides. This wooden building sat where the driveway goes between the Colby & Gale service station and the ice cream store.

This building was owned by Mr. Frank Flint, who had a barbershop there for years. Later it was used by Wilbur G. Knowlton for a number of years as his harness shop on Main Street, and his son-in-law, Mr. Paul Bradford, then fitted out a restaurant there. Later it was occupied by the Coverdale Grocery Store chain, with Mr. Clifford Cate as manager. Mr. Clifford Cate continued managing this store until it became the First National Store and also worked for the First National until he retired.