This past week we had beautiful cool evenings, which was perfect sleeping weather for the second week of July. It also made ideal working weather to work in our flower and vegetable garden. Everything is in full bloom and growing very well.

This week, from out of nowhere, some of our friends gave us a lot of old papers, town reports, early magazines, and Maine farmers’ almanacs. Many of these items dated back a few hundred years.

My wife often says when you least expect it, real old history items and books show up.

This week, the weather and a wonderful breeze in the evening blew a gentle breeze across the length of our porch. This gave the both of us a chance to look through and review many of these items.

One item which really caught my eye was a 1966 Maine farmers’ almanac with a full page ad on the back cover of Clark’s Spa, Damariscotta. It listed a long list of items they sold in their store. It brought back so many fond memories of when I was a small child and even as I grew older and went to high school, and even after we married. 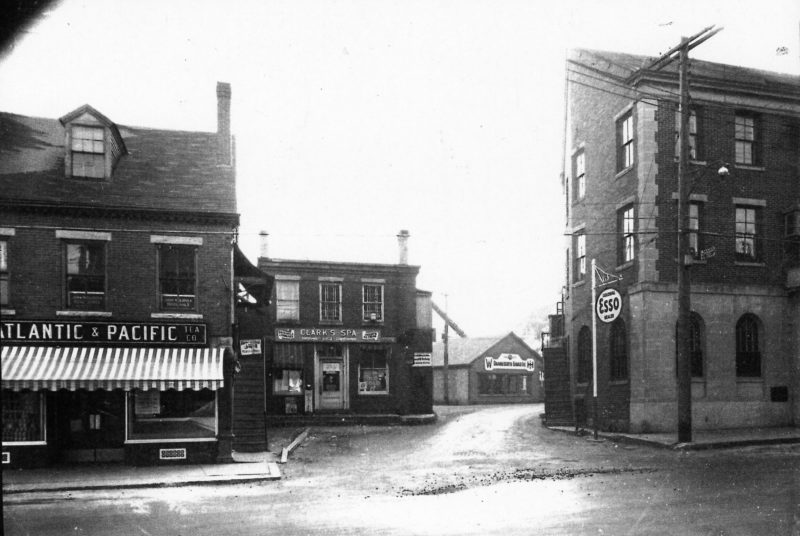 The old David W. Chapman block, built in 1868. It was known as Clarks Spa when Calvin Dodge was in school. It is now King Eiders Pub. (Photo courtesy Marjorie and Calvin Dodge)

My mother used to buy a lot of her stationery and envelopes there. It was at Clark’s Spa that I first started to buy my first children’s books and comic books, like Blondie and Dagwood, Bugs Bunny, Captain Midnight, Dick Tracy, Donald Duck, Gene Autry, Little Orphan Annie, and Flash Gordon.

My mother also bought me some of the so-called Big Little Books; they were 4-by-4-inch thick books that were generally illustrated with comic strips. I used to swap these books with other cousins. After we bought some of these comic books, my mother and I would sit up to the bar and enjoy a small glass of lemon-lime or root beer soda for five cents a glass. Sometimes we would sit in a booth in the back of the store.

I still remember that in front of the door to Clark’s Spa they had a tall scale that you could stand on and find your weight for just one penny. So many of us children loved to use this scale over many years.

My mother used to buy a cookbook at Clark’s Spa and trade some of the recipes with her friends and they would likewise do the same.

At the early age of about 10, my Aunt Blanche got me interested in collecting U.S. postage stamps, and my mother bought me my first stamp album from Clark’s Spa. As I recall, just as you went into Clark’s Spa, they had a display case with a glass front, which displayed all the heated kinds of salted nuts, and the smell of the fresh salted nuts came at you as you opened the front door.

Then about the age of 12, I became interested in collecting coins. Here at Clark’s Spa I started to buy my coin books. They had coin books for pennies, nickels, dimes, quarters, half-dollars, and even for the old silver dollars. Back in the 1940s, 1950s, and even in 1960, you could go into any bank and trade paper money for silver dollars.

Mary and William Clark were a real kindhearted couple and they drew a large number of high school children into their store, and the boys and girls would gather in the book section where the booths were and enjoy all kinds of ice cream sodas, sundaes, and milkshakes after school hours or before the movies or after noon shows on weekends. 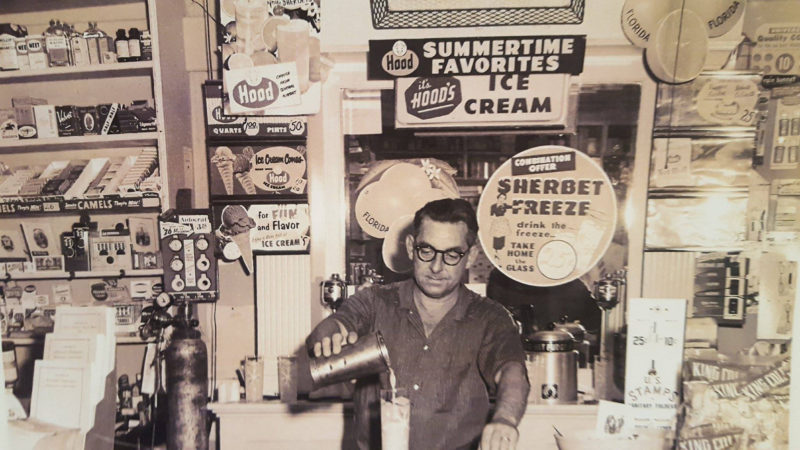 William Clark pours a drink behind the counter at Clark’s Spa.

I could even buy all my special containers, which held coins and had a screw-on cover to hold them. It was so nice to have a local store where one could buy a large lot of different collecting supplies.

They also had a jukebox player where one could get three records played for a quarter. They always had a good selection of the top records. I can truly say that all us high school children enjoyed it so much.

I recall you could go into Clark’s Spa and have them make you a lime Coke or a cherry Coke at no extra cost, just five cents for a small or a dime for a large soda. 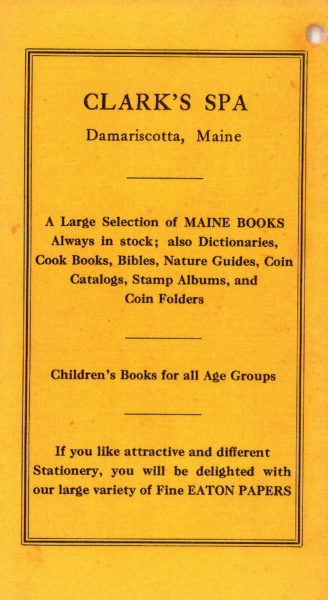 A 1961 ad for Clarks Spa. “It was a real nice store where all ages could sit in a booth and have a cold drink or any type of ice cream product and read a newspaper or buy any type of book,” according to Calvin Dodge. (Photo courtesy Marjorie and Calvin Dodge)

My wife, Marjorie, just spoke up and said with a big smile that her mother, Kathleen, and her often went into Clark’s Spa. Kathleen also collected coins and bought her coin folders and books there, and Marjorie also bought her comic books there. Also, Marjorie’s brother Lew bought his so-called Little Big Books there also from around the age of 12 up through the early 1940s. He also bought his comic books there. When at Lincoln Academy he used to take his girlfriends to Clark’s Spa for a soda, ice cream, or a sundae and always sat in the back section in the old style booths, with other classmates after school hours and on summer evenings before going to the movies.

Over the years, Kathleen, as well as Marjorie and I, bought many Maine books written by Maine authors at Clark’s Spa. Marjorie reminded me that Mrs. Clark would always order a special Maine book if you wanted a certain one. This was before we had regular bookstores in town.

I also recall that on the second floor over Clark’s Spa, Ed Tuckey had his hair styling salon. I used to walk down to the village with my mother and she would go to Ed’s salon to have her hair done and she would give me a quarter and I would go into Clark’s Spa and buy a comic book and ice cream and sit in the back booth. Then she would come down and pick me up and we would walk home.