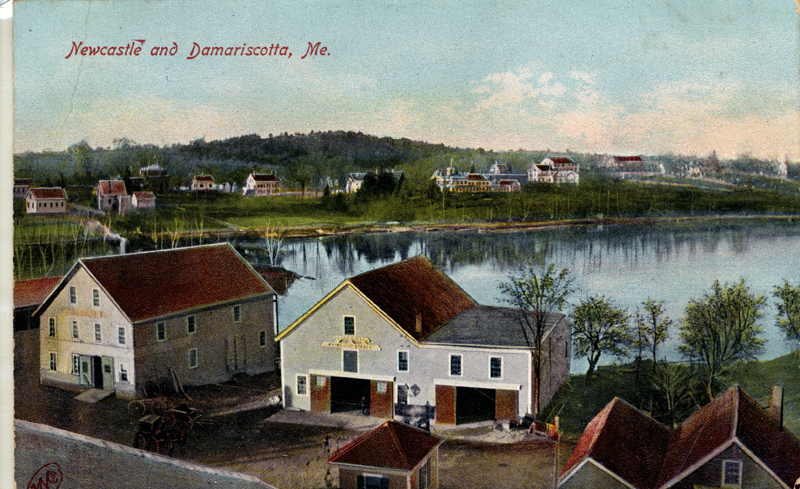 This view, circa 1908, shows buildings set in the location that is now Elm Street Plaza, Damariscotta. (Postcard from Calvin Dodge collection)

When one starts researching the history of the town of Damariscotta, it can become a little complicated. The problem is Damariscotta did not become a town until 1848. In the years before that, the area that now makes up Damariscotta was part of Nobleboro and Bristol.

Therefore, when doing research of Damariscotta, one has to look back into Nobleboro and Bristol and the area of land which eventually became the town of Damariscotta.

Some of the old maps, like the Lincoln County map of 1857, clearly outlines the boundaries and town lines of Damariscotta, and even gives the names of people who own the land.

The Ephraim Rollins map of 1813 is a great map of the Nobleboro area. The lots are drawn out in length and in width and the number of acres and who owned them was recorded when Damariscotta was still part of the town of Nobleboro. The 1813 map does not show the area of land that was part of Bristol and is now part of Damariscotta.

I have a copy of the 1813 map on which the late Nobleboro historian George Dow drew the southern boundary of Nobleboro as it was in 1847. This section is now part of the town of Damariscotta. It also shows the size of each lot and the person who owned the land in 1813 and the ponds and lakes.

In the book “History of Bristol, Bremen, and Pemaquid,” by John Johnston, there is a map showing the town line of Bristol as it was in 1794 and shows the Damariscotta town line, adopted in 1848.

The Bristol map also shows some of the family names residing there in 1751. Johnston’s book contains a lot of written history of the area and the names and photos of important men.

Then another important source are the records of David Dennis, Justice of the Peace of Nobleborough, Lincoln County, from June 28, 1796 to June 1, 1820; a period of almost a quarter of a century. The book in which Squire Dennis recorded the marriages he performed also contains many records of cases tried before him. I have a copy of this in my collection.

Now for the benefit of all, the Damariscotta Historical Society has taken on a very large project to restore all 31 cemeteries located in the town of Damariscotta to good condition.

The society put Patti Whitten in charge of the project. With the help of other members and people she has recorded the names of all the people who are buried in all 31 cemeteries. This is a huge, time consuming job, requiring thousands of hours of work by her entire team.

She also worked with other members to repair broken stones and she has had many of the marble stones cleaned, so that most all the writing on each stone can be clearly read. She has put flag holders on all the veterans’ graves in all our cemeteries. She has also completed a list of all veterans’ names and the war they served in. This will truly be a great source of information and history for the Damariscotta Historical Society.

For those people who want to find more history on shipyards and shipbuilding in the Damariscotta area, the Penobscot Marine Museum in Searsport has a copy of Robert B. Applebee’s book. It lists vessels built in Nobleboro, Newcastle, Damariscotta, and Bristol, and it has a list of ships that were recorded by Lowell Sidelinger, who was the customs house agent here in Damariscotta. Skidompha Public Library has a copy of this book.

Over the years Maine Maritime Museum has provided me with a lot of history of Damariscotta-built ships. The people at the museum are always willing to help you.

I also find the book called “Greyhounds of the Sea,” which is a history of the American clipper ship written by Carl C. Cutler, provides a lot of information on Twin Villages clipper ships and even shows some photos of different clipper ships in color, taken from oil paintings around the world.

The book “The Sailing Ships of New England 1607 to 1907,” written by John Robinson and George Francis Dow, is also a great help for information about early shipbuilding in New England.

Another great book I like is called “No Pluckier Set of Men Anywhere,” written by the late Waldoboro historian and my longtime friend, Mark Biscoe. This book gives a great amount of history of the Twin Villages shipbuilding and lists the names of many shipbuilders and details about locally-built ships, including their size and tonnage, where they were built, who owned them, and how long they lasted on the open seas.

I also find that I often go to the Old Bristol and Nobleboro Vital Records, Volume 1 and 2. Volume 1 records births and deaths and what cemeteries people are buried in. These records were carefully put into two books by Christine Huston Dodge and published under the authority of the Maine Historical Society in 1951. These two books can be a great help for anyone looking for their ancestors, their occupation, and where they are buried here in our area.

It also lists selectmen and assessors of Damariscotta and professional men like lawyers and physicians from 1848 to 1906. It states the population in 1906 as 741.

Another great book is the so-called Maine Register, which lists every town in Lincoln County, including Damariscotta and all its businesses and town officers. This is just a little information on how one can start researching the history of Damariscotta.

Please enjoy your home. Always check in on your neighbors, and be kind to everyone.