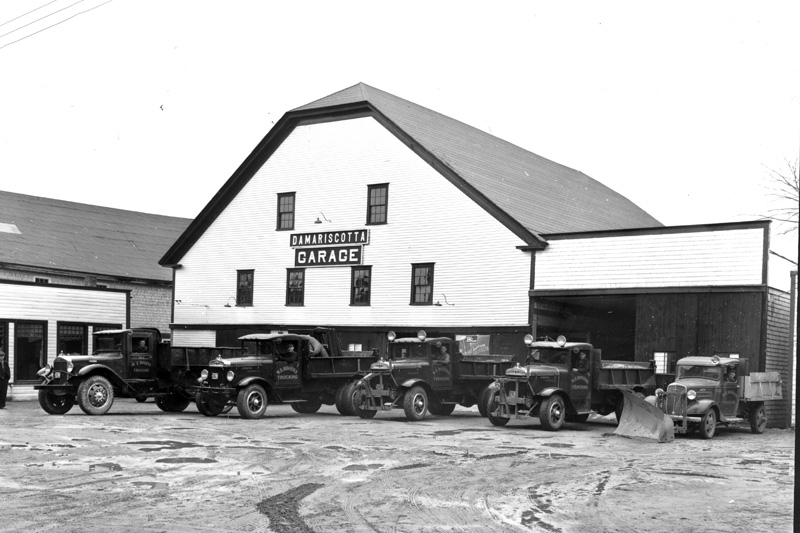 From Chandler Motors of Maine Inc. to Damariscotta Garage, they did a lot of automobile and truck repair work on all brands of vehicle and usually had three mechanics on duty at all times. (Photo courtesy Calvin Dodge)

Royal Robertson Hall came from Massachusetts to Damariscotta as a young man to operate and run Royal Hall’s livery stable and carriage rentals, which was a huge, two and a half story wooden building located where the Elm Street Plaza is now.

At age 27, Mr. Royal Hall met a fine lady, Zetta Plummer, who was 36 years old, and they married and one year later had a son. Philip Royal Hall was born Jan. 3, 1903, here in Damariscotta.

Philip R. Hall went to local schools in the area, which included the old two-story brick schoolhouse which was located on Church Street. This brick school had a lower classroom on the ground floor called Longfellow School for grades 1-4. On the second floor grades 5-8 attended the Kipling Grammar School. 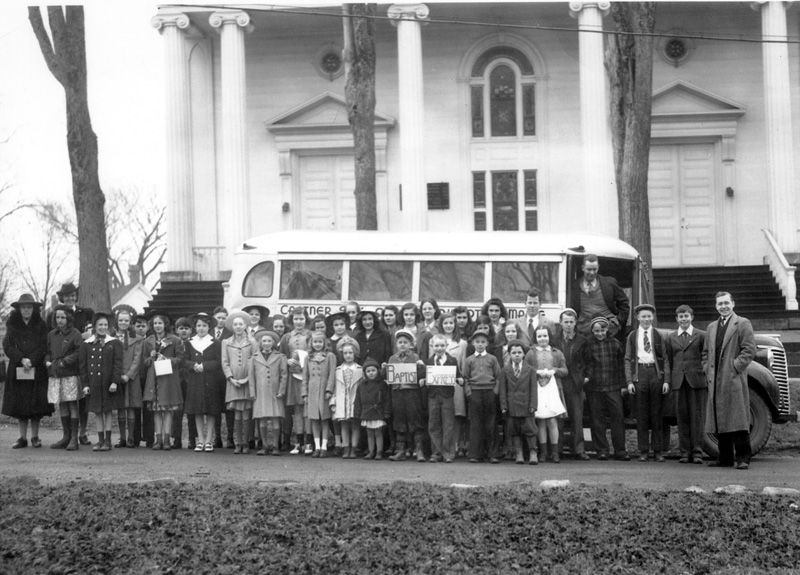 We find that when 8-year-old Philip Hall went to primary school in 1911, he had Gertrude L. Dunbar. When he entered grammar school on the second floor, he had Julia E. Barker as his grammar school teacher grades five through eight.

At the same time Royal Hall had a very active horse and carriage rental business which was tied to the Maine Hotel, which was located on the second and third floors of the Day Block on Main Street. The Maine Hotel was operated by two men, a Mr. Sanborn and a Mr. Jacobs, and it was well known for its fine dining hall and fine food.

Many of the people who stayed at the Maine Hotel would rent a horse and carriage from Royal Hall and take day trips around the local area and around many of its beautiful fresh water lakes. These lakes provide good swimming areas as well as providing very good fishing spots.

When my wife Marjorie and I built our new home here in Damariscotta back in 1961, our next door neighbor was Mr. and Mrs. Richard and Madeline Hopkins. She was a school teacher in Damariscotta for 43 years. Her husband Richard never drove a car.

Then as I recall, we invited them over for a Sunday dinner. 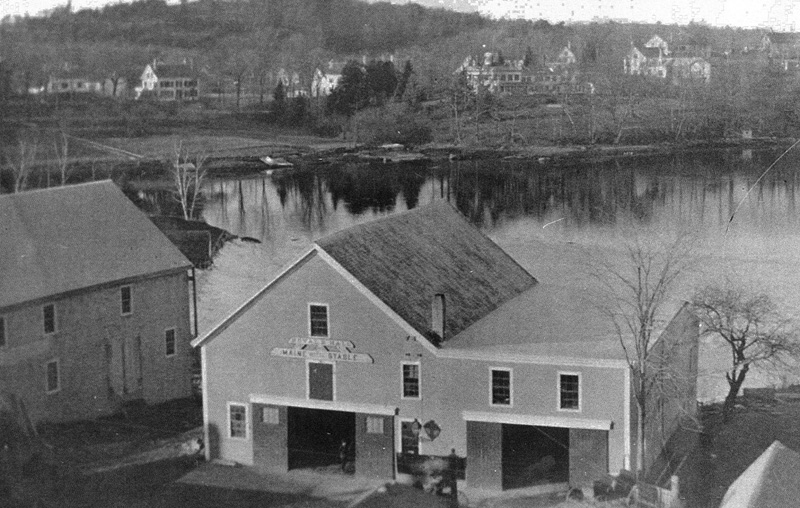 The old section of the Maine Hotel Stable before it was added onto to make a much larger building to store wagons and cars on the second floor. The building was located where the Elm Street Plaza is today. (Photo courtesy Calvin Dodge)

I always liked to know the history of the area and the local people. So I asked her one question, “When did you learn to drive?”

I recall she looked over at me with a smile and said, “I just started to teach school and I needed to buy a car and get my driver’s license to get around the area. There was a nice looking young man who lived near my home. So I asked him if he would teach me how to drive. His name was Philip R. Hall, and I said I would pay him for his time and he agreed.”

Back in those days cars were all hand shifted by the use of a hand shifting gear and a clutch.

“Well,” she replied, “Within three weeks I could hand shift and double clutch with ease.”

Madeline went on to say, “I have to tell you this funny story. After two weeks my mother spoke to me one day. She spoke softly and said, ‘People are beginning to talk around town seeing you riding with Mr. Hall alone together.’

I replied, ‘Oh, mother, Mr. Hall is such a fine man and I am almost ready to go and get my driver’s license.’

Well I did pass my driver’s license and the rest is history.”

Madeline Sidelinger did teach here on Round Top and the school was known as the Hawthorne School in 1917 and 1918. Then Madeline moved down to the Longfellow School on Church Street. 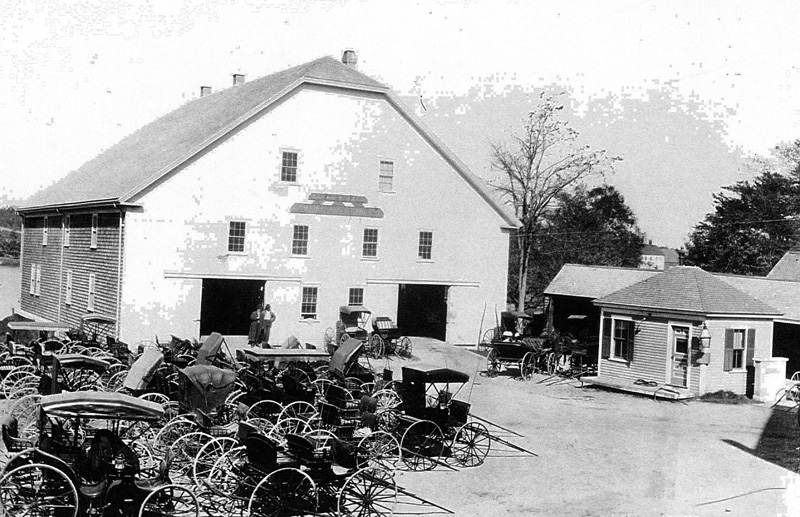 Royal Robertson Hall came from Massachusetts to run and operate the Royal Maine Hotel Stable which supplied carriages and horses for the guests of the Maine Hotel located in the Day Block. (Photo courtesy Calvin Dodge)

Now we turn back to young Philip Hall and Eva Gamage’s marriage on Nov. 18, 1922. We find a few years went by, then their first daughter was born Feb. 16, 1930. Their two daughter’s names were Phyllis and Marjorie Hall.

He also used to take groups of high school children to Lincoln Academy for a number of years.

He also used to take older people who could no longer drive from their homes to the local grocery stores, doctor’s offices, or even up to the Damariscotta-Newcastle railroad station to take the train or bring them back from the railroad station.

I have a real clear photo of Philip Hall standing in the doorway of the Damariscotta school bus in front of the Damariscotta Baptist Church around 1940. Harry Mann, owner of Mann’s Shipyard, used to pay Philip Hall $10 on a Sunday to drive the bus out the Biscay Road and down the Lessner Road to pick up the young children for the Baptist Church Sunday School and take them back after the service each Sunday. The photo also shows the Rev. Henderson at the far right hand of the group and his wife Barbara Henderson at the far left of the photo.

In later years Marjorie and I used to write and correspond with Rev. Henderson and his wife. 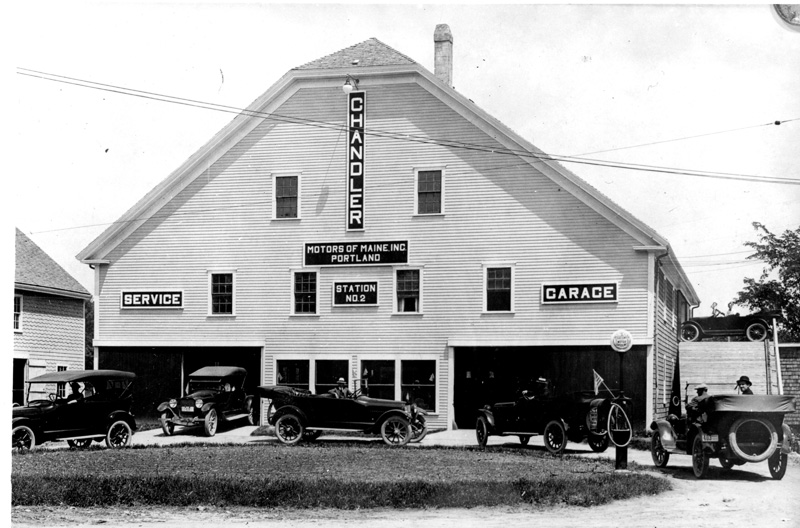 When cars replaced the horse and wagon, Chandler Motors of Maine, Inc took over the location of Royal Robertson Halls house and wagon stables. They stored cars on the second floor in the winter time when roads were not plowed. (Photo courtesy Calvin Dodge)

The Rev. Henderson said how he enjoyed Philip R. Hall and how much Mr. Hall enjoyed all the school children he used to pick up on his Sunday school route. Such were those days when everything seemed to run so smoothly.

Then Philip Hall married for the second time, to a woman named Elizabeth McDougal Hall. They moved to Bath in 1954 and he operated a taxi there also. Then he went to work at the Bath Iron Works in the paint department and worked there until he retired.

I also worked at BIW for 32 years and I used to talk to Philip R. Hall and ask him what Damariscotta looked like when he was a young person growing up in the area. We had many hours of great conversation. After retiring, Philip Hall worked summers at Oak Grove Cemetery in Bath.

Philip R. Hall was 77 years old when he died at Bath Memorial Hospital. He is buried in the Hillside Cemetery in Damariscotta with his parents and family.

This has been a short history of the Hall family, Royal Robertson Hall and Zetta Black Hall and their son Philip Royal Hall when they all lived in Damariscotta. Philip Hall so often told me that all 13 brick buildings that were built in 1846 are still standing and have continued to be occupied year after year and are all well maintained and kept in fine shape with up-to-date products and goods of the time.

Please stay safe and keep an eye open for the older people around you and the neighborhood.