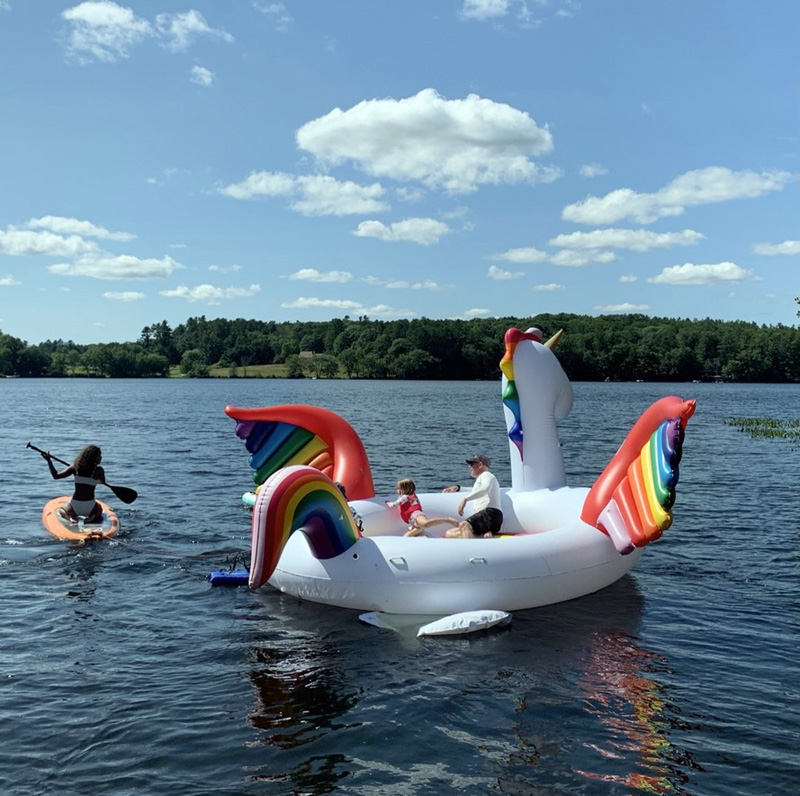 Well, long time no see. I’ve been off on summer vacation enjoying our extended family and grand kiddos. My wife Paula and I are fortunate to have a place on Damariscotta Lake, and we made the most of it this past month. One of our super fun activities was to launch a giant inflatable, floating platform in the shape of a Unicorn. Our friends and family were instrumental in getting this enormous water toy blown up and launched. Scott brought his air compressor and did the lion’s share of the work. Others wore out their calves and thighs pumping air with a foot pedal. Together we managed to blow it up and launch it. This beast is so large it’s probably visible from outer space! A fair number of adults and kids can all climb aboard and share it at the same time. Check it out: a picture really is worth a thousand words.

As we were enjoying the Unicorn and other family activities on and near the water, our summer fun was rudely interrupted. As we spent more time on the dock we noticed a large, rather creepy critter had taken up residence on the wooden dock. It was now apparent that we were sharing the dock with Maine’s largest and most impressive spider. It’s commonly called the Dock or Fishing spider.

Coming across one of these spiders unexpectedly is guaranteed to send shivers down your spine. Dock spiders grow to 3 or more inches across and would cover a good portion of the palm of your hand. And, in my humble opinion, they are one of the most amazing creatures that inhabit the edges of our lakes and ponds. Dock spiders have a number of super powers that they routinely employ to live and thrive in their environment. Now many, many people are creeped-out by spiders, but let’s put that aside for a moment and focus on some of their incredible talents and abilities.

First of all, unlike most spiders, dock spiders don’t spin webs to catch their prey. These giant spiders use the surface of the water as their “web.” The flat water surface carries vibrations that guide them to their prey. As they rest on the side of a dock or floating log, they stretch their forelegs out to touch the surface of the water. (It helps to have eight legs/arms to perform this trick.) If a leaf lands on the water surface, they don’t react. These spiders can tell the difference between a leaf landing on the water and an insect. When an insect lands on the water, the spider senses the unique vibration, and deploys its first “super power” – walking on water. 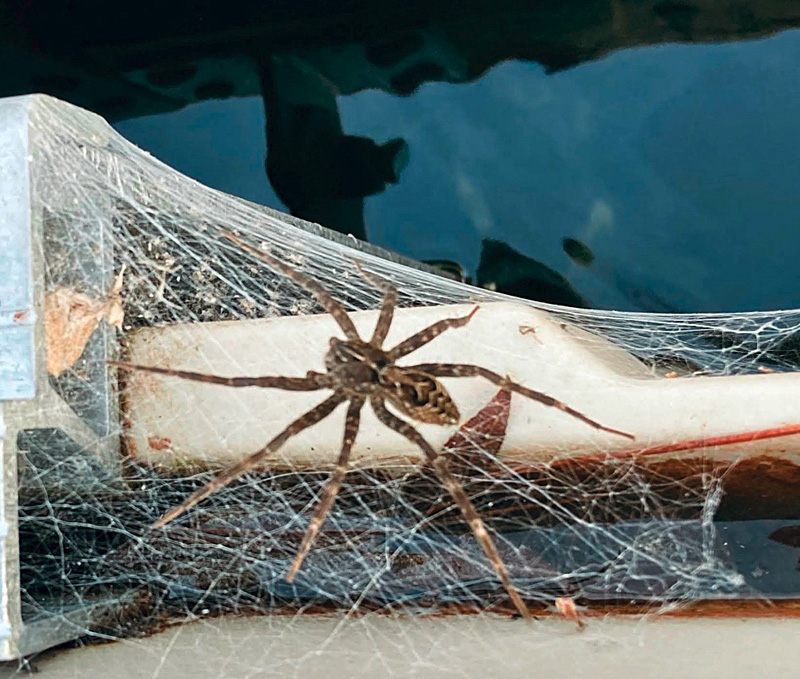 With a bead on the prey, the dock spider races across the surface of the water in the direction of the insect. How do they manage this trick? Well, their legs are widely spaced and are covered in a waxy substance that repels water and this gives them the ability to stay on top of the water. While they are racing along they use their eight eyes, arranged in two rows, to hone in on the hapless insect. When they reach their victim, the dock spider bites the prey with a pair of large fangs and injects a venom that paralyzes the insect. If you were bitten with these fangs, it would feel like you were stung by a bee. Ouch!

These spiders have even more tricks up their eight sleeves! Dock spiders are also called Fishing spiders. They earned this monicker by actually hunting small minnows and baby alewives under water. It doesn’t seem at all spider-like but by employing their next super power, they dive under water and breathe while swimming for up to 30 minutes. How, you ask, is this possible? Well, these amazing creatures trap air bubbles in the hairs on their legs. These air bubbles make it possible for them to breath under water like scuba divers. An unwary fish is no match for a spider that uses air bubbles to breathe as it dives down grabs the fish and paralyzes it with its fangs.

Dock spiders do spin webs. But it’s the female spider that spins the web to protect her nest. These large nests commonly hold up to 1,000 baby spiders! And the female dock spider does all this work herself. Her male partner, after the fertilization process is complete, becomes attached to the much larger female. This results in the female devouring him in roughly 20 minutes or less. Her male partner is an unwilling donor to the food supply for his 1,000 offspring!

All of this nature in the raw is occurring as our family is happily enjoying swimming and sun bathing on our large wooden dock. Everyone is having a rollicking good time, until our daughter-in-law Heather spots a very large female dock spider resting between two sections of dock. She is temporarily “paralyzed” by the sight of this spider and refuses to step over it. All the coaxing in the world has no effect. She can’t bring herself to step over this spider. What are we going to do? Luckily her husband is close at hand and drops his towel over the spider. No longer in sight, Heather happily steps over the spider and heads for shore.

Everyone gets creeped-out by large spiders so this is the happy ending.