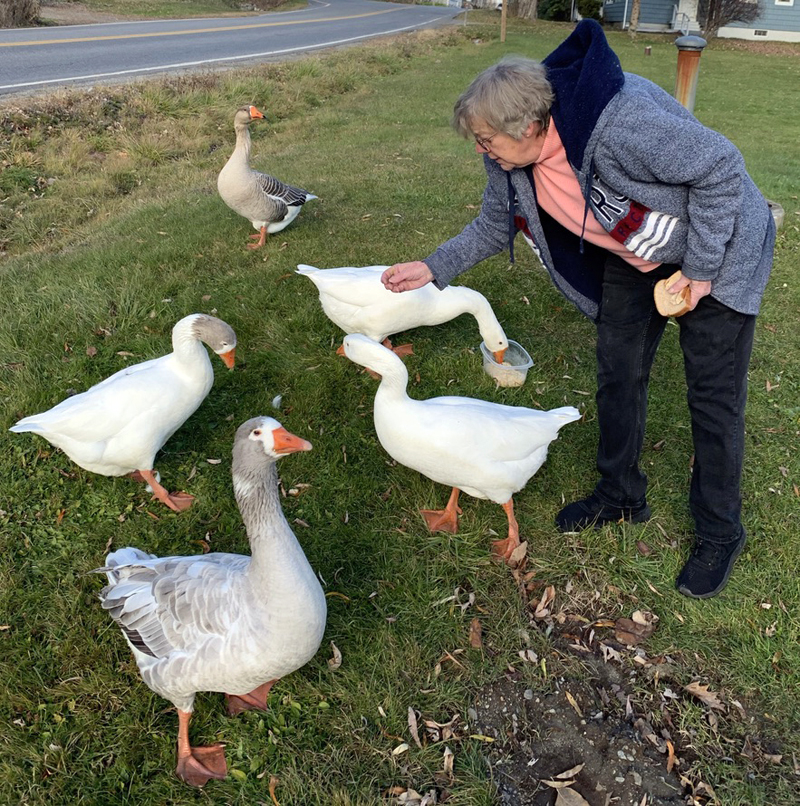 Phyllis Elwell, aka Mother Goose, and her babies. (Courtesy photo)

This is a tale of the Mother Goose of Damariscotta Mills. I’m sure you remember the Mother Goose of children’s nursery rhymes. She’s often depicted as a kindly lady in bonnet and shawl riding on the back of a giant goose and bringing tales of wonder to little children.

The village of Damariscotta Mills has a number of unique and interesting sights. To name just a few, the village sports a fish ladder, a historic mansion, the first Catholic church in America, and the Mill Pond Inn. How many villages have an inn run by a Godfather and his wife?

Well, all those things are interesting and seemingly tough to beat, but Damariscotta Mills can lay claim to a real-life Mother Goose. Our mother goose is Phyllis Elwell and she’s accompanied by her husband Bob. They are the caretakers, guardians, and friends of a flock of geese that live in Damariscotta Mills.

These geese are unique in many ways. For starters, they don’t belong to any one living in the village. The geese were dropped in the Mills years ago and decided to live their lives here. Obviously, these geese are really smart as the Mills is a great place to live, and they are also really lucky because they were adopted by a kind and generous husband-and-wife team that have taken care of them for the last three years.

When the geese first arrived years ago, Deb Wilson, a resident of the Mills, began to look after them. Deb fed and cared for them for a number of years. The flock was large then, approximately 11 members. After years of devoted care, Deb witnessed a goose she name “Wingman” being attacked and killed by two juvenile bald eagles. Wingman’s death was gruesome, as nature often is, and very disturbing. According to Phyllis, it was at that point Deb decided that she could no longer feed and care for the geese. That was three years ago, and Phyllis and Bob have been caring for the flock ever since.

You might wonder what’s involved in caring for a flock of geese. Well, feeding them is job one. You might imagine that Phyllis and Bob drop by a couple of days a week, leave a bucket of corn and that’s it. Well, you would be wrong. Every day of the year, in every season of the year, they drive to the Mills to feed the geese. They always feed them in the same location near the water’s edge and always at the same time of day. They feed them by hand and call each of them by name: Himself, One Eye, Daisy, Bully, Timid.

Part of the job is shooing away a mob of competing ducks to ensure that the geese get most of the food. The ducks are masters at getting some portion of the food, and they get pretty fat picking up the scraps. A 50-pound bag of rough cracked corn ($13 at Louis Doe’s every two weeks) keeps the flock healthy and well fed. 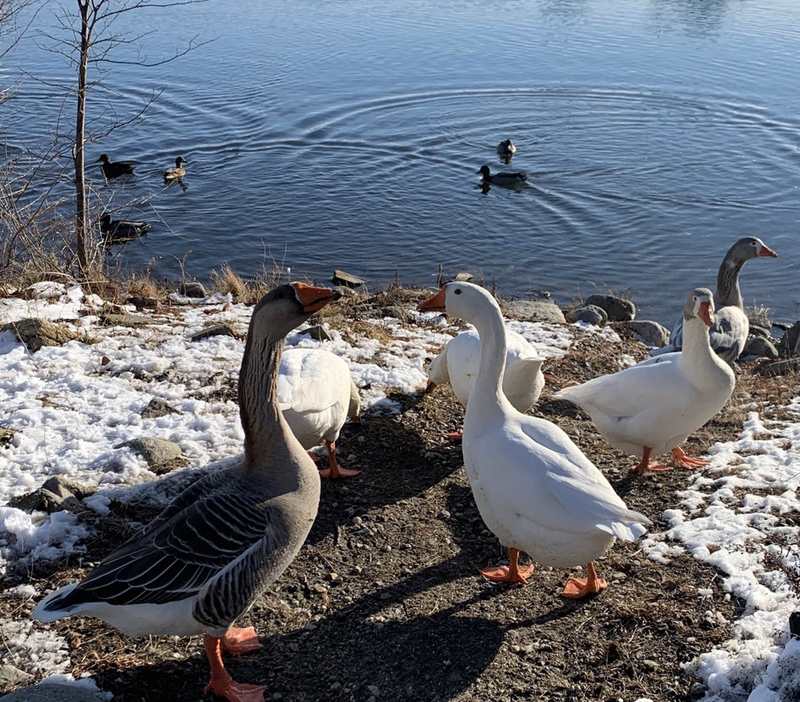 The flock has slowly diminished in numbers over the years, and now it’s down to six geese. A few months back, a wild Canada goose joined the flock but it was also killed by juvenile eagles. In spite of that unfortunate loss, Phyllis and Bob do everything in their power to keep the geese safe. The geese are so at home in Damariscotta Mills that you will often see them on the side of the road and, of course, in the road. At their leisurely pace they file across the road, seeming to take forever for six or so geese to slowly waddle across the road. They form a line that strings completely across the road.

And when the geese cross the almost always busy Route 215, they do a remarkably good job of slowing the traffic down to roughly the speed limit for the most part. They often cross the road to graze on the grass lawns of the local residences. It’s crossing the road that presents the greatest danger to the geese.

To emphasize this point, Phyllis tells a story of an incident with a couple of cars as the geese were attempting to cross the road. Seeing the oncoming cars and fearing that the geese might be in danger as they crossed the road, Phyllis stepped out in the street, placing herself between the cars and the geese. Fortunately, the cars were able to stop without hitting her or the geese. But Phyllis hadn’t noticed that the second car was actually a police cruiser.

The officer stopped his vehicle and told Phyllis that her life was more valuable than the lives of the geese, and that she should be very cautious about stepping out into the street in front of oncoming traffic.

In her most polite voice and, as any real Mother Goose would do, Phyllis said, “But officer, these are my babies!”