Half of Maine’s annual energy bill goes for transportation. It comes to about $3 billion — or $2,256 for every man, woman, and child — and it all leaves our economy. When we say “transportation” in rural Maine, we mean cars and trucks — there is simply nothing else. Or is there? This is no idle question: our population is aging, we can’t afford this expense, and some of us can’t drive much longer. So, let me explore this question a little further. 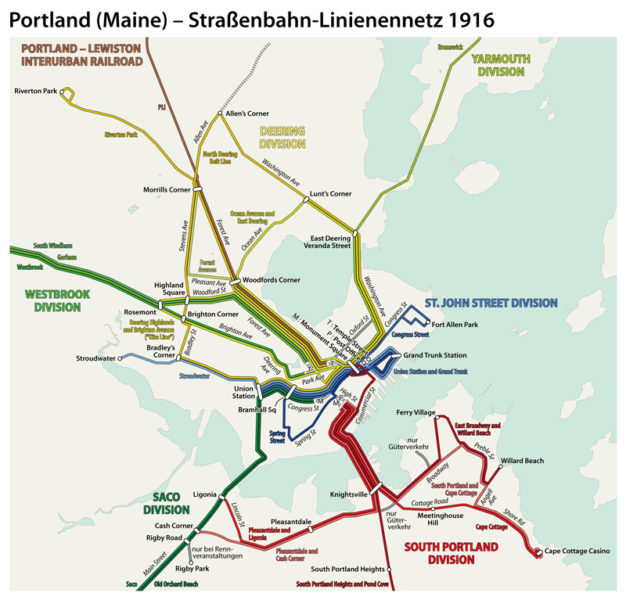 As this German map shows, 100 years ago we used to have a stellar public streetcar and interurban rail transit system in Maine. Then somehow we went off the rails. Having progressed with the rest of the developed world from the horse-drawn omnibus through the horse-car to the electric street railway, we decided to pave over the tracks, beginning in the late 1920s, mainly at the urging of an unethical bus manufacturer. In efficiency and energy terms, this move cost us dearly – and still does.

Here is why: It only takes eight pounds of force (1/248th of the whole weight) to move one ton of mass on a level railroad, but a force 20 times greater, 160 pounds (1/12th of the whole weight), is required to move the same one-ton weight on a level road. This is because a steel wheel rolling on a steel rail is subject to 85-99 percent less rolling friction than a rubber tire is subject to rolling on an asphalt or concrete pavement.

Where does the “lost energy” go? Feel your car’s rubber tires after a trip. Even on a cold winter day they are hot to the touch. That heat is produced by repeatedly bending and rubbing the tire’s rubber on the road. Much of a car’s gasoline is, in fact, consumed by bending and wearing out tires instead of moving the car forward.

Car and truck tires flatten into “footprints” on the pavement. In contrast, steel wheels on steel rails bend imperceptibly and wear very little. The footprint of one truck tire is about one square foot.

There are 18 wheels on a “semi” – that’s 18 square feet per truck. In contrast, the footprint of a steel wheel on a steel rail is about the area of a dime. There are only eight wheels on a rail car, which carries many times the weight to boot.

Think about all this with an open and creative mind when crossing one of our many unused or little-used rail lines in Maine. Your insights may be just what we need to cut our transportation bill by a spectacular amount.