Coffee is one of the world’s most popular beverages. It supports a multibillion-dollar economic sector, including tens of thousands of smallholder farmers worldwide. The global coffee trade relies on two species: arabica (60% of traded coffee) and robusta (40%). A third, liberica, is cultivated as a grafting rootstock for the other two. Arabica and liberica occur naturally across much of Africa.

Arabica coffee has been farmed for several hundred years and may have been wild-harvested for millennia. Robusta was first farmed in Africa in the early 1800s. Cultivated and wild variants of both species are harvested and processed to produce coffee with similar qualities.

Cultivation of robusta outside Africa developed rapidly from the early 1900s onward. In many cases it replaced arabica, gaining market share due to its resistance to coffee leaf rust, higher productivity, and lower market price. Robusta is also favored for its high caffeine content and ability to add body to espresso-type coffees. It is also the species of choice for instant coffee.

From a poorly known minor African crop, robusta has become a major contributor to the coffee sector’s sustainability, both as a direct replacement and as a breeding stock for new cultivars. However, wild-growing coffee species are just as important for the sector’s sustainability. Despite the overwhelming success of arabica and robusta, new threats to the species are constantly emerging, like climate change — especially the increasing frequency and duration of drought — and the spread and escalating severity of devastating fungal pathogens, coffee wilt disease, and other diseases and pests.

At least 60% of current coffee species face extinction, according to recent studies. Coffee trees don’t thrive in extreme temperatures. They prefer the relatively cool mountainside regions in the tropics. In Brazil, warmer temperatures and weather extremes have already begun to affect yields.

Climate change also threatens wild native coffee trees in Ethiopia that are a valuable source of genetic diversity, especially since growers need new strains that can thrive as the planet heats up. Ethiopia is Africa’s largest coffee producer and the world’s fifth-largest exporter of arabica coffee.

Ethiopian coffee is mainly grown under the shade of trees (shade or forest coffee), but also in some areas with little or no shade (sun coffee). Irrigation is confined to a few locations where water is easily available. The use of chemicals, such as pesticides, fungicides, and artificial fertilizers is rare — so Ethiopian coffee can be considered as organic by default.

But Ethiopia’s climate is changing. The mean annual temperature increased by 1.3 degrees Celsius between 1960 and 2006. Under a high emissions scenario, an increase of more than 2 degrees C. could occur by mid-century across much of Africa and exceed 4 degrees C. by the end of the century.

Mid- and late-century projections for rainfall over Africa are uncertain. Regional climate models suggest drying over most of Uganda, Kenya, and South Sudan by the end of the 21st century, especially in August and September. Coffee growing in Ethiopia has already been negatively affected by climate change, a trend that is expected to continue over the coming decades.

Relocation of coffee farms will be a key component of building resilience for the Ethiopian coffee economy. Adaptation measures like irrigation, tree shade management, mulching, terracing, and pruning could further ensure resilience. Forest preservation and reestablishment, and good soil and watershed management will also play a significant role in adaptation. Prevention of forest loss is key, especially in the southwest and southeast coffee zones, where recent deforestation rates have been high, and could have an even more significant impact than climate change, at least in the short to medium term.

As for chocolate, the prognosis is dire. Most of the world’s cocoa is grown by smallholder farmers in Africa. However, due to the combination of changing climate and crippling poverty, Africa’s cocoa farmers have had to switch to other crops to survive. In four decades, the land area available for growing cocoa has shrunk 40%. In the next 40 years, the temperature in Ghana and Ivory Coast, where 70% of cocoa is grown, is set to rise by 2 degrees C., making it too hot and dry for cocoa trees. The world will likely start feeling the shortfall this year when, according to a report by the Earth Security Group, world cocoa demand is set to outstrip supply by more than a million tons.

Imagine! No morning coffee. No hot chocolate. No chocolate heart for your valentine. I’d rather rise to the challenge of climate change.

(Paul Kando is a co-founder of the Midcoast Green Collaborative, which works to promote environmental protection and economic development via energy conservation. For more information, go to midcoastgreencollaborative.org.) 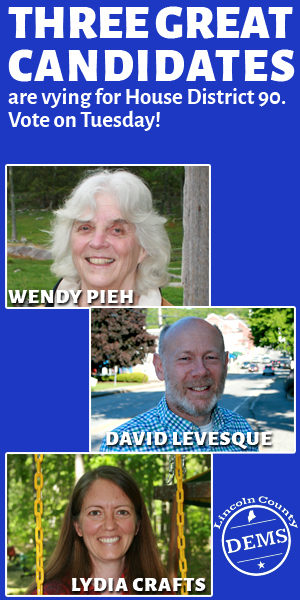