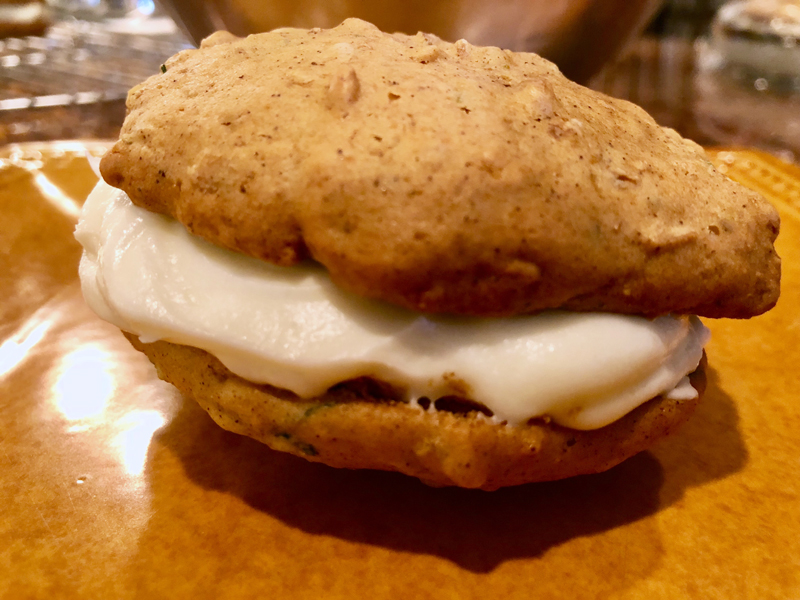 Zucchini is a popular summer veggie, prolific around this time of year in Maine, as it’s one of the easiest vegetables to grow. But it’s a little lacking in taste, unless you roast it with plenty of garlic, salt, and olive oil. Then it’s yummy. But what isn’t yummy with garlic, olive oil, and salt? And with some Parmesan cheese thrown on top to turn golden brown when roasted? Duh.

Zucchini, or courgette, is a variety of summer squash, actually a fruit, and it’s been around for around 10,000 years, according to draxe.com. It’s low in calories, carbs, and sugars, and high in several nutrients and antioxidants.

But the first time I had zucchini bread I was pleasantly surprised. Shredded, mixed with flour, sugar, and eggs, and some cinnamon, it’s more like cake than bread. 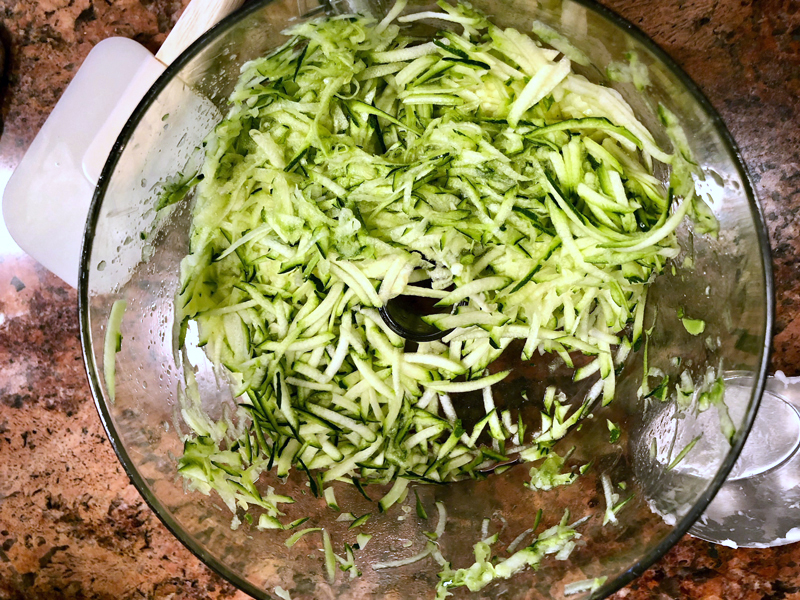 Shredded zucchini  press out the excess moisture with the base of a Manhattan glass, being careful not to spill. (Photo courtesy Lise Roy)

Then there’s chocolate zucchini cake. OMG. I love chocolate cake, and this is about the best chocolate cake out there. I was craving some the other day and decided to make it. Then I stopped at Spear Farms in Waldoboro, and voila! The baker, Jessica Barbour, with help from her sidekick and fellow baker, Glenda Robinson, had made some for me.

Well, not exactly for me, but there happened to be one loaf of chocolate zucchini bread (same difference) sitting there calling my name. Plus it was another of those hot, humid days that have tormented us this summer, and the thought of turning the oven on wasn’t appealing.

I’ve eaten half of it and it’s every bit as good as mine. It’s a pretty basic recipe, and I’m willing to bet most of you have one, so I’m going to move on to another sweet zucchini treat I had a couple weeks ago: zucchini whoopie pies. 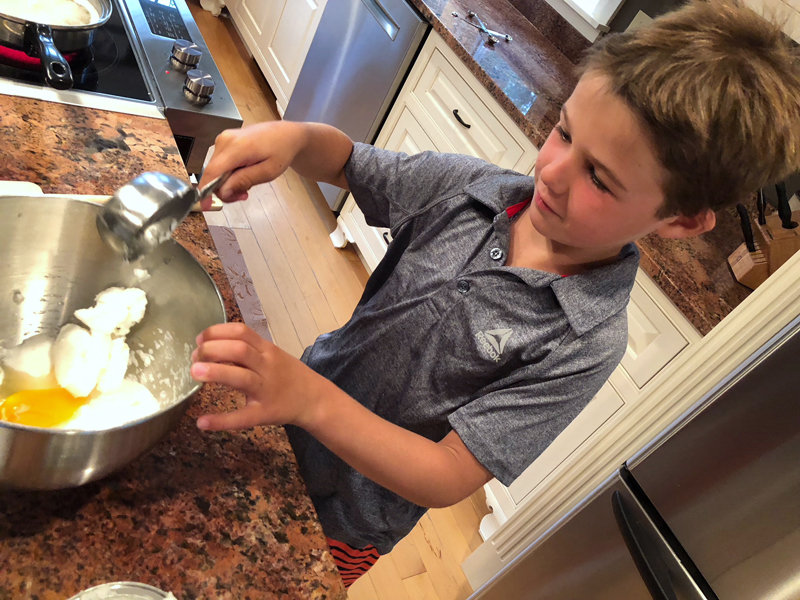 My sister Wendy’s childhood bestie, Lise Roy, made some for my mother’s celebration of life on Aug. 4. After my mother, they were the main topic of conversation. I’m not really a fan of whoopie pies, but these were ridiculous! The creamy white stuff inside wasn’t your typical whoopie pie filler – it was buttercream.

People were walking around with a glass of wine in one hand and a whoopie pie in the other. They seemed really happy.

Lise is one of those people who never shows up empty-handed when she comes to the cottage. In fact, she and her husband, Kenny (my brother Peter’s childhood bestie), always show up with more food and wine than however many people happen to be there at a given time can consume over a couple days.

They brought baked beans, made with my mother’s recipe, too. Generous, and thoughtful, Lise and Kenny. 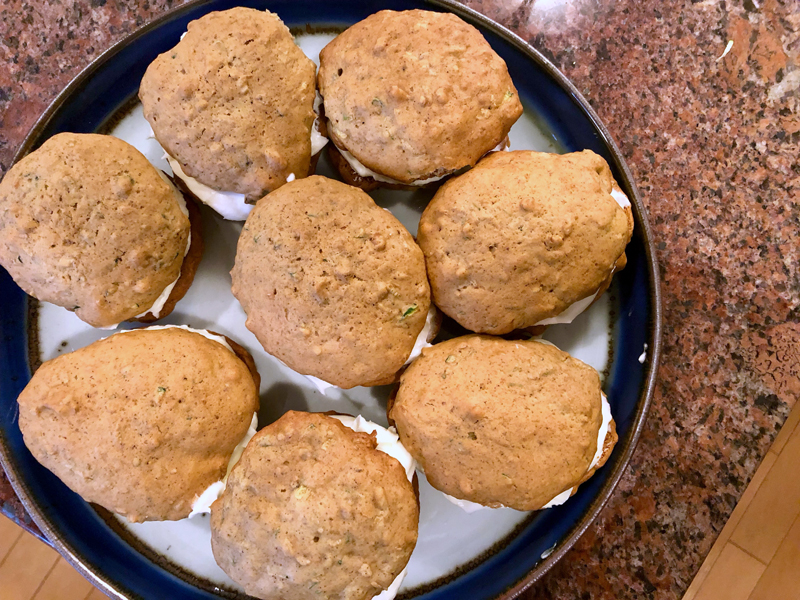 According to whatscookingamerica.net, whoopie pies are considered a “New England phenomenon and a Pennsylvania Amish tradition.” They’re sometimes referred to as “gobs” in Western Pennsylvania. Gobs – that cracks me up.

Also according to that website, when Amish children found one of the gobs in their lunchbox, they’d shout “Whoopie!” Seriously? Who knows. I’d be more apt to shout “Whoopie!” if I found a Manhattan in my lunchbox.

The Labadie’s Bakery in Lewiston started selling whoopie pies in 1925, according to the site, and the Berwick Cake Co., in Roxbury, Mass., started making them sometime around 1930.

The whoopie pie is now the official Maine treat. 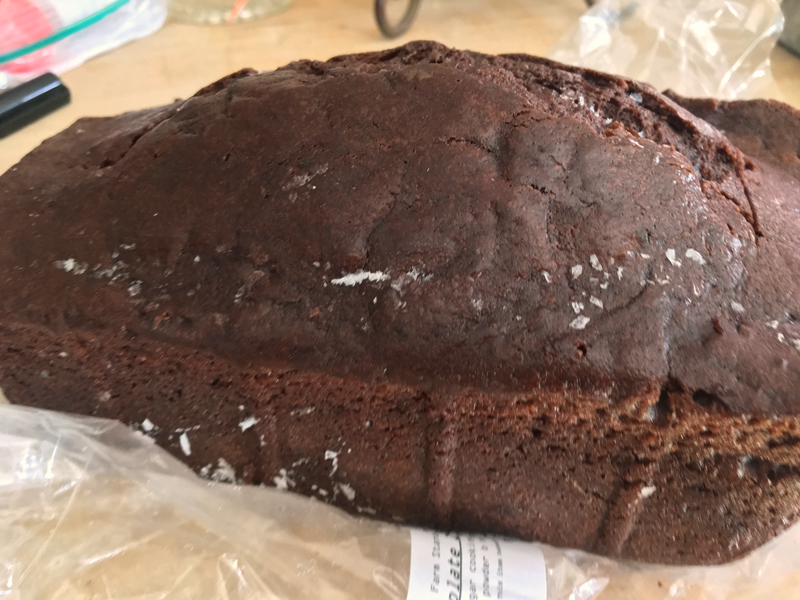 Lise’s whoopie pies were a huge hit at my mother’s celebration of life, and she shared the recipe with me, so here ya go:

In another bowl, cream 1 cup sugar with ½ cup shortening. Beat an egg and throw that in, along with 1/2 cup milk and a teaspoon of vanilla. Blend with flour mixture. Then add 2 cups shredded zukes and, if desired, a cup of walnuts. Sometimes the shredded zucchini is pretty wet, so I throw it in a strainer and press down with the base of the Manhattan glass I’m most likely holding, being careful to not spill.

Spoon gobs 🙂 onto a baking sheet and bake at 375 for eight to 10 minutes, while you’re making the filling: cream a stick of butter with 8 ounces of cream cheese and a 16-ounce box or bag of confectioner sugar. Throw in a teaspoon of vanilla.

Make the gobs. If I have to tell you how to do that, you should probably just go out and buy them.