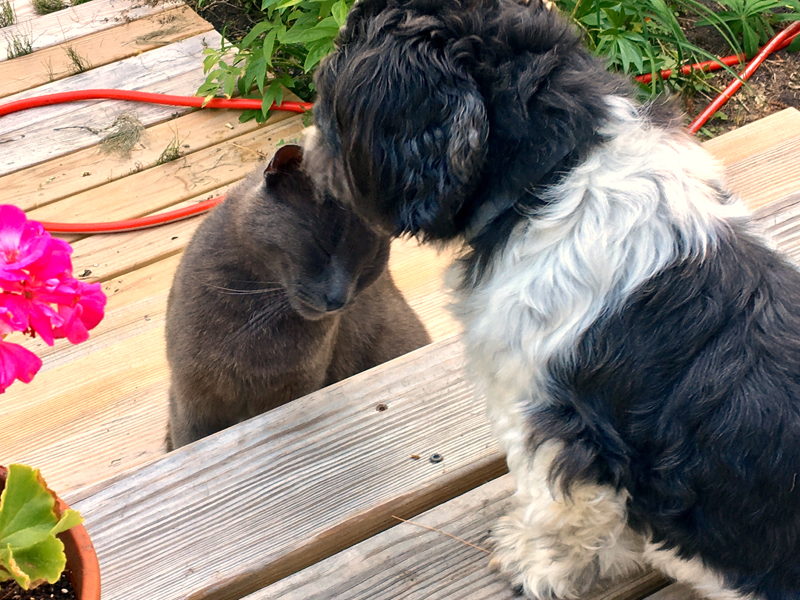 Bunny, “my” stray, was happy to see her boyfriend, Elliot, after a long weekend away. (Suzi Thayer photo)

Labor Day weekend is over. How is that possible? The older you get, the faster a year goes. Of course that’s not true. A minute is still a minute, an hour is still an hour, a day is still a day, and a year is still a year. But still.

Labor Day, on the first Monday in September, began in New York City in 1882, when the first Labor Day parade was organized by the Central Labor Union.

According to theconversation.com, one New York Tribune reporter said the day was just a long political barbecue with “rather dull speeches.” I can kind of relate to that. I’ve spent too many Labor Days at barbecues with someone, probably uninvited, making my eyes glaze over with dull speeches.

For many, Labor Day simply means a cookout, with beer, or Manhattans 🙂 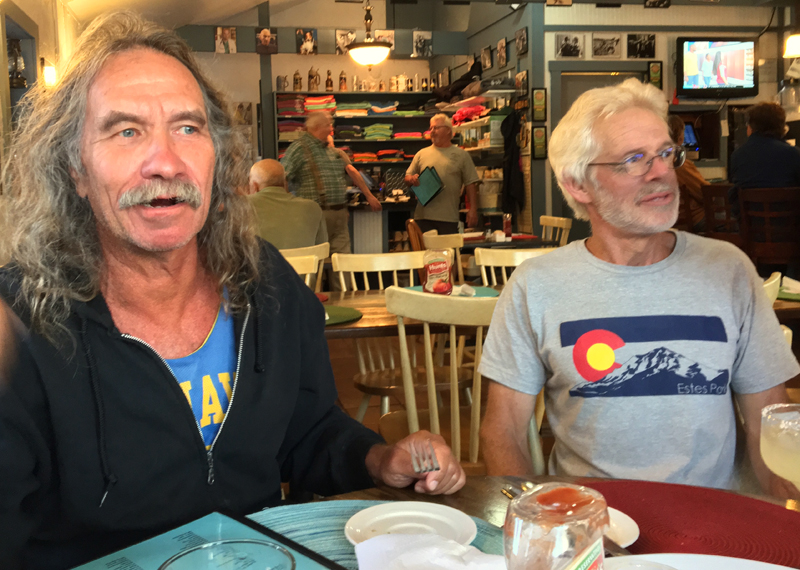 For summer people, and regular people, like me, with cottages along the shore, it means the last hurrah for another, even shorter year.

I had my last hurrah at the cottage. On Saturday morning I packed my car to the gills with clothes; food; my dog, Elliot; and my kitty, Ruby-2-Shoes.

I meant to pack some bourbon, sweet vermouth, and cherries, but somehow forgot. Luckily our neighbors, the Wissemanns, had plenty.

After I got to the cottage and unpacked, and got Elliot and Ruby settled in, I headed to St. George, right across the Georges River from the cottage. I didn’t take a boat though. I drove.

My old friend, Brenda (Vose) Falla, had contacted me through Facebook a couple weeks before, and we had decided to get together after 50 (some long, more short) years. We were waitresses, back when that word was politically correct, at Our Place, the Olsons’ restaurant, just down the dirt road from the cottage.

I’ve told you about the owner, Betty Olson, slurping enormous, gross, raw clams out in the kitchen, and about the time Betsy Wyeth came for lunch, hoping for fried clams, but there were none because Betty had eaten them all, raw. Ugh.

Anyway, talk about the good old days, those were them. Back when a summer lasted forever, before time started flying. 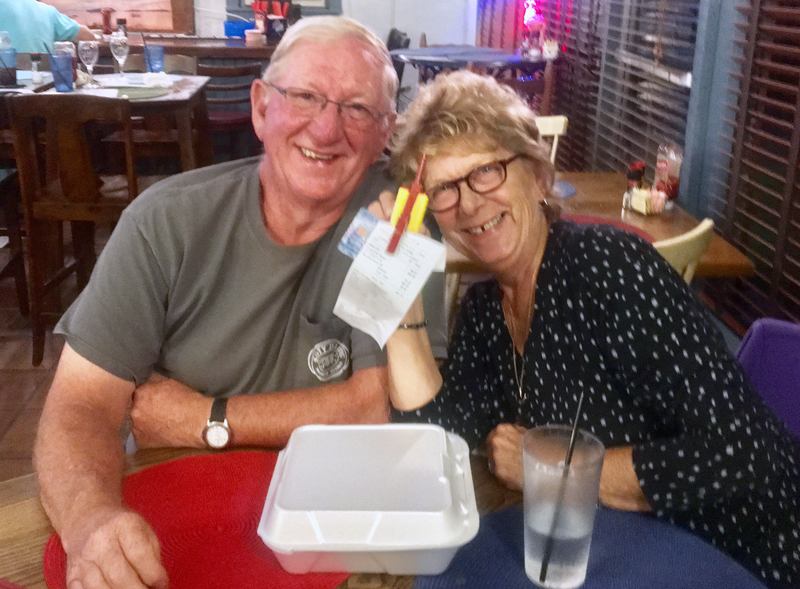 Brenda’s mother, Bea, worked in the kitchen with Barbara Stimpson. Barbara and Bea made the most awesome pies I’ve ever had. I’m not just saying that. They. Were. Awesome.

I already gave you the recipe for the shortbread-like pie crust they made, and I’m not going to tell you again. I’m kidding. If you didn’t have the foresight to save it, email me and I’ll give it to you. It’s the best, easiest, melt-in-your-mouth pie crust ever.

So off I headed to St. George. My brother, Pete, and his longtime friend and fellow limerick writer, Jeff Brown, came to the cottage for the weekend too. We met up with Brenda and her husband, David, at their house in St. George, then went to the Happy Clam, right down the road in Tenants Harbor, for dinner.

It was a blast, and the food was fabulous. One of the owners, who is German, is the chef, and the menu ranges from seafood to prime rib, to German specialties. I started with a Manhattan (duh) and had fried clams. They were perfect. Others had prime rib, and still others had German dishes. It was all totally ridiculous. 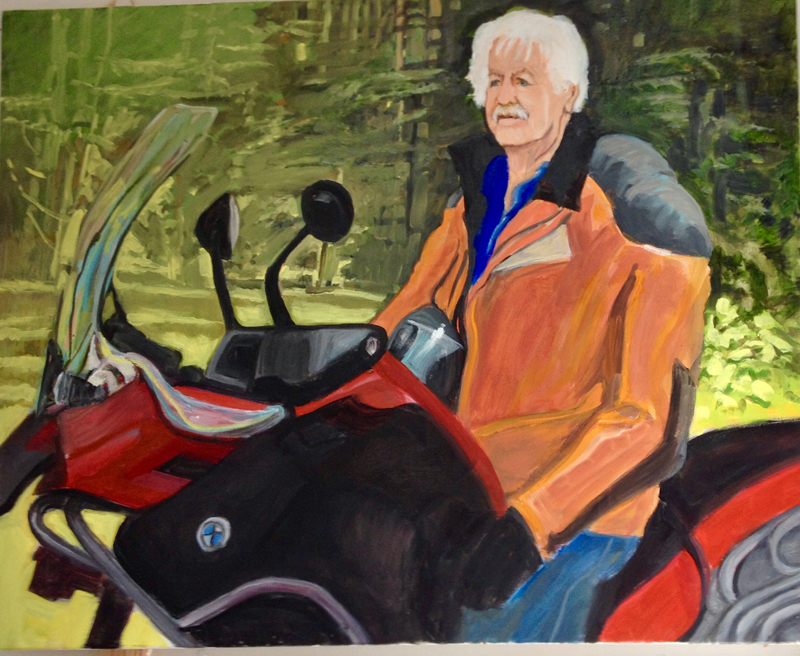 There was no break in the conversations throughout dinner. Brenda and I had way too many years of catching up to do, and David, Pete, and Jeff shared the same, somewhat perverse, sense of humor.

David told them a story about a time when he and Brenda were in Colorado. It was funny, but I can’t repeat it here. After we got back to the cottage, Pete and Jeff wrote a limerick about it. Limericks are five-line poems, and most aren’t appropriate for a family newspaper. Sorry.

The next morning we had pancakes and scrambled eggs for breakfast, and hot dogs for lunch. Boring. Sorry.

On Sunday we went next door to the Wissemanns for Manhattans at 5, along with cousin Richard. I mixed up a few batches of Manhattans, and Nancy, a painter, unveiled a painting of Richard, with his motorcycle.

Then Pete, Jeff, and I wandered back over to the cottage and made crab rolls, and boiled some corn. We delivered some to Nancy and John, then had dinner. I went to bed, and Pete and Jeff went out to the porch and composed more limericks. They never tire of that.

Ruby-2-Shoes, aka Goldilocks, tries out one of the beds at the cottage. It was just right. (Suzi Thayer photo)

Ruby had a great time at the cottage, after a few weeks of not doing so great. She spent a lot of time trying out the different beds in the four bedrooms. Her new nickname is Goldilocks 🙂

For “my” stray cat, Bunny, Labor Day meant a long weekend without fresh food, water, and, worst of all, her boyfriend, Elliot. She’s smitten. Every time I walk out the door, she appears, looking for him. She acts like a love-struck teenager, cooing and nuzzling him, sometimes with so much force she shoves him and falls over. Kills me.

She was waiting on the deck when we arrived home on Labor Day. She was happy to see us, and Ruby and Elliot were happy to get home. Happy campers all around.