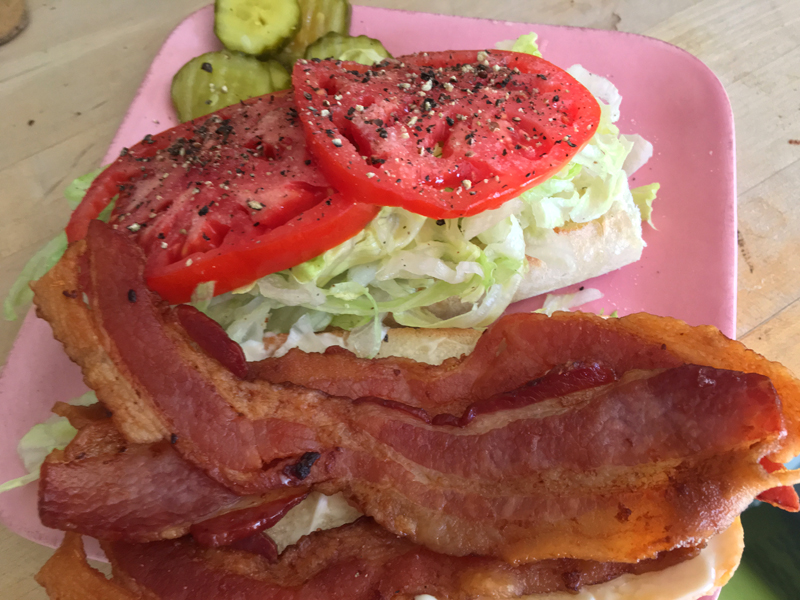 A BLT, before it’s slapped together. (Suzi Thayer photo)

You know what BLT stands for. CEC stands for chocolate egg cream. Together they make ATAM: a totally awesome meal.

I hadn’t made a BLT in way too long, when I saw a photo of one on a Facebook friend’s page. Thanks Peter Ross. He’s a chef and he’s always posting photos of great-looking food. That’s all it takes for me – power of suggestion.

I wrote about sandwiches and how toothsome 🙂 they can be a few weeks ago, but I neglected to mention the BLT. Or maybe I did. I forget, and I’m too lazy to go back and look. I do know I didn’t get into a long diatribe about it, like I’m going to do here. 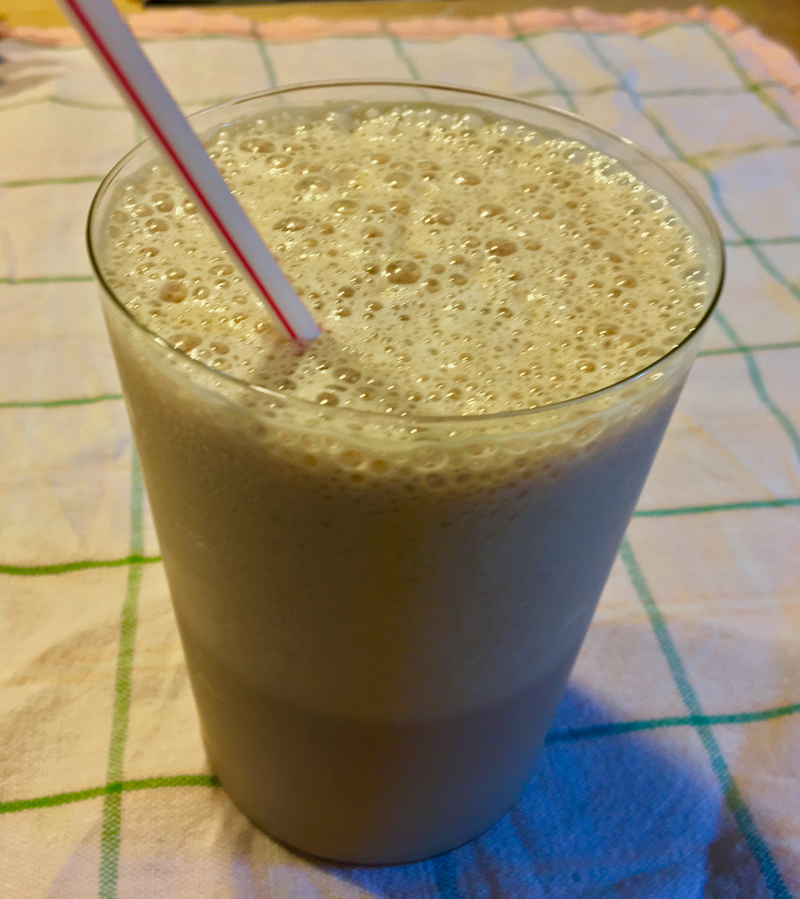 Of course I had to Google it. I know you’re dying to know when the first BLT was made.

OK, I swear I didn’t see this before I suggested a chocolate egg cream with a BLT. I just learned that in a 1951 edition of The Saturday Evening Post, this was written in reference to a BLT: “On the tray, invariably, are … a toasted sandwich of bacon, lettuce, and tomato, and a chocolate milkshake.”

I just polished off a BLT and a chocolate egg cream, which is very similar to a chocolate milkshake. And if you’ve never had one, you will now. I’ll get back to that.

Anyway, there’s not much evidence of BLTs before 1900. Apparently the BLT only started gaining in popularity after World War II, due to the expansion of supermarkets, making the ingredients available year-round.

But seriously – think about it. Imagine biting into some good toasted bread through crunchy shredded lettuce, a thick slice of a sweet tomato, and some perfectly cooked bacon. A good BLT is one of the most ridiculously sublime things you can eat.

Baker’s Way, a Vietnamese restaurant in Boothbay Harbor, has great Vietnamese food. (Duh). It also has the biggest, best BLTs in the world. I think. It’s not like I’ve had BLTs in Italy, France, Germany, or Spain. Or even New York City or California. But every time I have one from Baker’s Way I say it’s the best one I’ve ever had. Just like the Italian sandwich at Mediterranean Kitchen.

The owners of Baker’s Way make their own bread, and they cut big, thick slices and toast them for the BLTs. The bacon is always perfectly cooked – they bake it – baked bacon from Baker’s Way 🙂 and they don’t skimp on it. They make the sandwiches so fat it’s hard to open your mouth wide enough to take a bite. 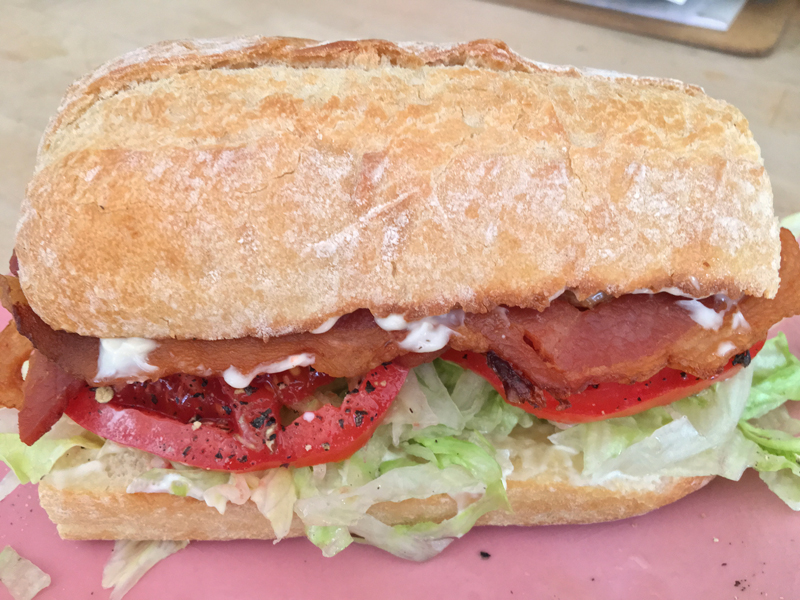 A BLT on a crusty roll. Have one for dinner. Tonight. (Suzi Thayer photo)

Then there’s the chocolate egg cream.

Egg cream sounds old-fashioned, doesn’t it? That’s because it is. It’s something your parents or grandparents might have ordered in an old-fashioned soda fountain. And I have no idea why it’s not an everyday item in restaurants, takeout stands, and food trucks now. 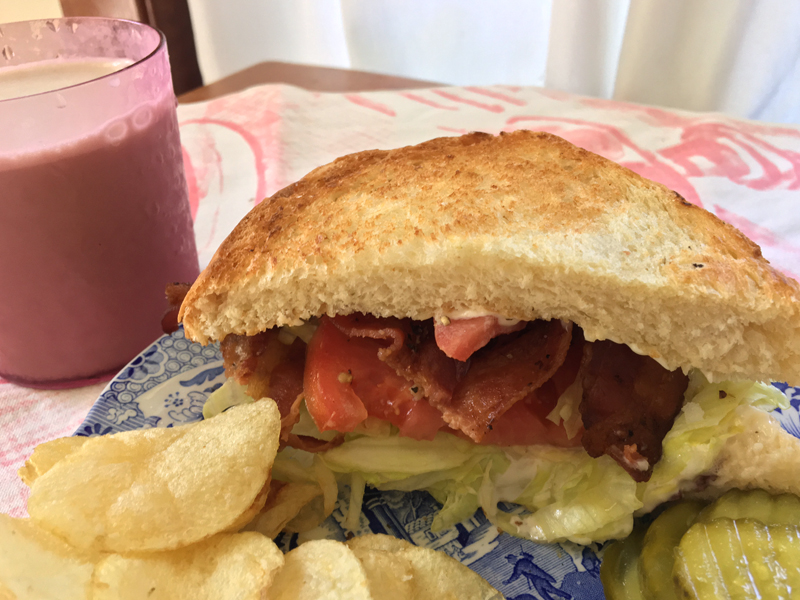 A BLT with a CEC makes for ATAM. (Suzi Thayer photo)

It’s simple and it’s ridiculously delicious. Oddly there’s no cream and no egg in it. It’s made with milk, seltzer, and flavored syrup, typically chocolate.

Here’s your second history lesson for this week:

According to What’s Cooking America, some accounts tell of the egg cream originating in New York City sometime around 1880, when a young Yiddish theater star, Boris Thomashevsky, asked to have one made after having tasted a similar drink called “chocolate et creme” in Paris.

But, the story continues, according to most historians, the egg cream was created in the early 1900s by a Jewish candy shop owner, Louis Auster, in Brooklyn, N.Y. “It is reported that 3,000 egg creams a day were sold until the day the store closed.” 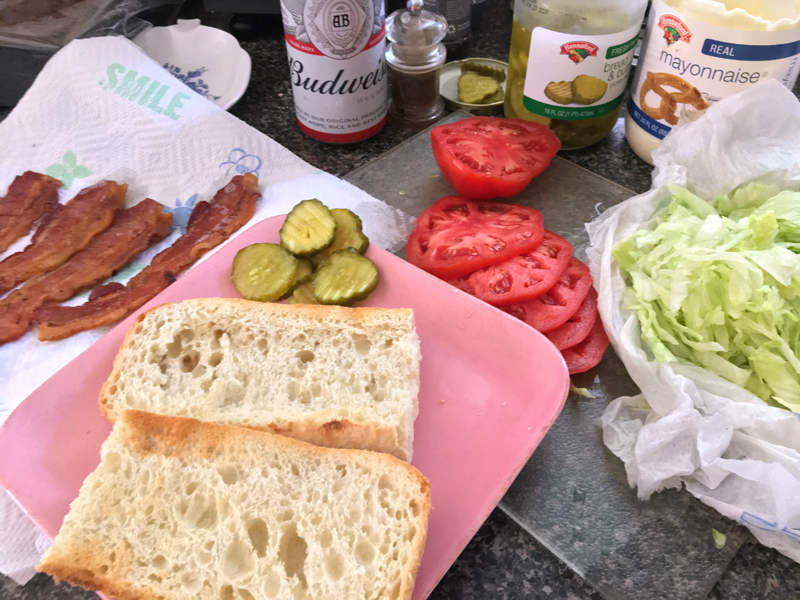 Mise en place 🙂 for a BLT, with a Bud. (Suzi Thayer photo)

If I’d been around I probably would have accounted for one of those 3,000 each day.

Here’s how to make one: mix some choco syrup and milk in a container with a cover. Stick it in the freezer to get it good and icy cold. Take it out and shake it like crazy, to work up a good foam. Fill an (ideally old-fashioned, Coke-shaped) glass half-full, and add cold seltzer till bubbles are almost spilling over the top. Stick a straw in it, preferably paper.

Have a GOOD BLT ready. Eat and drink. And, as my cousin Janet would say, “Enjooooy.”