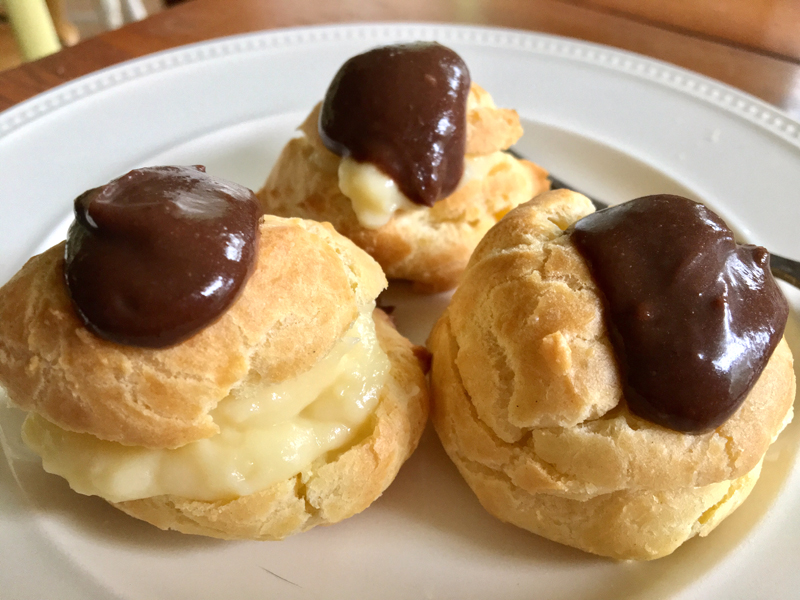 Cream puffs, also called profiteroles, are totally ridiculous and, well, creamy, puffy bundles of heaven. When was the last time you had the pleasure of biting into one? And I’m not talking about the ones you find in the frozen section at the grocery store. I’m talking about a freshly made cream puff.

I don’t remember the last time I had one, before last week, aside from the frozen ones. They’re OK, but they’re a whole different ballgame from the ones that are a few minutes out of the oven before being filled with creamy lusciousness.

The thing holding the dreamy, custard-y stuff inside is called a “pate a choux.” It’s the shell of the cream puff, and it’s a poof of light and airy, just slightly crunchy, goodness.

I went to a cream puffs class last week. It was given by Alex Tallen, the pastry chef at the Boothbay Harbor Country Club. 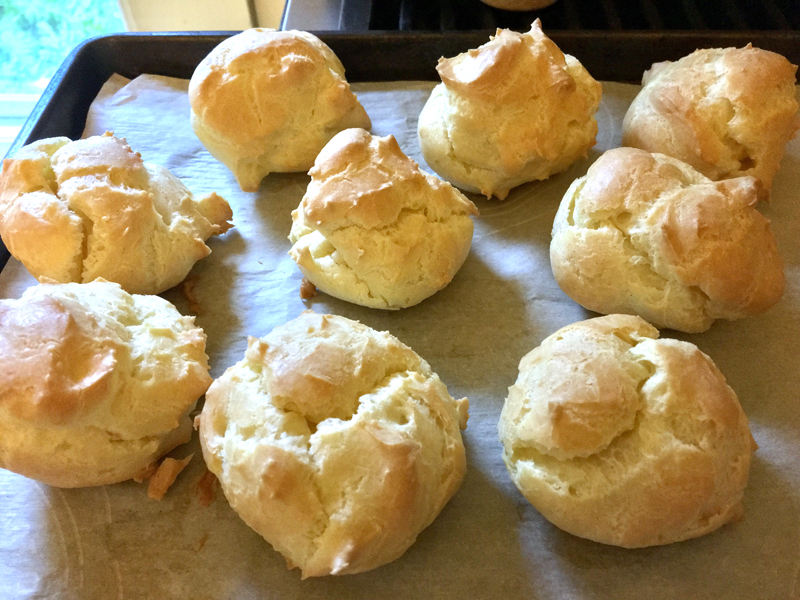 The puff pastries, fresh out of the oven, before being filled with creamy lusciousness. (Suzi Thayer photo)

Alex earned her grande diplome from a cooking school in Paris, the Ritz Escoffier, and it shows. She knows her way around a pastry. Her cream puffs, with the creative, gourmet touches she added, took almost three hours from start to finish.

We lucky recipients got to bite into them when they were less than five minutes old. They were puffy, golden-brown shells full of rich, creamy custard and a touch of chocolate.

It was kind of torturous sitting there watching Alex make them, but so worth the wait. They were awesome. She gave us her recipe, but it’s all in weights as opposed to the measurements we wannabe pastry chefs are used to, so when I made them in my own kitchen I cheated. I Googled cream puffs and found a pretty easy recipe. Don’t tell Alex. 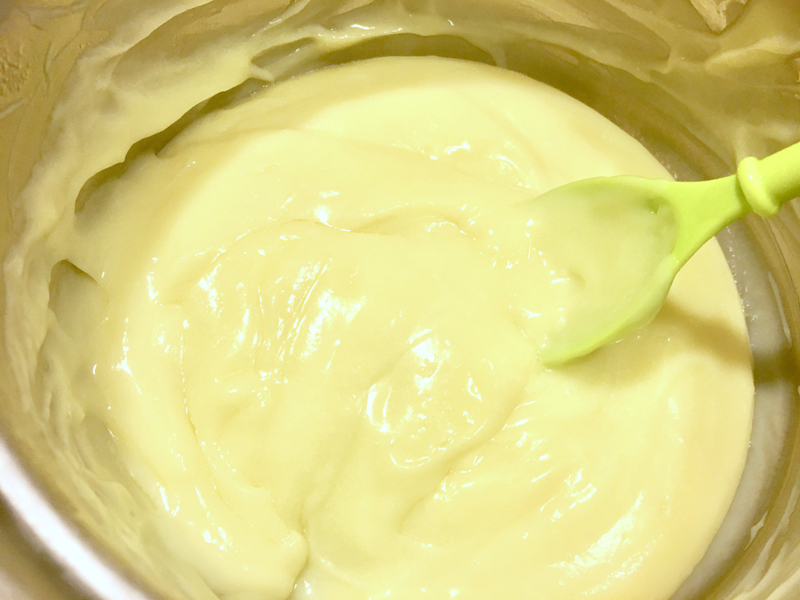 And, of course, I had to research the origin of profiteroles. If this stuff bores you, you can skip over it. Duh.

One theory, from ilovetoknow.com, is that they were first made by Catherine de Medici’s chef. But wait! It goes on to say: “Unfortunately, this myth is probably just that – a myth. … (Catherine’s) cook did not invent puff pastries, nor did he invent the cream puff. The ancestor of the cream puff can be traced back to the Middle Ages.”

It does appear that the first mention of cream puffs in the U.S. was on a menu at the Revere House Restaurant in Boston in 1851.

I made cream puffs using a recipe from Martha Stewart. Here ya go:

Cut a stick of butter into pieces and throw them into a pan with a cup of water, 1/2 tsp salt, and a teaspoon of sugar. Bring it to a boil, then quickly stir in a cup of flour. It’ll start out lumpy. Keep stirring until a film forms on the pans bottom 🙂 I did this for around four or five minutes. My arm was starting to hurt, so I made a Manhattan while I let the chou paste cool in a bowl. That helped. 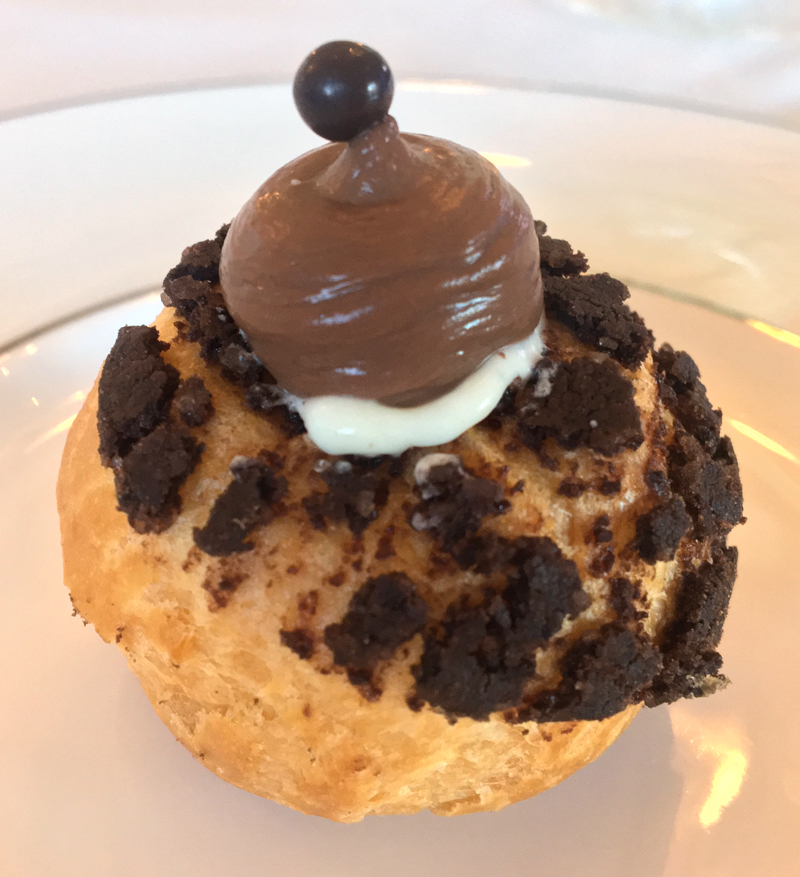 Meanwhile, loosely mix up four eggs, minus the mucilaginous lumps. Start adding that to the chou paste, stirring vigorously after each addition.

Pipe, or spoon small (around 1 1/2-inch) rounds of the paste onto a parchment paper-lined baking sheet and bake for around 30 minutes at 375. If you pipe it and there are points at the tops of the mounds, just smooth them with a wet finger.

The recipe called for brushing the tops with an egg wash. I didn’t bother, and they were fine.

OK – the pastry cream: whisk together 1/2 cup sugar, 1/4 cup cornstarch, and a pinch of salt in a saucepan. In a bowl, whisk together 2 cups whole milk and 4 egg yolks. Throw that into the pan, with a couple tablespoons of butter, and cook over medium/high till it comes to a boil. Let it boil a minute. Remove from the heat and throw in a teaspoon of vanilla. 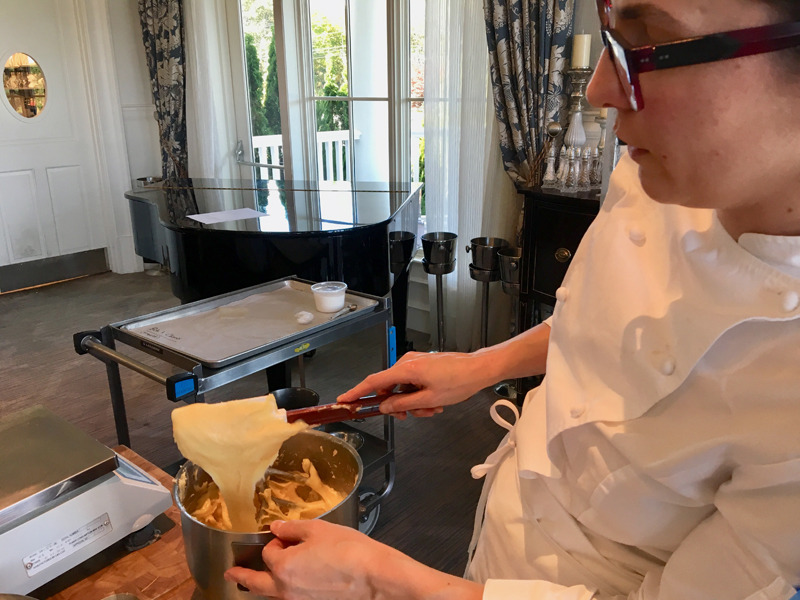 Cover it, right on the surface, with plastic wrap and let it cool. Then either cut little holes into the tops of the puffs and pipe the custard in, or cut off the tops and spoon in. Alex mixed fresh whipped cream into the custard, and I would have too, but I was too lazy to go get heavy cream.

I topped them with some of my shiny chocolate boiled frosting. I can’t claim they were as awesome as Alex’s, but they were pretty awesome.

P.S. Jan. 2 is National Cream Puff Day. I’m putting that on my calendar. And I have to say I’m looking forward to a new year. I’m ready to leave 2018 in my dust.