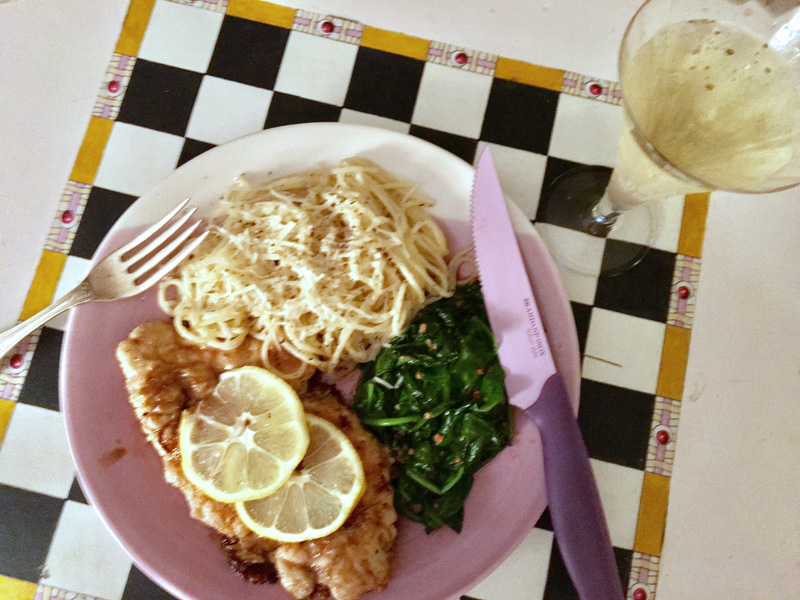 Chicken frances with sauteed spinach and cacio a pepe, and a glass of prosecco, made for a sublime meal. (Suzi Thayer photo)

I came across a recipe for chicken francese (aka francaise, aka chicken French) on the New York Times Cooking page the other day. I was like, “OMG, I’d forgotten all about this!” Comes with age. At 28, I find I’m forgetting a lot of things :-).

I often make chicken piccata, which is similar, with one big difference. I’ll tell you what that is in a minute. For now, suffice it to say that both are sublime, and both call for chicken (duh), eggs, flour, and lemon.

One of my ex-boyfriends (there have been a couple … OK, a few) made chicken francese back in the good old days, at his restaurants – McSeagull’s, in Boothbay Harbor, and Tufulio’s, at Sugarloaf.

Chicken francese was one of the most, if not the most, popular items on the menu at Tufulio’s. It was served with a side of pasta with a choice of a butter-and-garlic sauce or a red sauce.

The recipe on the New York Times Cooking site came from food writer Julia Moskin, and it’s very similar to Joe’s. It’s one of those simple dishes – quick and easy to prepare – that looks, and tastes, elegant. 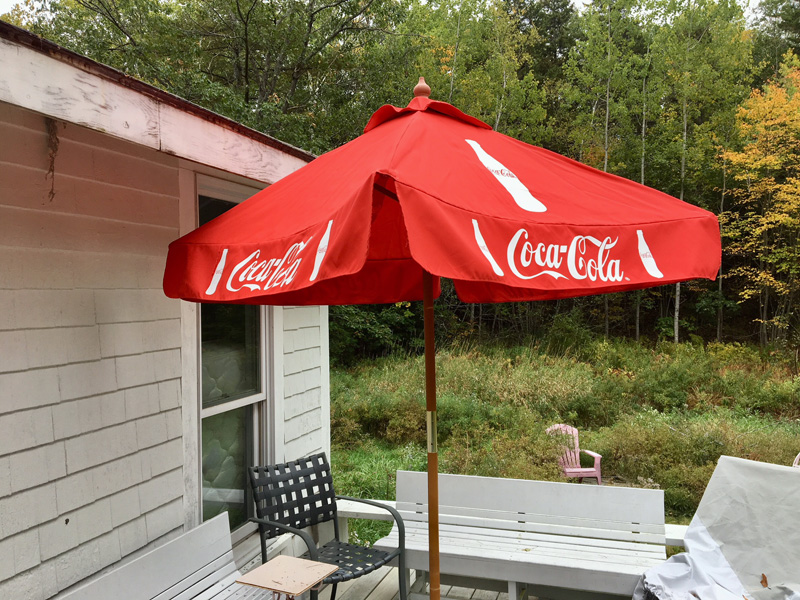 I got a new umbrella for my deck! (Suzi Thayer photo)

Though the name suggests that it’s French or Italian – frances is Italian for French 🙂 – it’s neither. According to thespruceeats.com, the dish originated in Italy, with veal: vitello francese, and it came to New York City, and the good old U.S., via Italian immigrants.

From NYC it made its way to Rochester, thanks to a large Italian-American community, where the less expensive chicken was substituted for veal. Maybe that’s why Joe migrated to Rochester after leaving Maine, and opened a second McSeagull’s on Lake Ontario. Maybe not.

The main difference between chicken piccata and chicken francese is the order in which you dredge the chicken breasts in egg and flour. Piccata calls for egg wash, then flour. Frances gets the flour dredge first, then egg wash, before throwing it into hot oil. Makes for a whole different outcome.

Both call for lemon, but piccata has some capers thrown in. Both are totally awesome, but as soon as I saw the photo of francese on the NYT Cooking site I virtually tasted it, and of course had to make it.

There are a few variations in the prep of chicken frances, but I’m a “keep it simple, stupid” kind of cook. That’s more because I like to taste the main ingredients in a dish without a lot of unnecessary added flavors. Plus I love cooking, and sipping a Manhattan while doing so, so why would I want to rush it? 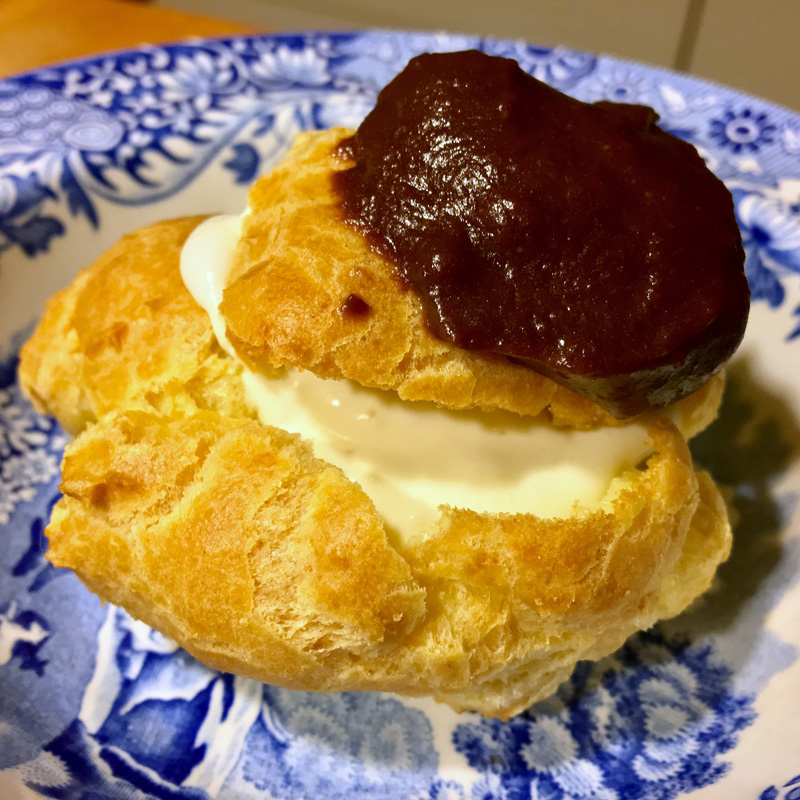 Pound boneless chicken breasts (I have a nifty, heavy, metal mallet) to tenderize, and get pretty thin – like a half-inch or so.

Dredge them in flour with a generous pinch of salt and fresh-ground pepper mixed in, then give them a quick bath in an egg wash, with a splash of milk beaten in.

Have some olive oil with a big chunk of butter heating, till hot, in a saucepan. Throw the egg-washed breasts in and watch them sizzle and turn golden-brown while sipping a Manhattan. That part’s fun. If I have to tell you to turn the breasts over once they’re golden-brown on one side, you should probably just find a restaurant that serves chicken francese.

OK, turn down the heat and transfer the chicken to a plate. Squeeze a lemon into the stuff in the pan and stir for a minute or two, then spoon that ridiculously fabulous sauce over the chicken. 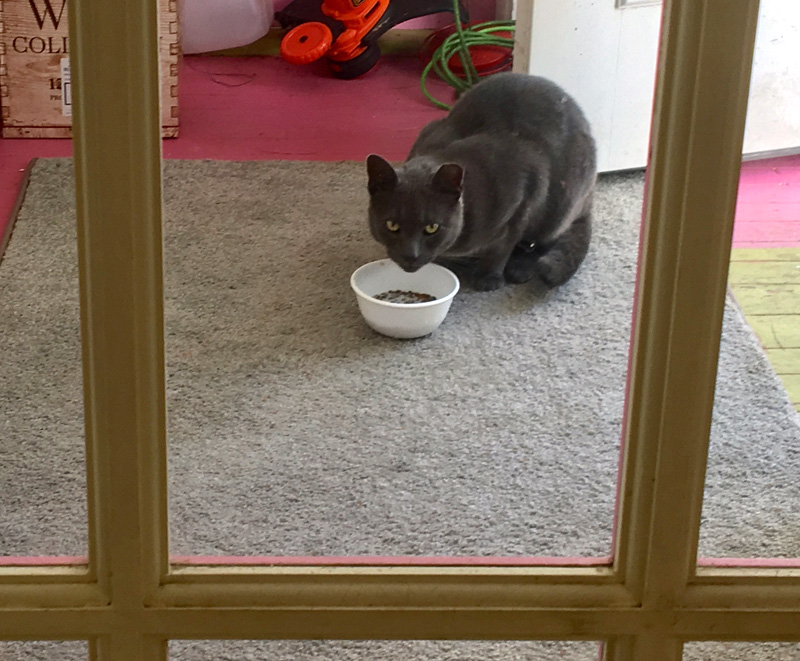 My stray kitty, Bunny, is getting braver by the day. (Suzi Thayer photo)

You can serve whatever you want with chicken francese, obviously. I chose to have some of that totally toothsome cacio e pepe I wrote about a couple weeks ago, and some baby spinach, quickly sauteed in the same pan, with olive oil and garlic.

In case you’re wondering, I had the Manhattan while cooking, and a glass of prosecco in a wicked pretty glass I got in Rome while dining at my antique chess table, watching “Game of Thrones.” Talk about a lesson in diversity!

P.S. I wrote about my friend, Jeff Brown, the limerick writer, a few weeks ago. After he saw that I had revealed his limerick-writing penchant, he came up with one about me:

“Suzi referred to my limericks in her column

And though her words were lighthearted, not solemn

She gave up her source

It was me, but of course

the presses rolled and I couldn’t stall ’em.”

At least this one is fit for a family newspaper.