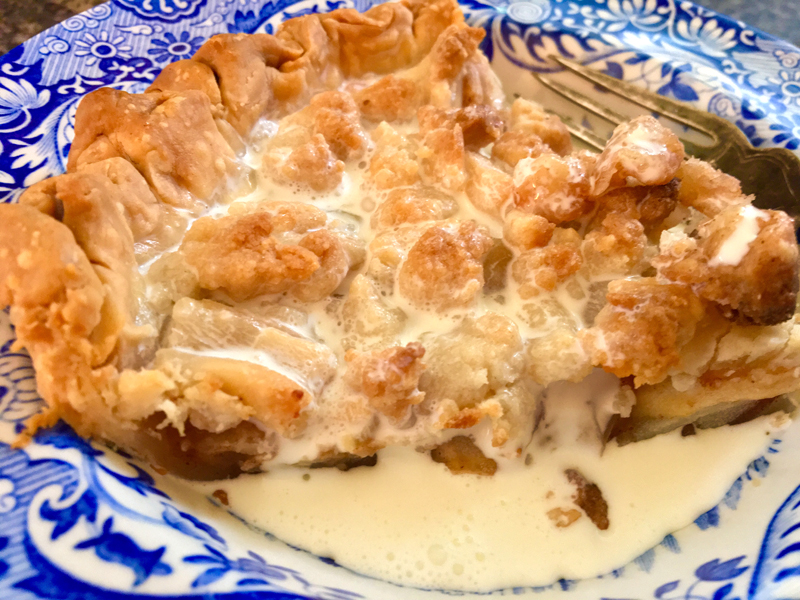 That’s pronounced crisp pie, not crispy, on the off chance you care.

It’s a combination of apple crisp and apple pie. Duh.

In case you haven’t noticed, it’s fall. I don’t know about you, but I never eat apples, or apple pie, in summer. But come fall I crave it. Not so much a plain old apple – apple pie. Or crisp. Apples are good and sweet and crunchy, and wicked healthful. I just don’t eat them.

I usually have a hard time deciding between the two, so the last two times I made apple pie I made it a combo. I forewent the top crust for crisp. It was awesome.

I had kind of a hard time coming up with the word “forewent.” I even Googled it to find out if it was a real word, and I’m still not clear on that. Thankfully, this is a column, not hard news, so I won’t get fired for misuse of the English language. I don’t think. I’m still kind of the new kid on this block. (Editor’s note: Forewent is a word, per Webster’s New World College Dictionary, and the columnist has used it properly. She will not be fired.)

So, apple pie is a fall thing, and on Thanksgiving it’s a tradition in the Thayer household. That, creamed onions, and vodka with cranberry juice. More about that stuff next month. 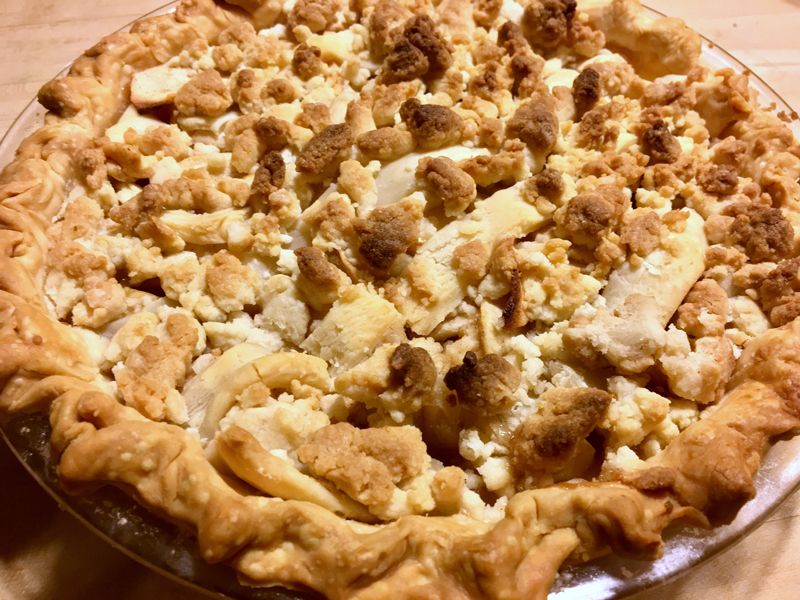 A whole apple crispie hot out of the oven. (Suzi Thayer photo)

Apple pie was my father’s favorite dessert. He liked it with a hunk of cheddar cheese.

Anyway, one day last week my friend Sue Mello told me her daughter, Lizzie, who was home for a visit, was making an apple pie. That was that. Seriously. Mention some awesome food and I’m on it. I started imagining the aroma of an apple pie baking, and then I took a virtual bite, warm out of the oven.

I headed to Hannaford for some apples. I had some Pillsbury crusts in the freezer. In case any of you haven’t gotten it, I’m not a chef. And I’m not a food snob. I don’t settle for many prepackaged, frozen meals, but I’m not above a shortcut, as long as it’s good. Pillsbury pie crusts are good. And they’re a lot easier than making it from scratch.

OK, so I got home with the apples – Cortlands are my fave for pie. I made a Manhattan (it was 5:15) and got the package of pie crusts out of the freezer. OMG. There was only one in the box. Apparently I’d used the other one.

I took a deep breath, and a slug of the Manhattan. 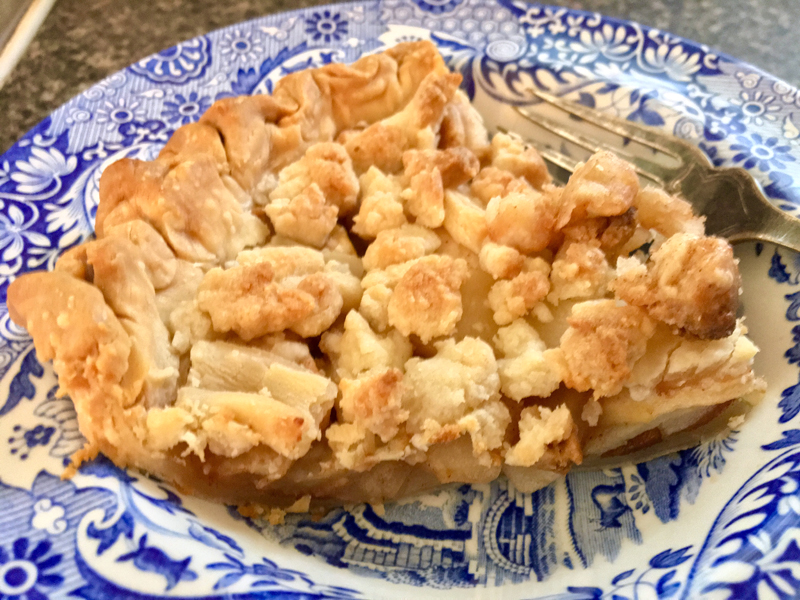 Apple crispie without cream is almost as good as with. (Suzi Thayer photo)

Then I started imagining apple crisp instead of pie. I had flour, butter, and sugar, both white and brown, in the virtual pantry 🙂 I took a virtual bite. It was virtually good.

THEN I remembered last Thanksgiving, when I ran into the same roadblock. One crust left in the freezer. I could have just done what most good cooks would do: make my own. OR I could use the crust on the bottom, and top it with crisp. Hello, apple crispie.

I refuse to make crisp with oatmeal. I refuse to use oatmeal in any dessert. Oatmeal is for health, not dessert. It’s bad enough hot, in a bowl. And don’t even get me started on oatmeal raisin cookies. Neither oatmeal nor raisins belong in a cookie. Ugh.

If you’re mad at me now for dissing oatmeal, try to get over it long enough to try apple crisp without it. Or go ahead and throw some into yours. Just don’t ask me to eat it.

Here’s how I make my apple crispie: Slice up some apples. Cortlands are my apples of choice. Toss them with 1/2 to 3/4 cup sugar, a good teaspoon of cinnamon, a tablespoon of flour, and a healthy pinch of salt. Throw them into a crust-lined pie plate.

Melt a half-stick of butter and stir in 1/2 cup of brown or white sugar, or a combination of both, and a teaspoon of salt. Add 3/4 cup flour. It should be a crumbly mixture with big and little chunks. DO NOT ADD OATMEAL. 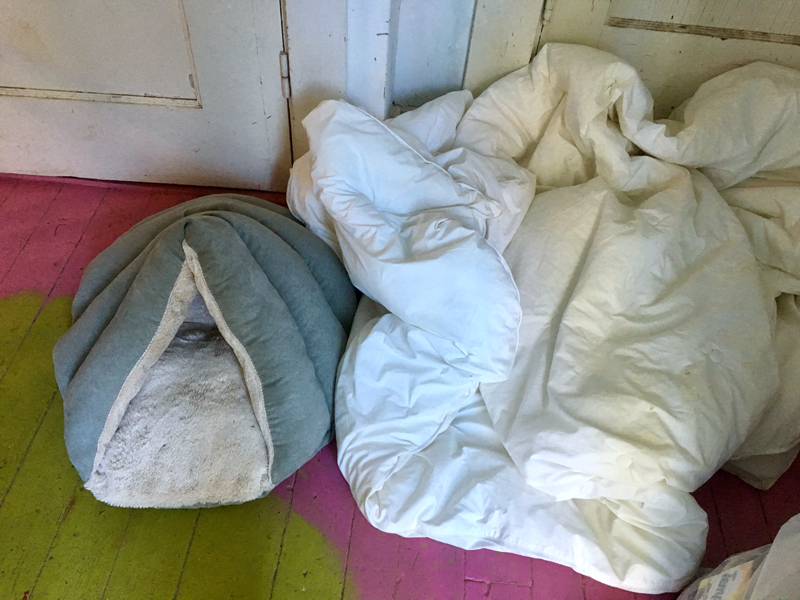 I left this setup in my foyer one cold night, with door open, in case my stray kitty, Bunny, decided to get brave. She didn’t fall for it. (Suzi Thayer photo)

Throw that over the top and bake at 350 for around 40 minutes, until the apples are translucent. You don’t want white apples inside any more than you want oatmeal on top. Or I don’t anyway.

Vanilla ice cream is good with it, of course, but I prefer heavy cream dribbled over it.

And it just occurred to me, the next time I decide to make apple crispie and I find NO crusts in the freezer, I’ll use my favorite one-crust recipe for the bottom crust. That’s the one made right in the pie plate with flour, oil, and milk. Simple and awesome. And I always have all the ingredients on hand, in the virtual pantry and real fridge.

My furnace guy, Blaine Blackman, just left with a piece of the hot apple crispie. I was afraid I was going to need a new furnace, but he fixed it. A couple hundred bucks and a piece o’ pie. And I’m warm.