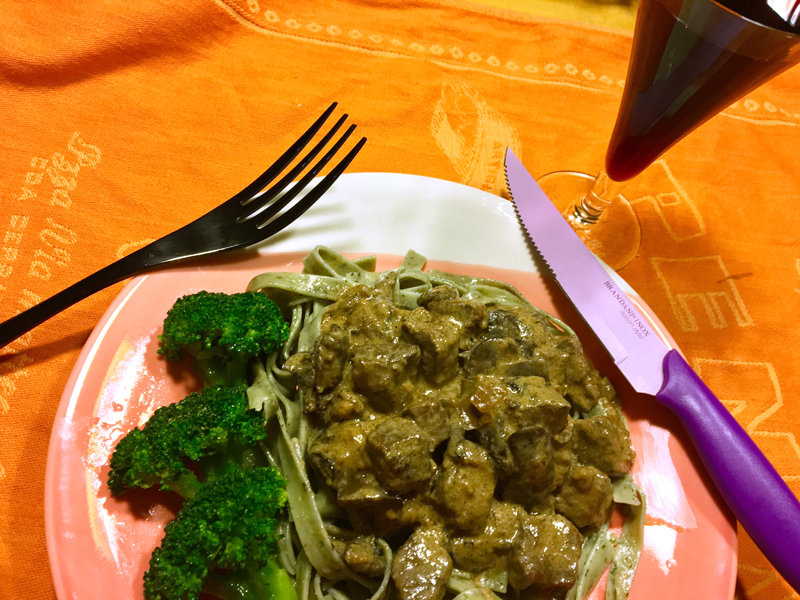 Beef stroganoff may have fallen out of vogue, but it shouldn’t have. (Suzi Thayer photo)

Last week my neighbor gave me a recipe for a steak-and-mushroom ale soup. It sounded like a perfect thing to cook during the expected nor’easter that we were being bombarded with warnings about on the weather stations.

I didn’t believe it. October is way too early for a nor’easter, but I headed to Hannaford for the ingredients just in case. I was all set with bourbon and rye, sweet vermouth and cherries, but was lacking in the food department.

I started looking at cheaper steaks and thinking about something like beef stew, where you can cook the cubed steak for long enough to tenderize it. Then I remembered I had a container of sour cream in the fridge, and stroganoff came to mind.

I didn’t remember the last time I made it, or ate it, but I did remember that the combination of tender chunks of beef, mushrooms, and sour cream, served over some wide egg noodles, was, well, sublime.

Stroganoff was popular back in the ’60s, but it has fallen out of popularity in the years since. I wonder if millennials – the ones who use terms like “btdubs,” have even heard of it. (From what I can gather, millennials were born between 1981 and 1996. Suffice it to say they’re young, relatively speaking.)

I only recently became familiar with the btdubs thing, btdubs 🙂 thanks to my new co-worker, Maia Zewert. She sent a text one day, using it, and I was like, huh? It was used in the context of meaning “BTW” (by the way), so I at least got the drift.

I Googled it. It originated on the internet. It’s a shortened way of saying “bee-tee-double-u” out loud. Of course, it takes longer to type it. Whatever. It’s fun to say and it makes old people appear hip. Or not. 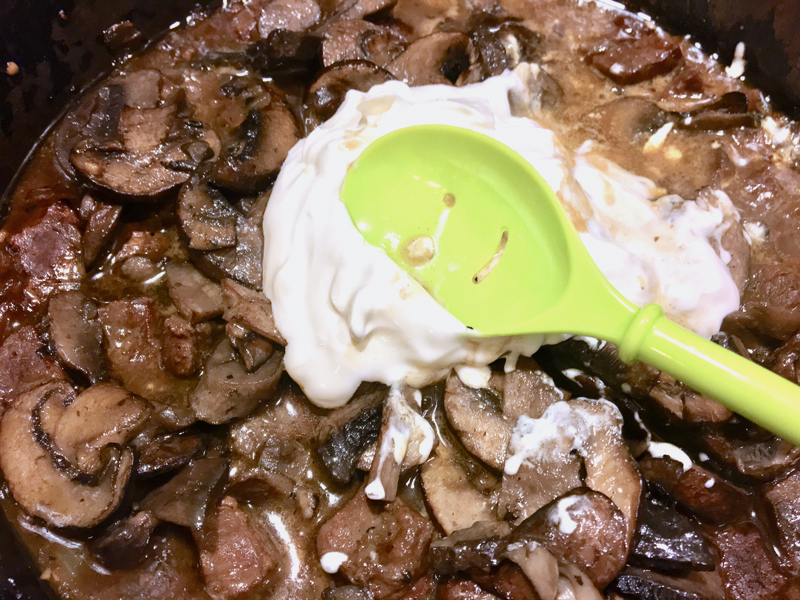 Never use a boring cooking tool when you can use a fun one. (Suzi Thayer photo)

Millennials have a bunch of invented words and phrases that have caught on, among themselves anyway. “Darty” is a daytime party, “yeet” can mean either no or yes (?), “salty” means being in a bad mood, “trolls” are jerks who mouth off to strangers online. I’ve encountered a few of those over this seemingly never-ending political season.

Then there’s “wig snatched.” I like this one. It means putting a person who has spread lies and rumors in his or her place, exposing someone in order to reveal the truth.

Back to beef stroganoff. I made it. It was totally awesome, and I’m hoping it comes back in vogue.

According to a New York Times article by Craig Claiborne in 1963, “the meat-and-cream dish is of Russian provenance, likely named for a noted Russian gourmet, Count Pavel Aleksandrovich Stroganoff …”

The Bon Appetit site declares that it was invented in the early 1800s and “had its American heyday in the 1950s and 1960s, but since then has fallen out of favor (and flavor).”

That theory, however, was based on the REALLY old-time recipe that called for Campbell’s cream of mushroom soup and ground beef. And it offered up a contemporary version, using tenderloin, cognac, and heavy cream.

I’m going to try that one when I’m feeling a little more flush.

Meanwhile, I’ll share the recipe I concocted using a combination of several, which were all very similar.

Get the ingredients en place: cheap or pricey steak – up to you, sour cream, onions, garlic, olive or canola oil, mushrooms (I used portobello), beef stock, butter, salt and pepper (duh), and noodles – typically wide egg noodles. But I found a package of gourmet spinach basil garlic fettuccine in the virtual pantry 🙂 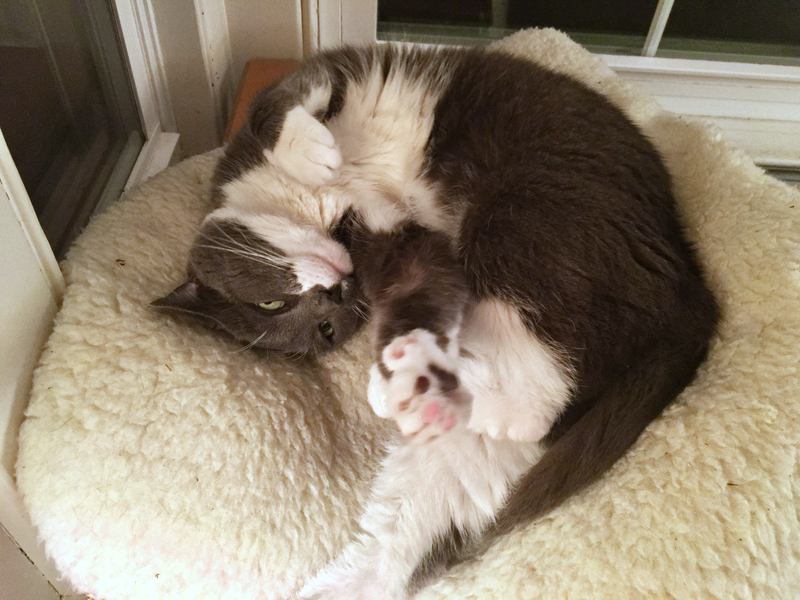 OK. Saute the sliced mushrooms in oil for a few minutes, stirring. Remove from pan and throw in the chopped or crushed garlic and onions (like 1/4 cup chopped onions and a couple tablespoons garlic?) with a little more oil. Cook over medium heat till translucent. Throw that in with the mushrooms. Turn up the heat and throw in cubed steak, as much as you darn well please. Stir around till browned on the outside.

If you made a Manhattan, take a big sip.

Add around a cup beef stock (more if you’re making it for a crew) and simmer on low till tender. It may take a while depending on how cheap the steak was. Mine took a while.

Now stir in the mushrooms etc. and a cup or more of sour cream. That’s all, folks. I was feeling devil-may-care after finishing the Manhattan, so I added a hunk of butter, just to make it a little richer. I also added a few dashes of Worcestershire – something I never use – because a few of the recipes called for it.

Serve over noodles. It was absolutely, totally, ridiculously delicious.

Btdubs, when you make this, and I strongly suggest you do, imagine you’re sitting at an elegantly appointed long table in the czar’s court during the reign of Nicholas II, when your stroganoff may have been prepared by the French chef Cubat.

Of course you’d be drinking vodka instead of Manhattans, and you’d be served by hunky Russian waiters who were selected for their good looks.