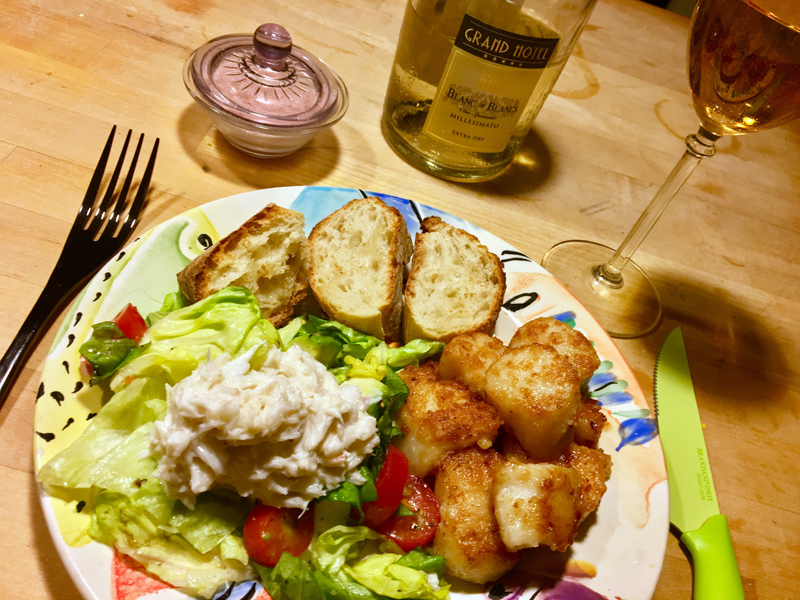 Pan-fried scallops, salad topped off with fresh crabmeat, and crusty bread made for a sublime dinner. (Suzi Thayer photo)

So I’ve been doing a lot of eating over the past week. My sister is up from Fort Myers. She loves food almost as much as I, and eats almost as much. But she’s svelte. Life isn’t fair. Wendy claims she’s not a cook, but that may be a ploy to get me to decide on and prepare all the meals. She gets away with it, though, by doing the cleaning up and washing dishes.

If you’re anything like me, you’ll need to know the details of what we’ve eaten so far. If you’re not like me, bear with and I’ll throw a few amusing little stories into the mix.

OK, so on my way to the airport to pick her up on Friday I stopped at one of my favorite restaurants for breakfast: McDonald’s. I ordered a sausage biscuit and a small coffee (it was delicious). As I was waiting for it, a man walked in and sat down. He was wearing an old coat a couple sizes too big, a wool cap pulled halfway down his face, and red sweatpants – one leg up, one down. On his feet were old, worn socks and sandals. He looked cold.

The girl behind the counter told me he was a regular customer who comes in often for a meager breakfast, sometimes just coffee. I gave her $10 to pay for his breakfast. He was heading to the counter to order as I was leaving. I smiled as I walked back to the car.

After I picked Wendy up, we went to Trader Joe’s in Portland. I love that joint. The prices are good, the produce is fresh, there are always awesome food choices … and cheap wine. I love the new Two Buck Chuck, SHAW. It’s pricey – $3.99. But it’s worth the extra buck (Two Buck Chuck is actually $2.99 everywhere but in California.)

Don’t judge me. I like pricey, or at least semi-pricey, wines too. But to be honest, I’ve been called a cheap date more than once. 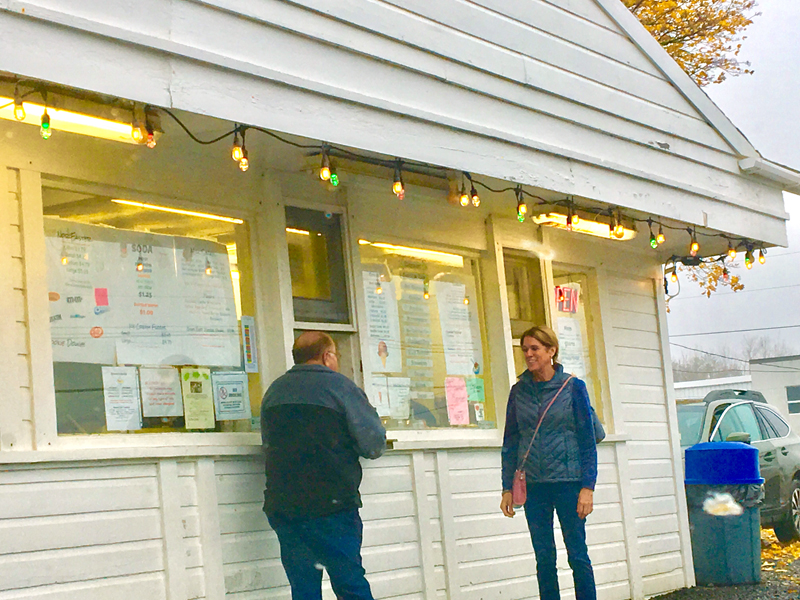 I’m also kind of high maintenance. But the good news? My dog, cat, and stray cat all adore me and gaze at me like I’m gorgeous.

We stocked up on food: crumpets, Unexpected Cheese (if you haven’t tried it, you need to), hard salami, some great looking sourdough bread, salad materials, and plenty of cheap wine, then went to Five Guys. The first two times I went there I didn’t like the food. Maybe it was my mood, or the company. It was positively toothsome that day.

By the time we got back to my house in Edgecomb it was almost cocktail hour. You know what that means at my house: Manhattans.

After cocktail hour we had steamers I’d gotten at Pinkham’s the day before, and some good, crusty bread. Wendy didn’t remember the last time she’d had steamers. She was happy. I was too. We had some prosecco with dinner and apple pie for dessert. It was our father’s favorite dessert.

Needless to say, we did some damage to our waistlines that day.
We made a futile attempt to compensate the next morning by having Great Grains cereal with blueberries for breakfast. Then, unfortunately, we remembered the crumpets we’d gotten at Trader Joe’s. Ugh. Toasted crumpets are riddled with holes that act as vessels for melted butter. Insert trepidatious emoticon. 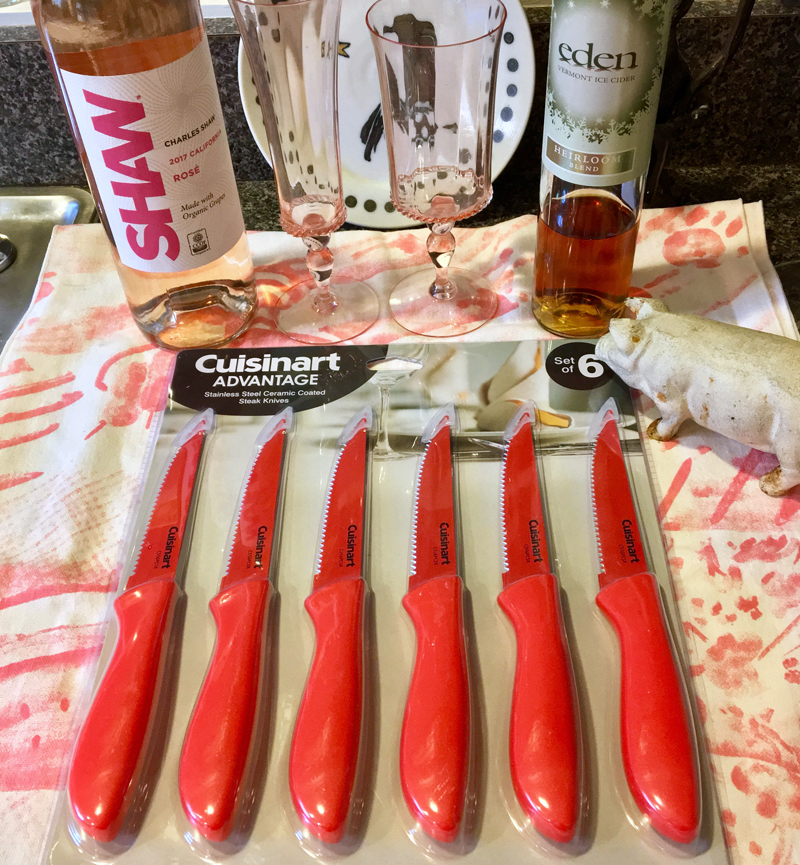 I’m very excited about my new red-orange steak knives, and SHAW wine – a buck more than Two Buck Chuck, but totally worth it 🙂 (Suzi Thayer photo)

So far we hadn’t exactly been health-conscious, and it only got worse as the day wore on. We had decided to go see “A Star Is Born” in Thomaston. It’s a killer. All you men out there? Take note of the way Bradley Cooper gazes at Lady Gaga. If you want to make the object of your affection swoon, try it. Of course, it’s probably more effective with Bradley’s face, but you never know.

We met our cousin, Rich, for lunch at Rockland Cafe. That entailed more not-exactly-healthy food: Reubens and fish cakes. Then we headed to the movie theater. Right across the road from the theater is one of our two favorite ice cream stands, Dorman’s (the other is Shain’s, in Sanford – where we grew up). Dorman’s is usually closed for the season by now, but nooooo – they decided to stay open late this year. Oh man. I had my usual: coffee ice cream with chocolate jimmies. Wendy had ginger.

After the emotionally draining movie, we came home and cheered up over martinis. Variety is the spice of life.

Then we had a dinner fit for a couple queens: pan-fried scallops (they had been frozen, but they came from a diver friend of my aunt Ida’s, and were frozen a few hours after being lifted off the ocean floor). We had a salad with fresh-picked crabmeat, some hot, crusty bread, and some halfway decent white wine too.

I have a lot more to tell you about the food, fun, cheap wine, Manhattans, martinis, cheap wine, and an unforgettable visit with some old friends while my sister was here, so stay tuned for that, and an awesome recipe.