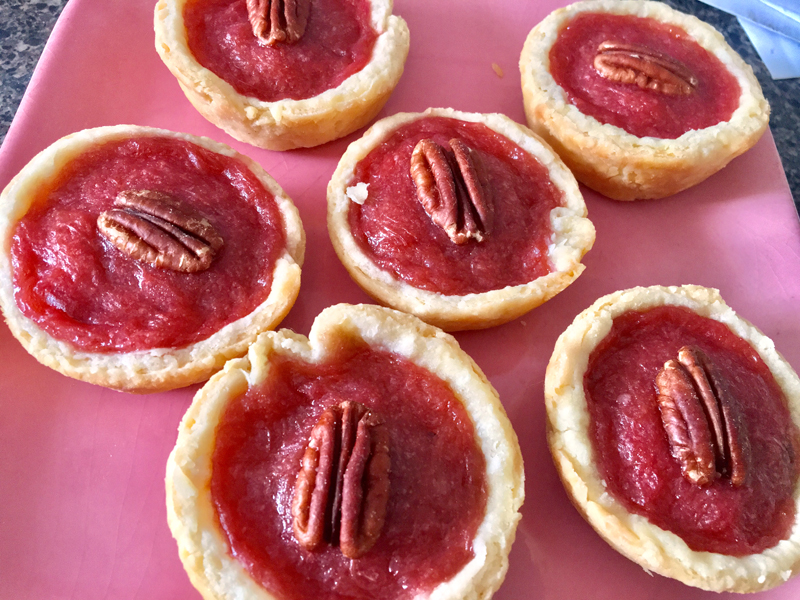 I wrote a story about Weatherbird in Damariscotta a few weeks ago. That place is full of great wines, unique kitchen tools, and awesome gift items.

But the first thing my hungry eyes landed on, just inside the door, was a platter of some fist-sized pastries, with different fruit fillings nestled inside. I pointed to them. “What are they?” I asked the woman behind the counter. “Galettes,” she said. I think I pretended I knew what galettes were, because, after all, I write a food column. 🙂

I went home and Googled them. Merriam-Webster defines a galette as a “flat round cake of pastry often topped with fruit.” Word Hippo defines it thus: “A crepe or pancake made with buckwheat flour, and often with a savory filling.” 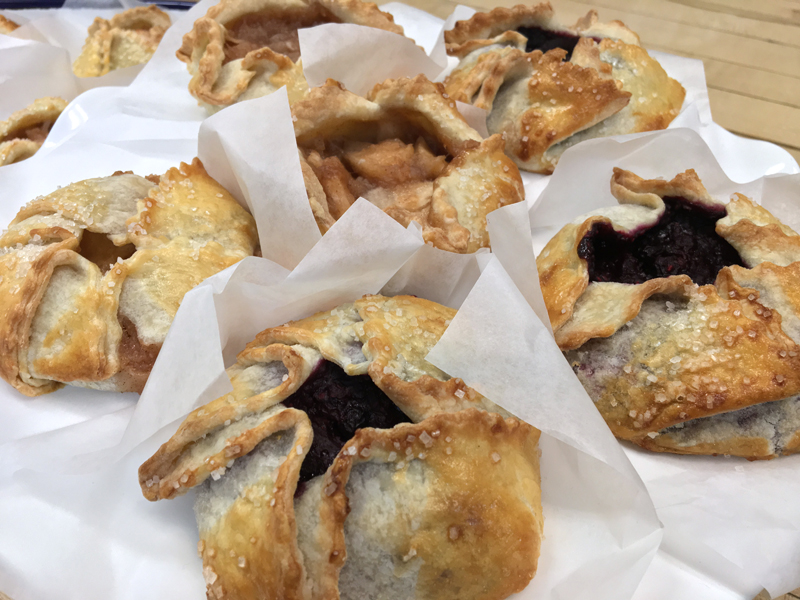 Hmmm. I’ve seen a few photos of galettes since I saw the elegant-looking ones at Weatherbird, and haven’t come across a flat one. Most have the edges folded up around the fruit filling, kind of like a hand holding it.

Anyway, needless to say, I decided to try MY hand at galettes, and in doing so, I invented a new food item: cuppies, pronounced cup-pies. They’re just like cupcakes, only they’re pies.

When I get something in my head, I tend to steamroll ahead, even when I know I should take my time and do it right. The first hurdle I had to leap was the fact that I had no Pillsbury crusts in my freezer and no fresh fruit in the virtual pantry. 🙂

I hadn’t made regular pie crust in around 40 years. (I’m not really 28.) I had to either go out and get Pillsbury pie crust and some kind of fruit, or wing it. 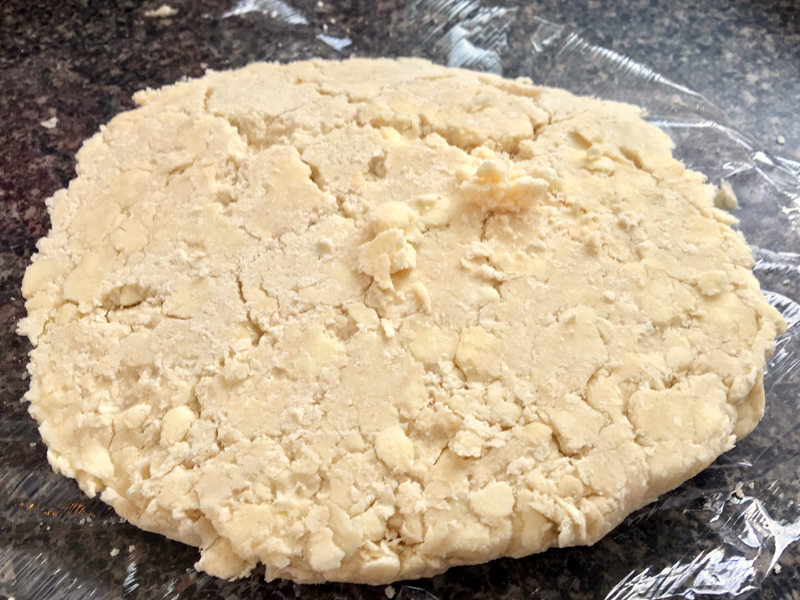 I am a miserable failure at pie crust. Luckily it came out much better than it looked. (Suzi Thayer photo)

Then I remembered that I’d cut up some rhubarb and frozen it in August. I decided to forgo the store and MAKE MY OWN PIE CRUST.

I found around 25 recipes, and there was little variation: flour, butter, salt, and ice water. Simple. Here’s the one I used:

Mix a teaspoon salt into 2 1/2 cups all-purpose flour. Cut up 2 sticks cold butter. (Why do recipes all call for unsalted? I use salted.) I cut it into small pieces and incorporated into the flour with a pastry blender. Wendy had just brought me our mother’s old pastry blender, in an old, small wood bowl. Perfect timing.

When the flour mixture looks like a course cornmeal, throw in 4 tbsp ice water and start blending with hands until it comes together. The recipe says: “If dough is still crumbly, add more ice water a tablespoon at a time (up to 4 more tablespoons). Don’t overwork it!” 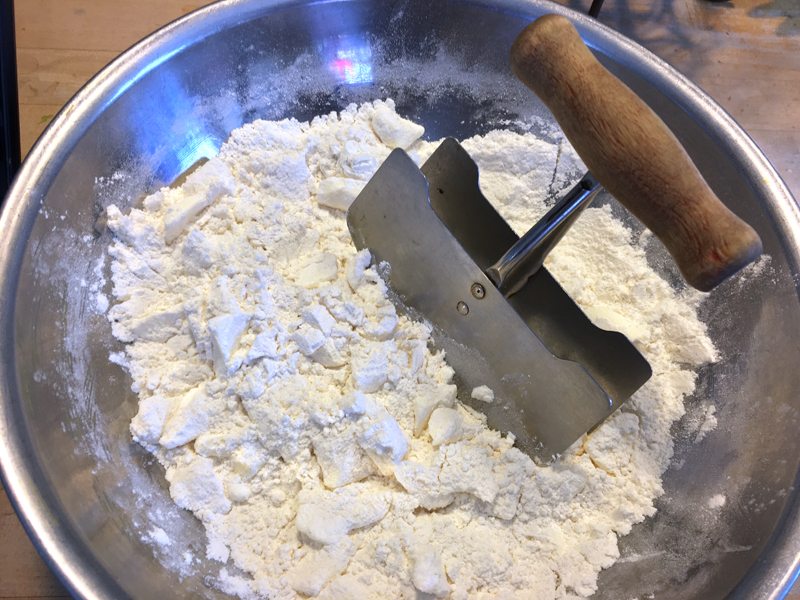 Right. I remembered why I started buying Pillsbury crusts. The crust did not “come together.” I kept adding teaspoons of ice water. After four more, I gave up and did my best to press it together and wrap it in plastic wrap to stick in the fridge for an hour.

Meanwhile I cooked the rhubarb with sugar and some cornstarch, and a pinch of salt. It made a nice, thick sauce.

I somehow managed to roll the crumbly crust out and cut a bunch of big rounds. I tried to build one pretty free-form galette. It was a miserable failure.

So I did what any practical miserable-failure-of-a-cook would do. I improvised. Isn’t that how many great inventions come to fruition?

I invented the cup-pie: I gently pressed the rounds of dough into a cupcake tin. Perfect fit! Then I had another brainstorm. I had gotten some gingersnaps at Trader Joe’s. Have you ever had them? I make gingersnaps that are out of this world, and Trader Joe’s gingersnaps are a very close match. 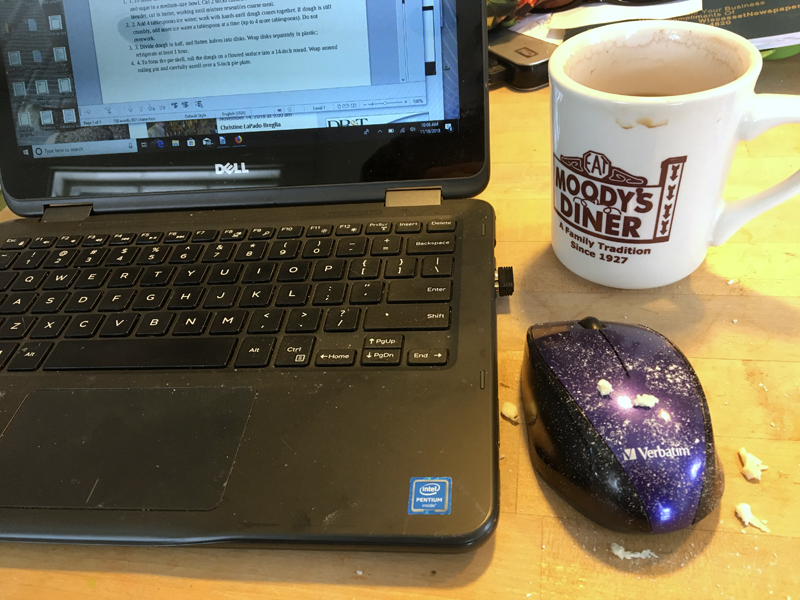 One of the drawbacks of writing a story while cooking the subject of it is a messy mouse. (Suzi Thayer photo)

They’re little – the same size as the bottom of the cup-pie bottom. I put a gob of rhubarb on one and popped it into my mouth. Eureka! It was a sublime combo of flavors. So I made my cup-pies: flaky crust that came out surprisingly delectable, a little gingersnap, and a big gob of rhubarb sauce.

They were wicked cute, but I pictured them with something artful and toothsome to top them off. Pecans! I had also gotten a bag of whole pecans at Trader Joe’s (I love that joint). I placed a pecan in the middle of each cup-pie and baked them for around 1/2 hour at 350.

If you decide to tackle cup-pies, or galettes, I’d advise you to use Pillsbury crust, unless you’re a great pie-maker, or a masochist. Better yet – just go over to Weatherbird in Damariscotta and buy a galette, made each morning by owner-baker Scott Devlin. 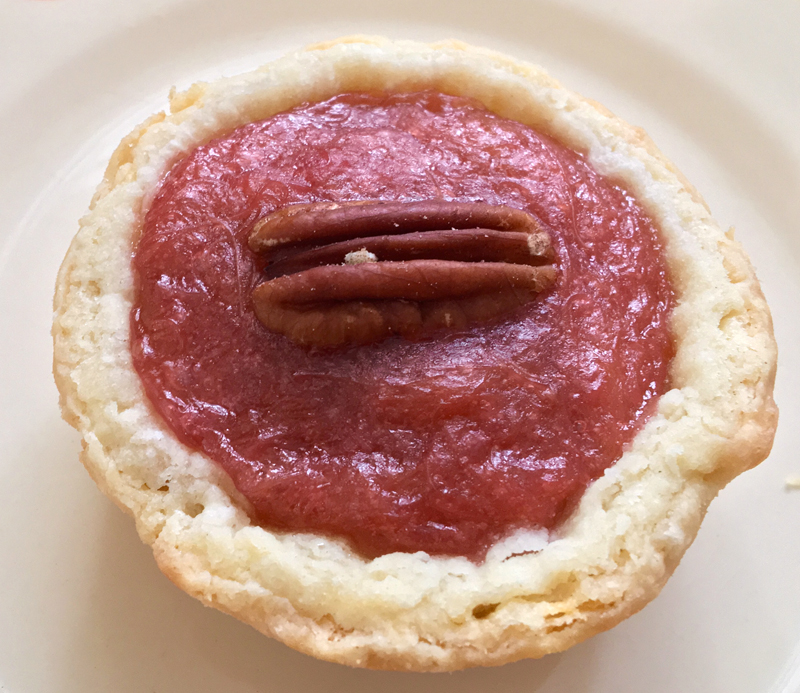 He started making them in June, and well over a thousand have been sold so far. “It’s a great alternative to buying a whole pie, or a slice, because you can hold a galette in your hand,” he said. “It’s mobile.”

Scott makes his own crust and it’s, like, perfect. There are different fillings every day. The latest? Lemon curd. Just go get one. Or six.