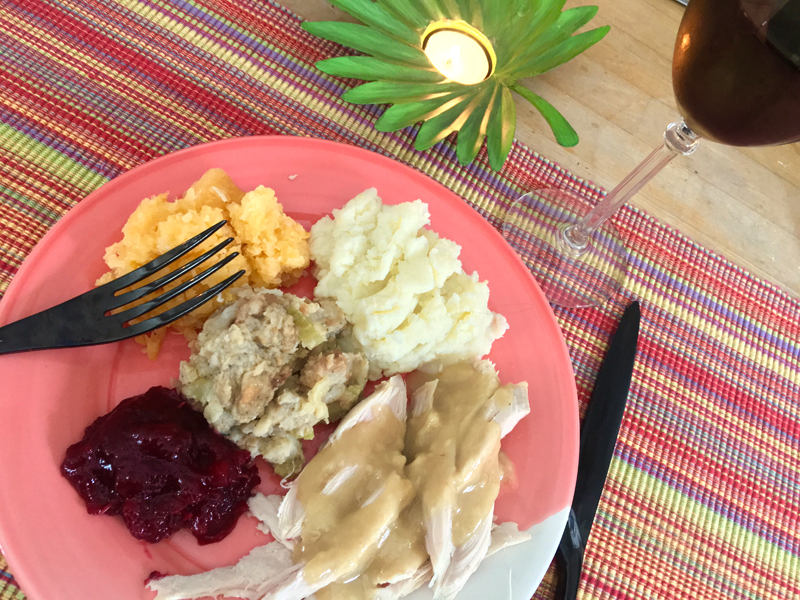 A Thanksgiving dinner for one. No Debbie Downers here. (Suzi Thayer photo)

Thanksgiving has come and gone. Not to be a Debbie Downer, but lately I’m not a big fan of the holiday season. After Thanksgiving I think, “OK, one down, one to go.”

That said, if you were at the dinner table on either Thanksgiving or Christmas, you’d never guess I was a Negative Nelly. That’s because I love good food. I love my family and friends too, and usually the holiday dinners include all of the above.

My family Thanksgiving came early this year because my sister, Wendy, was up from Fort Myers in early November, and she hadn’t been in Maine, other than during the summer, in around 10 years. We had a faux Thanksgiving on Nov. 10.

In case anyone’s interested, Wendy was named for Wendy Darling in Peter Pan. And I have a brother named Peter. Mum loved Peter Pan. My real name is Tinker Bell Thayer. 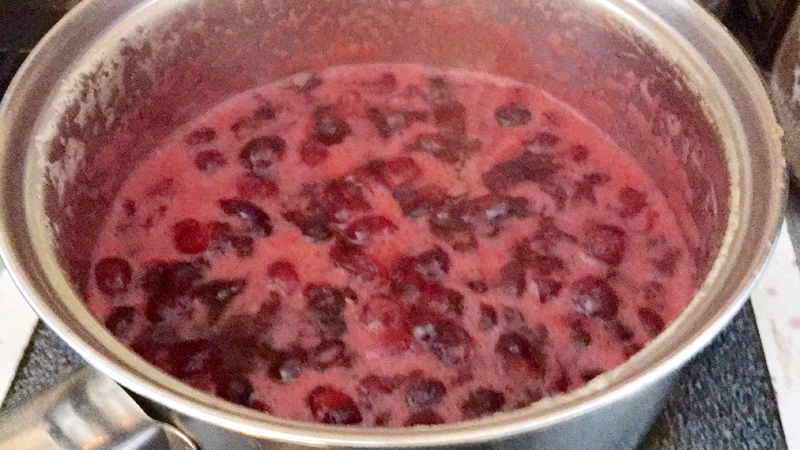 Cranberry sauce bubbled away on the stove while the turkey cooked below. (Suzi Thayer photo)

Around 10 of us attended the make-believe Thanksgiving dinner at my aunt Ida and uncle Gary’s house in Thomaston. It was all relatives but for a family friend, Sam Olson, from Cushing.

(This is beginning to sound like a real small-town column.) 🙂

So there was a plethora of wicked good food at that gathering: the requisite turkey, stuffing, squash, sweet potatoes au gratin, roasted Brussels sprouts, mashed potatoes, and gravy. There was cranberry sauce – both fresh and canned.

Then there was Wendy’s famous green bean casserole. I’ve told you Wendy’s not a cook, right? Well, you’d never know it if you tasted this. She uses fresh green beans and makes HOMEMADE cream of mushroom soup, with portabella mushrooms. 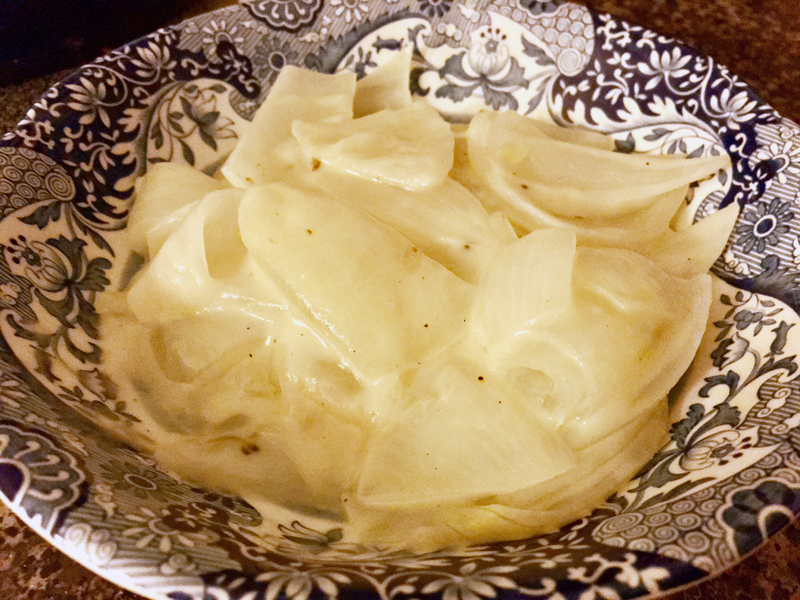 But you WOULD know she’s not a cook if she prepared this in your kitchen. OMG. She follows recipes right down to the 16th of a teaspoon. It took her, like, three hours. It’s unbelievable. Luckily, it’s awesome.

Plus she cleans up after herself, and me. I’m a messy cook.

I made creamed onions. They’re a staple in Thayer family holiday meals, and they’re sublime, and simple: cut Vidalia onions up into big chunks, boil in like 1/2 inch water for around 12 minutes, throw in a hunk of butter, and stir in some cream and salt. I used to throw in a teaspoon of sugar, but Vidalias are so sweet you don’t need any.

We had pumpkin, apple, and chocolate cream pies for dessert. Then we all went home and laid on our respective couches, moaning and groaning that we ate too much. 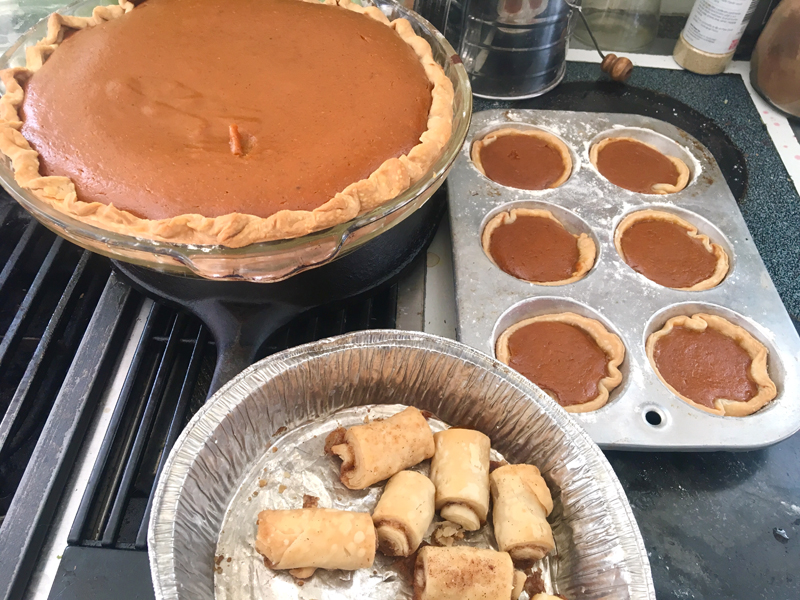 A pumpkin pie and some of its offspring: pumpkin cuppies and cinnamon rolls. (Suzi Thayer photo)

That was the family Thanksgiving. On the actual day I went to Sue Mello and Jon Lewis’ house in Boothbay for Friendsgiving. The notorious limerick writer, Jeff Brown, was there too. No doubt he’s come up with a few since Thanksgiving, about the day. If he has, and they’re fit to print in a family newspaper, I’ll share them with you. But don’t hold your breath.

Anyway, I can’t take up too much space in the LCN, so suffice it to say that the food was awesome, as it always is in that household.

Just before Thanksgiving I sent emails to some of the staff at LCN, asking them to share recipes for their fave Thanksgiving dish. I got some great responses and some awesome recipes, but I’m running short on time and long on words for this week, so I’ll share them next week. Christmas is coming and they are all apropos for that meal too. 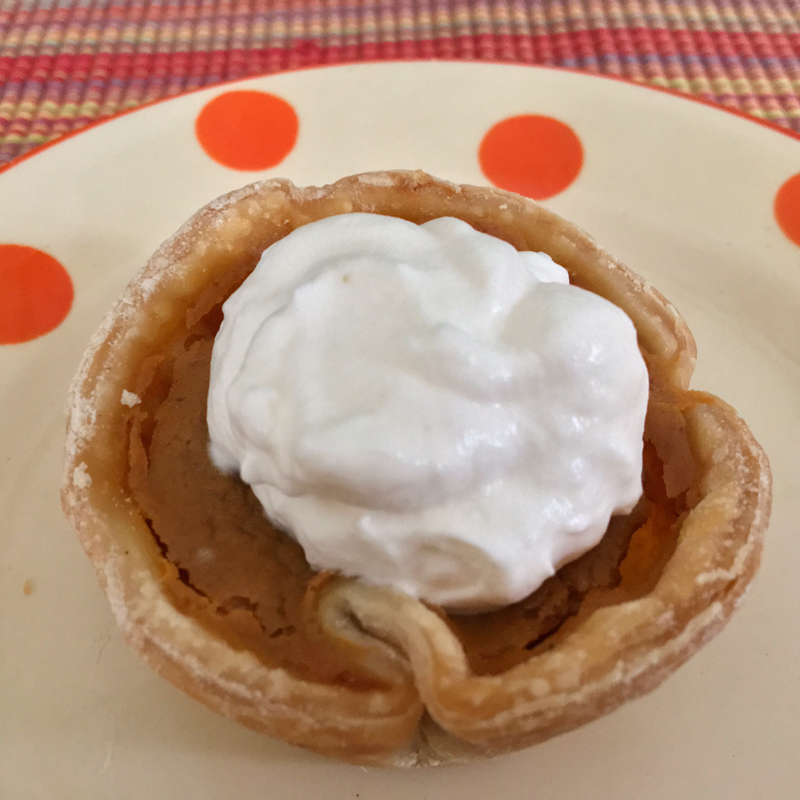 As I write this, on Nov. 25, I have my own turkey in the oven and cranberry sauce bubbling on the stove. (Turkeys are cheap after Thanksgiving, and I need leftovers.)

At 5 p.m. I’ll mix up a Manhattan and sip it while I carve the turkey and prepare a plateful with mashed potatoes, turnip, creamed onions, and, of course, stuffing and gravy. And for dessert I have some pumpkin cuppies with maple sugar whipped cream.

I’ll be anything but a Negative Nelly or a Debbie Downer while I enjoy my third Thanksgiving meal. And I’ll raise my glass to my mother. It’s our first holiday season without her. We miss her like crazy, but she’d say, “Oh well, life goes on.”

It does, but it’s not the same.