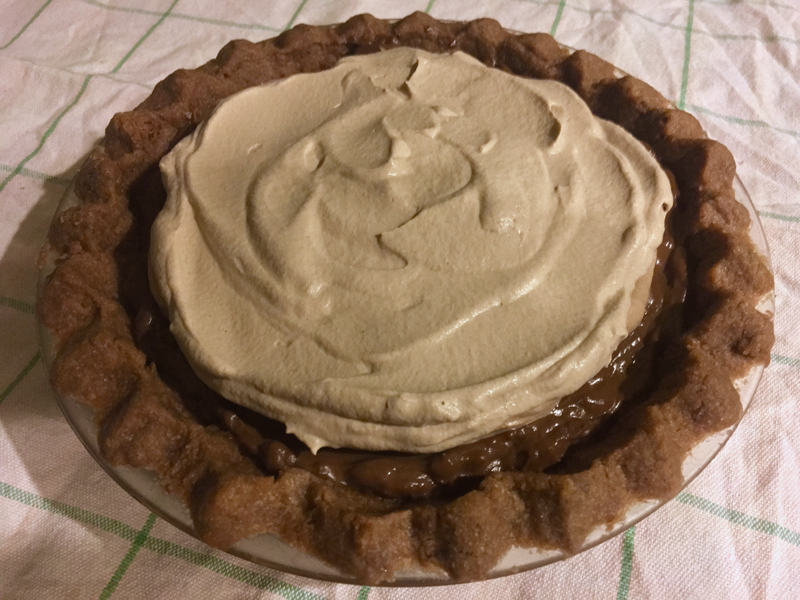 The holidays are upon us, and as trying as they can be at times, the thing I love most about the season is the awesome, mostly unhealthy food that’s everywhere you look.

I have nothing against healthy food, but one thing I don’t want to be served at a holiday meal is something that’s simply healthy for the sake of being healthy. Give me vegetables, but not plain, steamed vegetables. I want them roasted with butter, or olive oil and garlic. I want them to be golden brown and crunchy in places, and sweet, with a bite, on the inside.

Whatever you do, do not boil my vegetables. I’ll eat them to be polite, but I won’t like them. 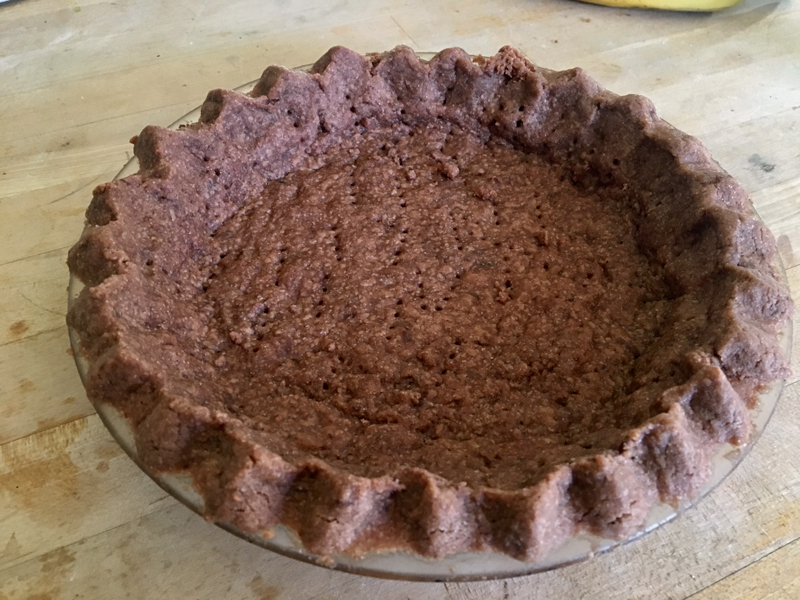 Chocolate shortbread crust is a breeze to make, believe it or not. (Suzi Thayer photo)

I used to use Jell-O pudding – the kind you cook – for my choco cream pies, but every time I attempted to make it over the last few years, it was a sloppy mess. It did thicken, but when I set it aside to cool, it un-thickened. Thin, sloppy pudding a pie does not make.

I now use a recipe I found on the Epicurious website for “New-Style Old-Fashioned Chocolate Pudding.” It’s a breeze, and you can eat the resulting pie with a fork, instead of a soup spoon.

The chocolate cream pie I’m going to make this year for Christmas will have a chocolate crust and chocolate whipped cream. It will not be healthy, and it will be fattening. But it will be sublime.

Of course, I had to make one for the sake of the photos for this column, too. Hopefully I can find some friends to share it with, because I can’t share it with my little dog, Elliot; my kitty, Ruby-2-Shoes; or Elliot’s girlfriend (don’t tell Ruby) Bunny, the not-so-stray cat in the heated room out back.

For any of you who have been following the love story of Elliot and Bunny, I’m happy to report that Bunny is officially spoiled, and is right now curled up on a down comforter, on her very own bed, beside an oil/electric radiator. I’m toying with the idea of a book. I’ll need to sell a few thousand to help pay for her food (she eats twice as much as Ruby) and the two heaters out there. At least she allows me to scratch her back now. 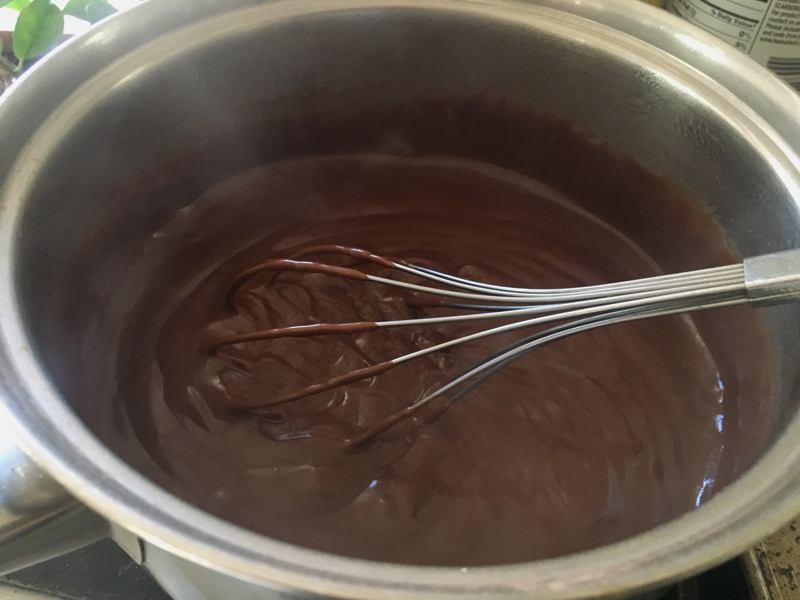 Don’t bother to use a packaged chocolate pudding mix. This homemade one is simple and so much better. (Suzi Thayer photo)

The crust: This is a simple, melt-in-your-mouth, crumbly, shortcake-like crust that I’ve shared the recipe for before, but it bears repeating. The recipe came from Barbara Stimpson, from England. She married a lobsterman, Roland Stimpson, from Cushing.

Lucky lobsterman and lucky us – the people who got to enjoy her pies at Our Place, a little restaurant owned by another lobsterman, John Olson, down on his wharf in Cushing. I was a waitress there when I was a skinny, knock-kneed teenager. Unfortunately Our Place is long gone, but thankfully, Barbara’s pie crust lives on.

And I’m not knock-kneed, or skinny, anymore.

Here’s the recipe: blend 1 1/2 cup flour, 1/2 tsp salt, and 3 tsp sugar with a fork, right in the pie plate. In a separate dish, blend 1/2 cup canola or vegetable oil and 2 tbsp milk, with the same fork. Pour that into the flour mixture and mix with – you guessed it – the fork. Press out to edges, flute prettily, and poke the crust full of holes with a (the) fork. Bake for 10 minutes at 400.

In case you haven’t noticed, you’ll only need one fork to make this crust. 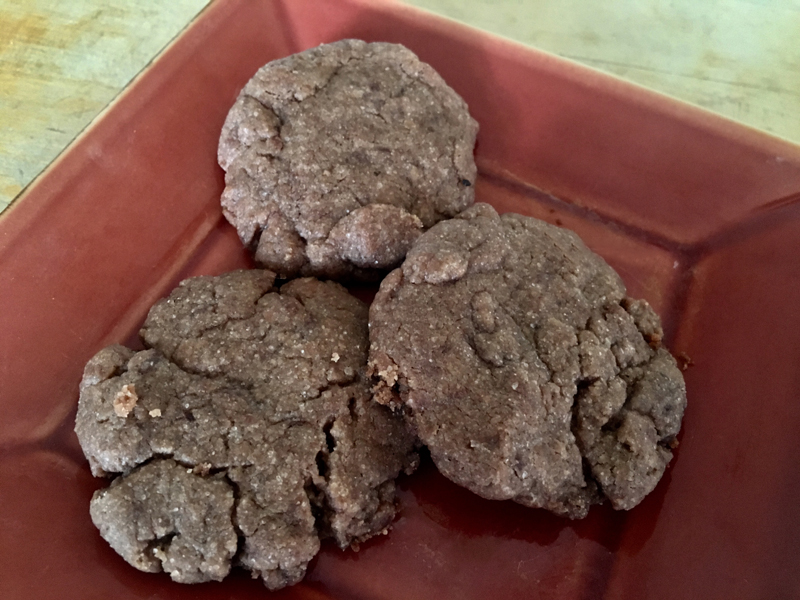 I made some chocolate shortbread cookies with the leftover dough. They were pretty awesome too. (Suzi Thayer photo)

For the pudding: mix 1/2 cup sugar, 1/3 cup unsweetened cocoa powder, 3 tbsp cornstarch (packed), 1 tsp flour, and a good pinch of salt in a saucepan. Add a cup whole milk and whisk all together, then add another cup milk. Stir over medium heat for around five minutes, until thickened and beginning to simmer, then continue stirring while it simmers for a minute. Remove from heat. Stir in a teaspoon butter and a teaspoon vanilla extract. It’s always a good idea to lay some waxed paper right on the surface to prevent a skin from forming.

When both the crust and pudding have cooled, pour the pudding into the crust (duh), and whip up some heavy cream, with a couple teaspoons of sweetened cocoa or choco syrup. Throw in a teaspoon of vanilla too. Pile that on top of the pie, and be prepared. It’s totally ridiculous.