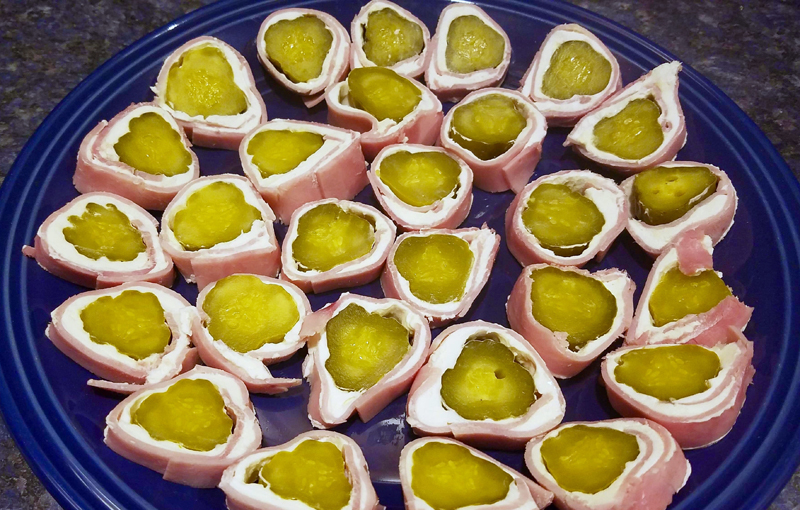 Just before Thanksgiving I asked several co-workers at The Lincoln County News what their favorite holiday recipes were. I got a plethora of responses and some great ideas, both sweet and savory, for your holiday meals or parties.

Most of the following dishes were geared toward their Thanksgiving meals, but I think all could work for Christmas too.

Paula Roberts makes a very unusual pie. She said that what is now a tradition was the result of a faux pas: the raspberry pie that was baking on a rack above the pumpkin pie overflowed one year. The result: pumpkin pie with raspberry topping.

“Everyone loved the combo so I’ve had to make it every year since,” she said. “Just bake the pumpkin pie halfway, then put raspberry pie filling (homemade of course) on top and finish baking.”

She makes her famous holiday oatmeal rolls too, and potato candies (needhams) that her husband’s family calls black and whites. And husband Chris makes “homemade fluffy peanut brittle that melts in your mouth.”

Kathy Lizotte makes dill pickle ham cream cheese rolls. “You cover a piece of ham with cream cheese and put a dill pickle on it and roll it up and cut it in slices,” she said. “It’s easier when you dry the ham with a paper towel – the cream cheese spreads easier.”

Simple, and sounds wicked good to me. She said her mom makes something similar with ham, cream cheese and horseradish, and asparagus. “That’s a good one too!”

I have ham, cream cheese, and dill pickles on my grocery list. 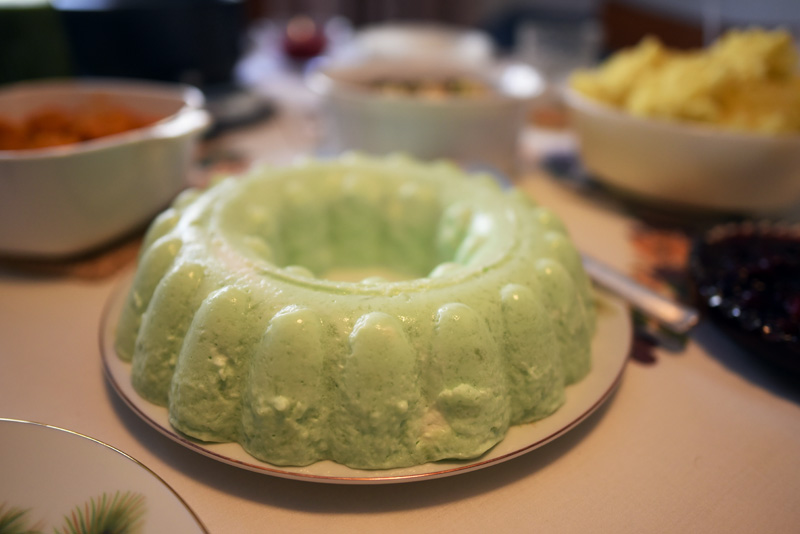 Sarah Caton makes a decadent version of a chocolate pie that calls for a graham cracker crust, marshmallows, milk chocolate morsels, hot fudge topping, and Cool Whip. Hello. She said the recipe is right on the Keebler pie crust packaging. Oh, and if that isn’t enough sweet decadence, she usually drizzles some Baileys Irish Cream and grates some milk chocolate over the top. “It’s amazing and my family loves it,” she said.

Jessica Picard said her grandmother makes a fluffy dream of a dish called pear seafoam salad for Thanksgiving. I don’t know why it wouldn’t be awesome for Christmas too. It’s made with lime Jell-O, pears, cream cheese, and whipping cream, and poured into a mold. “It’s light and fluffy, with a pretty seafoam green color,” she said. You’ll need lime Jell-O, a large can of pears, cream cheese, and whipping cream. You can email me for the recipe. I’ll forward to Jessica.

I’m going to have to make this one too.

Jill Rice said her favorite holiday tradition is being with her family, “but almost as important is the pie – pumpkin chiffon pie.” The recipe goes back to Mamie Eisenhower, and Jill said it’s pretty easy and “oh so delicious – light and fluffy.” She got the recipe from her mother-in-law many years ago, and it has won over her family. Again – if you’d like the recipe, email me and I’ll forward your email to Jill. 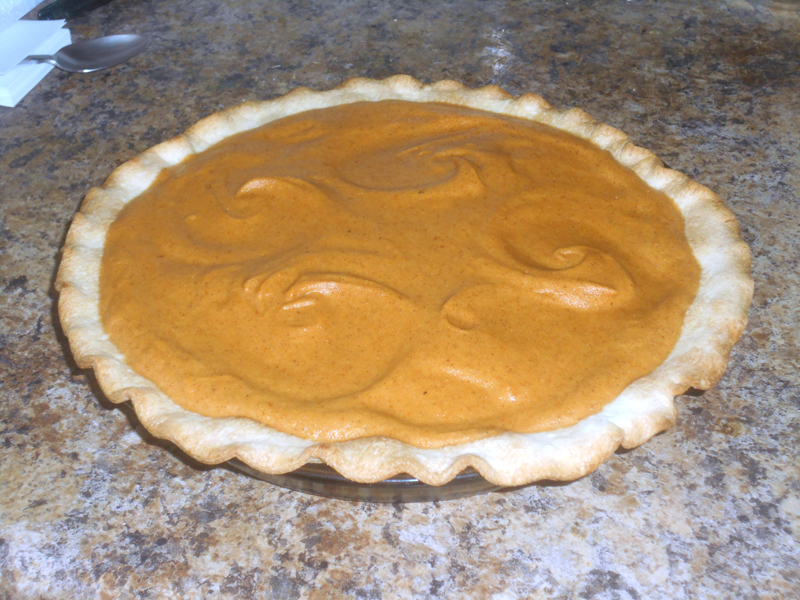 Jen Touchette makes Crock-Pot creamed corn. Who’d a thunk creamed corn could come from anything other than a can? It sounds positively delicious, and creamy, with butter, cream cheese, and cream. She’ll happily share the recipe.

Amber Clark, from West Virginia, said her family always has a traditional West Virginia pepperoni roll during the holidays. It’s basically a dinner roll with pepperoni (and often cheese) wrapped up inside.

“The dish was invented by an Italian immigrant and former coal miner, Giuseppe ‘Joseph’ Argiro, who lived and worked in West Virginia in the early 1900s,” Amber said. “He knew the miners needed a snack to take to work with them that was easy to transport and didn’t need to be refrigerated or heated. And the pepperoni roll was born.” 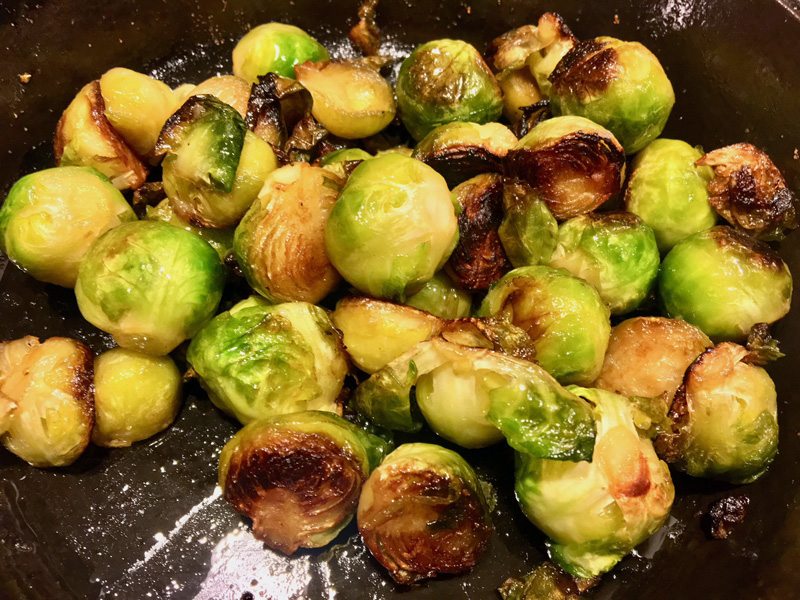 One of my favorite veggies, for holidays or whenever: pan-roasted Brussels sprouts. (Suzi Thayer photo)

Because it was just before Thanksgiving when I asked the LCN-ers for recipes, Maia Zewert, from Iowa, shared her Thanksgiving story:

“Since it’s challenging for me to get home to Iowa for the holiday, my Maine Thanksgiving tradition has been turkey tacos with all the fixin’s.” She said it started on her first Thanksgiving in Maine, when her friends Sam and Dom adopted her for the holiday. “It has quickly become one of my favorite traditions.” This year she took her friend and co-worker, “fellow holiday castaway” Jessica Clifford, to Portland for the turkey taco Thanksgiving.

Jessica was a little sad that she wouldn’t be going home for Thanksgiving with her family, but I have a feeling Maia took good care of her. “My mom makes us green bean casserole every year, which is really funny because in my big family of three other siblings, only my mom, dad, and I would eat it,” she said.

All in all, I get the feeling my co-workers (who I don’t spend enough time with because I do my writing from home in Edgecomb) had some great food on Thanksgiving, and will have more on Christmas. 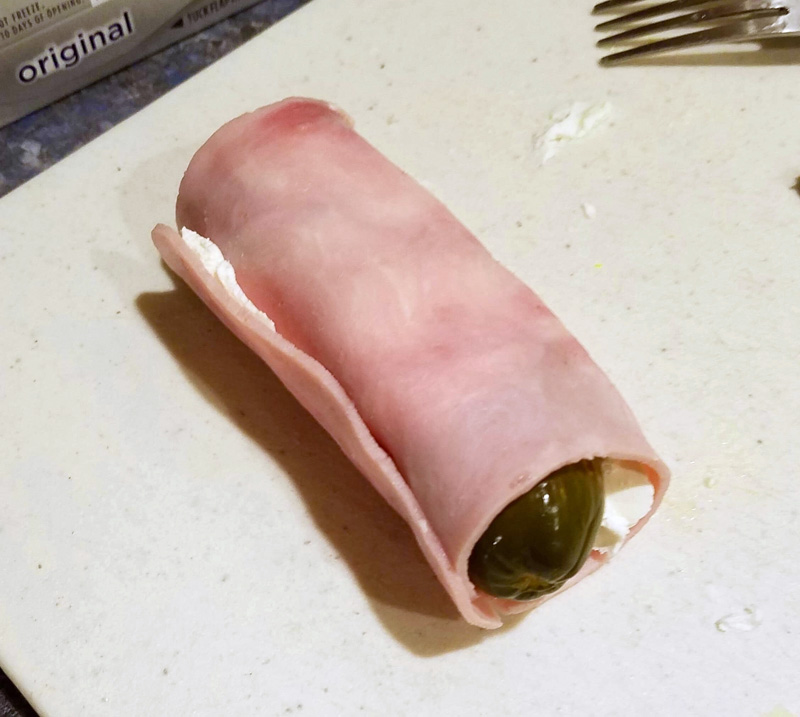 Happy holidays to all you Lincoln County revelers.