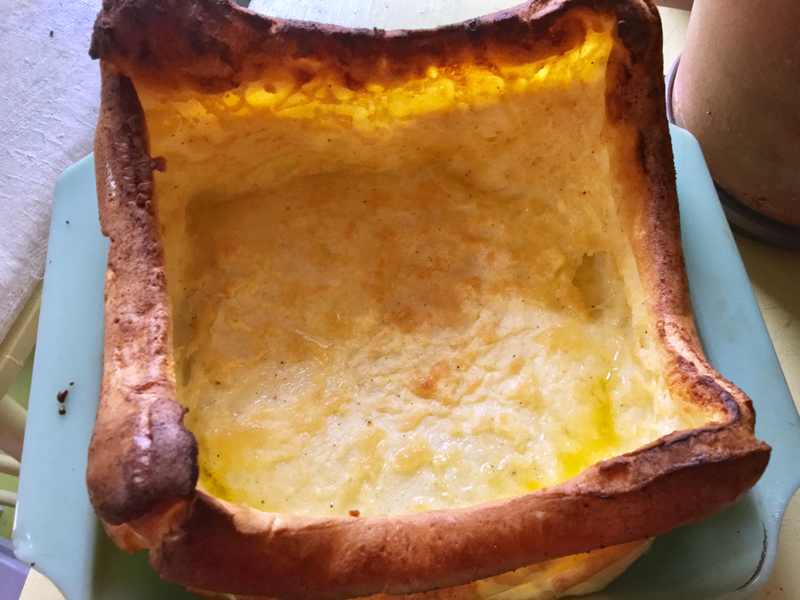 Swedish (or German) pancakes, more like Yorkshire pudding than pancakes, are baked in a pan and cut into pieces. Big pieces. (Suzi Thayer photo)

The holidays are over, but there’s still time to eat fattening, unhealthy, delicious food without guilt. You can start feeling guilty next week. Or next month. Meanwhile, make yourselves a fattening, delectable breakfast: Swedish pancakes.

I Googled them and found that most of the recipes for Swedish pancakes are similar to traditional pancakes, but more like crepes – thinner and more eggy.

And it appears that what my mother called Swedish pancakes were actually German pancakes. I don’t have a clue why she changed the name, but knowing Mum, there’s probably a funny story behind it. She had a German boyfriend for a while, and I have a feeling the name change originated during an evening with him, after a couple martinis.

Whatever the real name of this buttery, puffy, golden-brown dish, it will always be Swedish pancakes to me and my siblings. I texted Wendy and told her, “No one else calls them that, but that’s what Mum called them, and that’s what they are!” She replied, “Correct! And I have her recipe to prove it! It says Swedish pancakes right on it.” I love my sister.

I’m not sure why the dish is called pancakes, as it bears little resemblance to traditional, round pancakes. They’re baked in a pan, like a cake, and cut into squares or pie shapes. 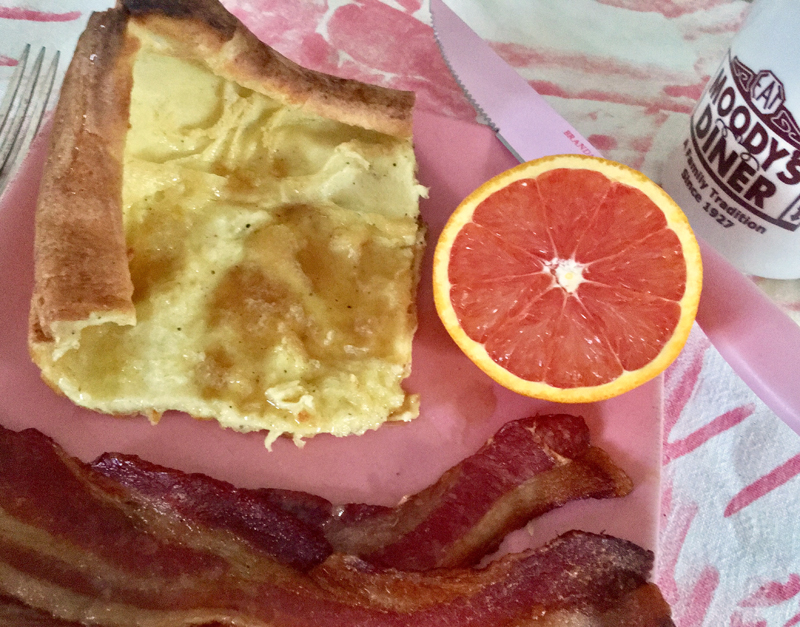 Swedish pancakes with butter (more butter) and maple syrup, served with bacon and an orange (to make it healthy). 🙂 (Suzi Thayer photo)

Swedish pancakes are essentially a sweet version of the savory Yorkshire pudding, but they’re served for breakfast, or brunch, with butter and syrup or preserves, rather than dinner, with a roast beef.

Long before I had ever heard of Yorkshire pudding, my mother was serving her four kids Swedish (or German – whatever) pancakes on Sunday mornings.

The first time I was served Yorkshire pudding was on a sailboat in the middle of the ocean. It was a chilly, rainy day and I, with the rest of the crew of six, was somewhere near the Bermuda Triangle on a 60-foot ketch.

It was the first of three voyages from Boothbay to the Caribbean that I managed to somehow survive. We had left East Boothbay in early November to head to Saint Thomas.

The captain, a world-class sailor from England with a lot of similarities to Captain Bligh, was possibly the reason I’m here today, writing about Yorkshire pudding and Swedish pancakes. He got us through some pretty scary weather conditions, including a hurricane that snuck up on us shortly after heaving ho from City Island in New York.

The sailboat was the Symfoni, built for the king of Sweden (speaking of Swedish pancakes :-)) around 1930. The cook on that trip was English too, and she knew her way around a galley.

There I go again. ADD. I’ll tell you more about that, complete with details about the Yorkshire pudding that cook served us, next week. 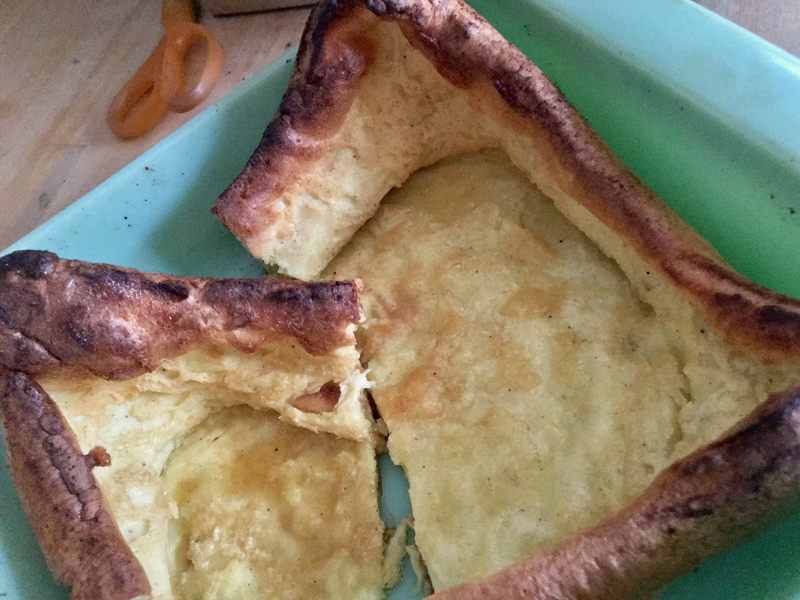 If you’re not careful, or if you’re feeling devil-may-care, you might find yourself polishing off the whole thing. (Suzi Thayer photo)

So Swedish pancakes might be the most elegant breakfast you’ll ever have. They’re gorgeous, puffed-up mounds of golden-brown deliciousness. Served with a side of some perfectly baked bacon and a cup of hot, fresh-brewed coffee made with freshly ground coffee beans in a brand-new French press coffee maker like the one my brother, Peter, gave me for Christmas, they make for a breakfast you won’t soon forget.

Plus it’s simple and quick.

Here’s my mother’s recipe. (This is for a 9-inch square pan. If you’re making for more than two or three, double the recipe and bake in a 9-by-13-inch pan)

Preheat oven to 450. Grease the pan with spray, canola oil, whatever. Throw in 3 tbsp butter. When the oven is hot, put the pan in and heat till the butter is sizzling. Pour the batter in quickly, using a swirly motion. Bake for 20-25 minutes or until golden brown and fluffy.

P.S. Peter gave me some quality coffee beans and my niece, Sophia, gave me some great ground coffee for Christmas too. I love good coffee. I have it with whole milk, heated first, with a teaspoon of slightly sweetened dark chocolate cocoa stirred in.

That, with Swedish pancakes with butter melting on top, and a swirl of maple syrup, and bacon? Hello.