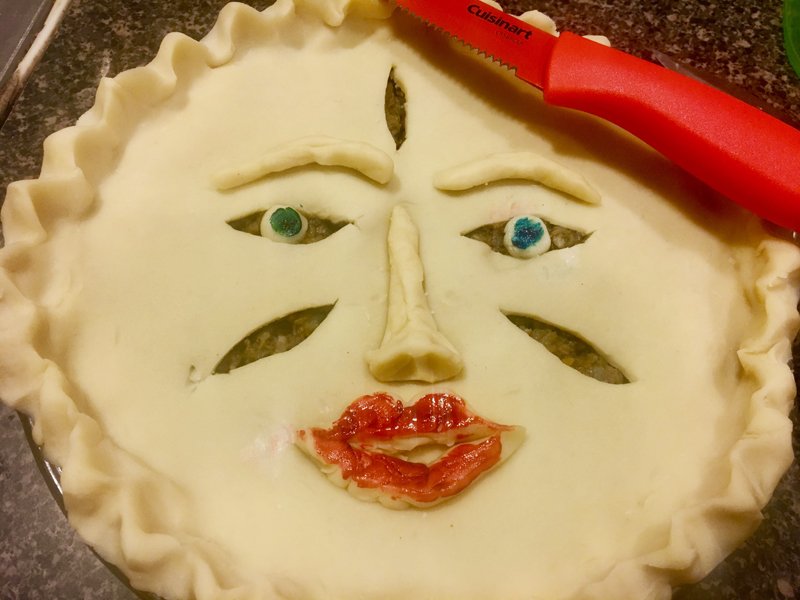 I wrote about torture pie a while ago, but most of you have probably forgotten – or never read it in the first place.

Even if you did read it, and remember it, it bears repeating: torture (really tourtière) pie is outrageous and oh-so-easy to make!

It is a paragon of delectable dishes.

As a side note, I got myself a “365 New Words A Year” desk calendar after stealing the one Christine LaPado-Breglia (I still haven’t attempted to actually speak her full name) got at The Lincoln County News Christmas party, where we had a Yankee swap – and then getting it stolen from me.

The first word, on Jan. 1, 2019, was “paragon.” I already knew the meaning, but I have rarely used it in conversation, or writing. So I’m going to throw words from the calendar into this column as often as I see fit, in hopes we’ll all get a little smarter in 2019. 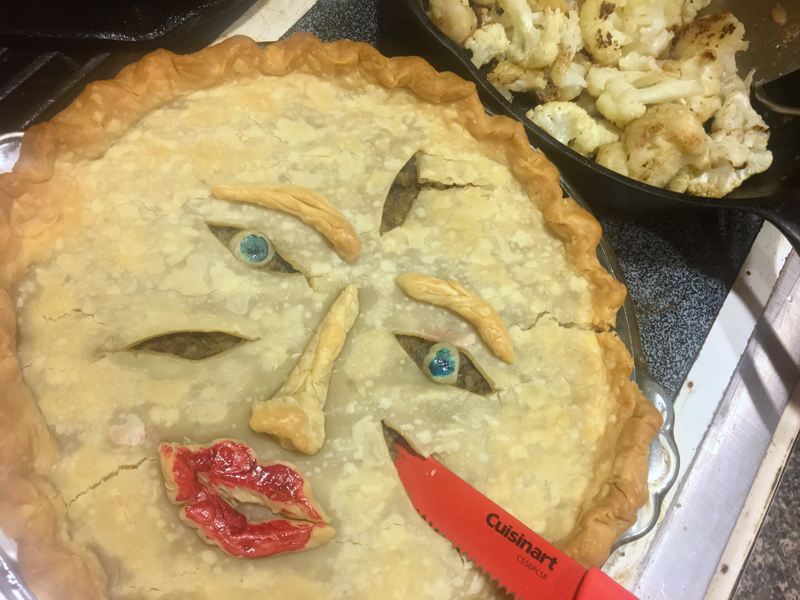 Torture pie, with pan-roasted cauliflower, smells heavenly when it comes out of the oven. (Suzi Thayer photo)

Paragon: a model of excellence or perfection.

According to the Food Network, Canada tourtière, a French Canadian dish, first appeared in Quebec in the 1600s. It was a Christmas Eve tradition, served after midnight Mass at late-night “reveillons.”

Sanford, where I spent my formative years, is home to a lot of French Canadians, and many of my friends’ mothers made it during the holidays. I swear you could smell it when you were outside on Christmas and New Year’s Eve.

The name change came from a friend, Sanny Norton, who told me she and her sister, Jane Burke, used to have it at a French friend’s house in Augusta. They called it torture pie, and now I do too. 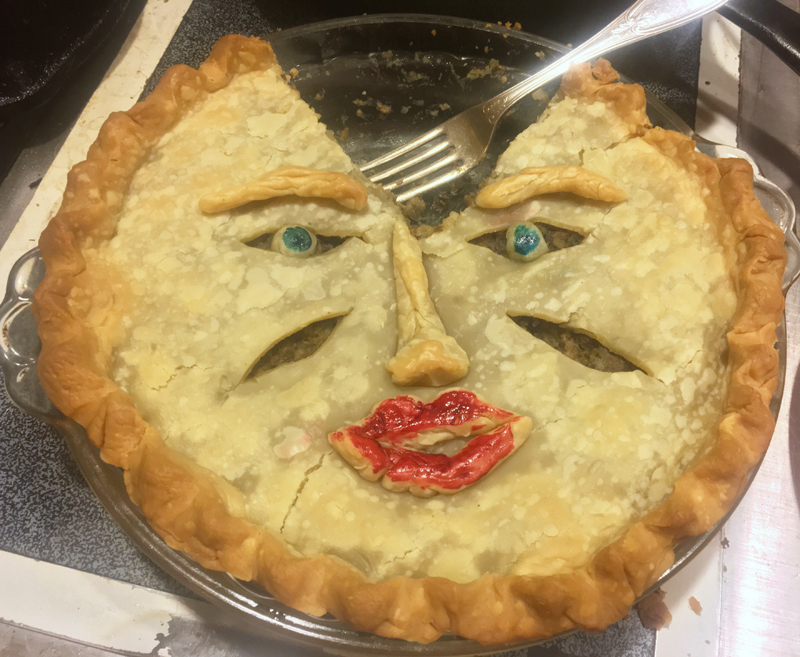 The dish is comprised of spiced meat, usually ground pork, sometimes mixed with ground beef, and mashed potatoes, all baked in a flaky pie crust. One theory is that the pie was originally made with pigeon, or tourte. Ugh. I love pigeons. But I love pigs too. And cows. I really shouldn’t eat it, but I do.

I got a hankering for one last week, and once I start thinking about any awesome food item, it’s all over. I have to have it. I had everything I needed but the ground pork, so off I went to get it. Of course, once I got to Hannaford I came upon around $65 worth of other stuff I didn’t need, but had to have. And I was getting low on bourbon.

I splurged and got a bottle of Bulleit. It was still close enough to Christmas that I felt justified in getting myself one last present. 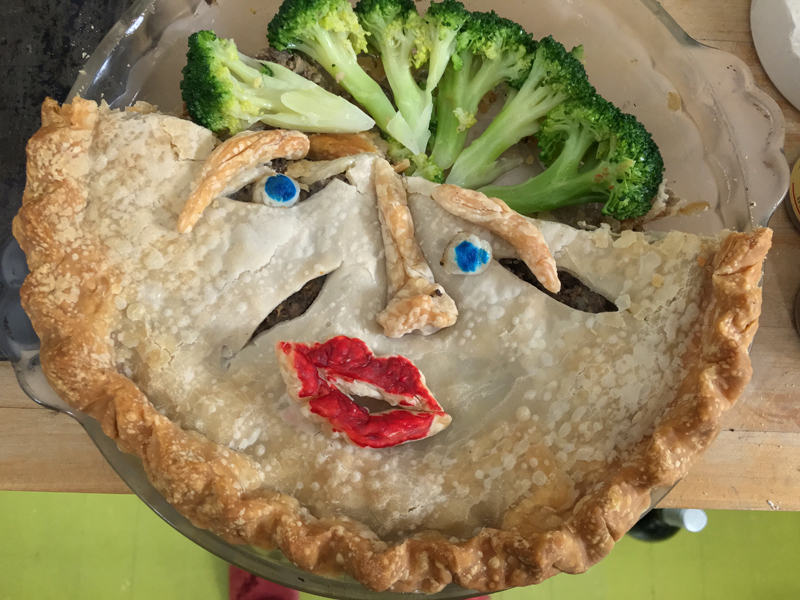 Leftover torture pie is great with a side of broccoli. (Suzi Thayer photo)

Here’s how to make torture pie:

Throw a pound of ground pork and 1/2 cup chopped onion into a frying pan over medium heat. Stir in 1/2 tsp each sage, allspice, and clove (or a little more if you love those spices like I do) and some salt and pepper. Cover and cook on low for up to a couple hours. 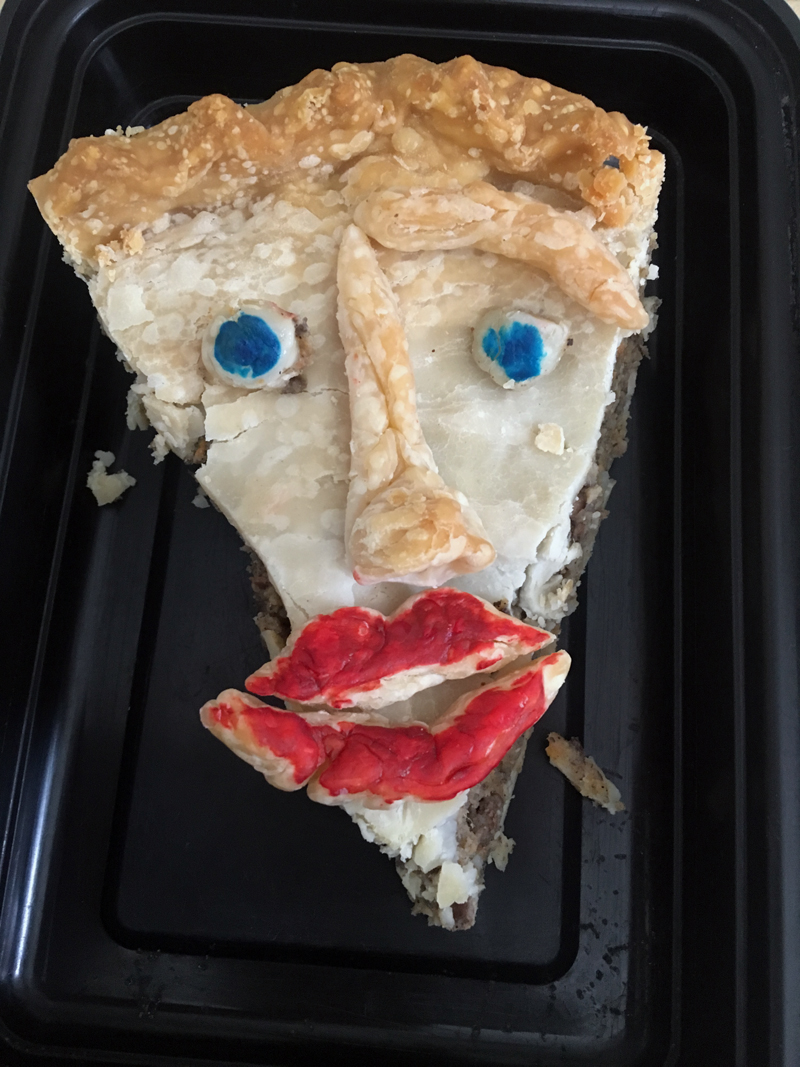 I added a little chicken stock and some olive oil because it seemed dry.

Meanwhile, if it’s anywhere near 5 p.m., make yourself a Manhattan. Then peel and boil a couple potatoes. I happened to have a sweet potato in the virtual pantry 🙂 and I virtually tasted that, mixed in with a russet and the spiced pork. It tasted good in my mind, so I used one russet and one sweet potato.

When done, mash them with one hand while carefully sipping your Manhattan from the other.

Once the pork has turned into heavenly smelling spicy goodness, mix it with the mashed potatoes and throw it into a pie crust (I used Pillsbury, but next time I’m going to try Maria Bourne’s recipe, which I’ll share), and cover with top crust.

Now comes the fun part. If you have leftover pieces of crust (I make sure I do), make some eyebrows, lips, and a nose, and place them on the top. With a little food coloring you can make the eyes blue and the lips red. I cut a few holes in strategic locations to allow steam to escape, and baked the pie, complete with a face, for 40-45 minutes.

It was awesome with the addition of sweet potato, and almost too funny-looking to eat.