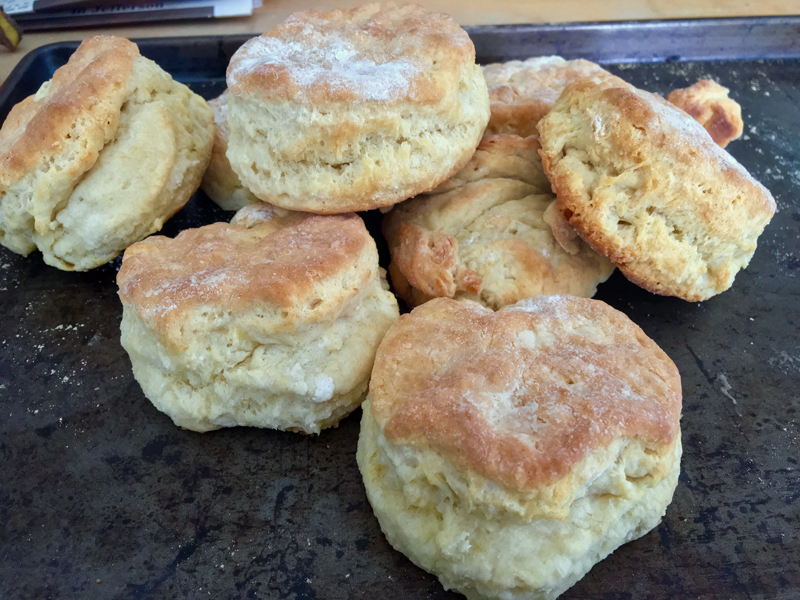 There are few things better than a hot biscuit fresh out of the oven — with butter. (Suzi Thayer photo)

There are only two things that aren’t good about a hot biscuit with butter melting upon it.

It’s not healthy, and it’s fattening.

Other than that, it’s one of the most sublime things you can bite into.

Seriously. When was the last time you made biscuits? Think about a hot buttered biscuit, fresh out of the oven. A biscuit is a simple thing, made with flour, milk, and shortening. There are no added flavors like cinnamon, or ginger, or chocolate – unless you experiment with chocolate biscuits, as I did. They were fabulous. I’ll tell you about them some other time.

If you don’t like biscuits, I’d love to know why. And if you DO like biscuits, you should get out the flour and butter and milk and make some. Right now. 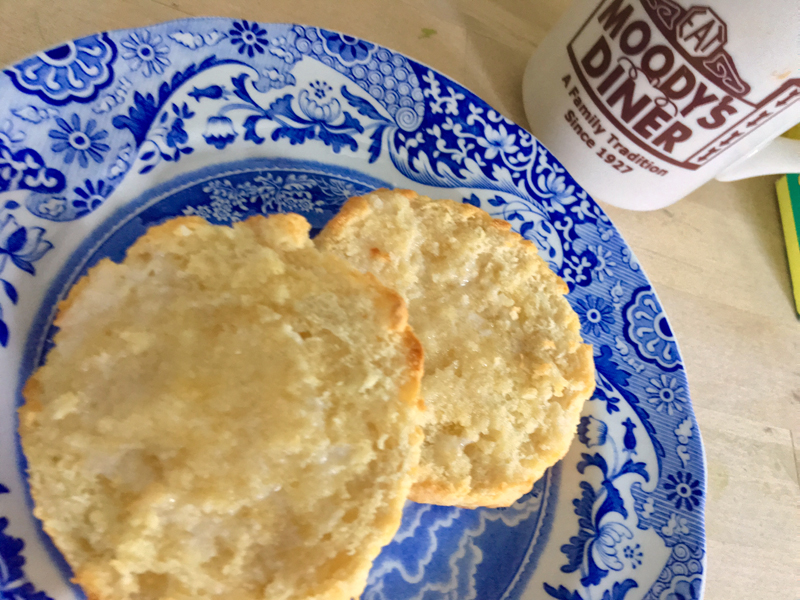 Get out the flour, milk, and butter and make some biscuits today — then cut in half and toast tomorrow. (Suzi Thayer photo)

I grew up on Bisquick biscuits. What child of a mother of four didn’t? Talk about simple: Bisquick and milk. And really not too bad. Probably a lot better than what the English used to call a biscuit.

My cousin Christienne, who lives in Shrewsbury, Shropshire, England with her British husband, Tom, and their two little princesses, Gwendolyn and Juliet, sent me a book she found in a library sale: “What Caesar Did for My Salad,” by bestselling Sunday Times author Albert Jack.

According to Jack, the biscuit began as a flat, hard, dry, cookie-like staple eaten by sailors on long voyages: “this unappetizing dried bread formed the major part of a sailor’s daily ration (of food).”

Jack goes on to say the Encyclopedia Britannica of 1773 notes, “Sea biscuit is a type of bread much dried by passing the oven twice to make it keep well for sea service. For long voyages they bake it four times and do so six months before embarkment and it will hold good for a whole year.’” 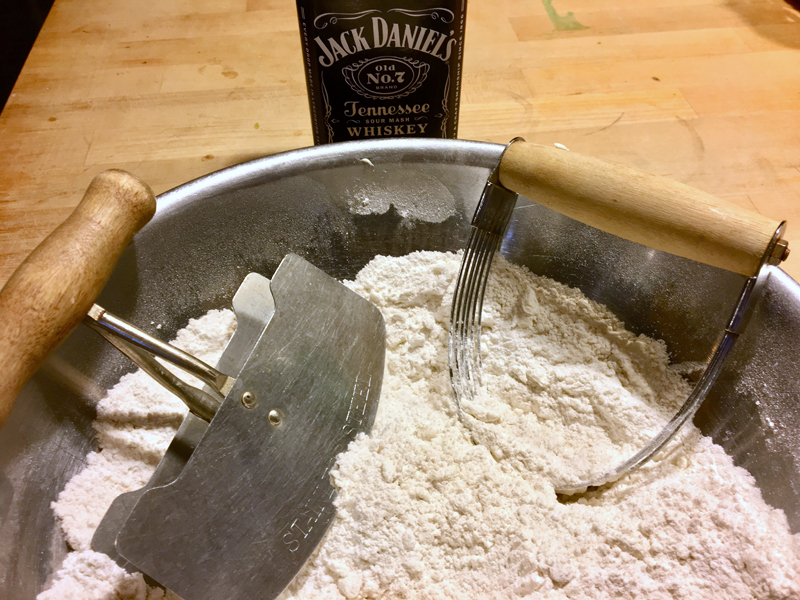 Cut the butter into the flour mix with a cutting tool or a couple of knives. (Suzi Thayer photo)

I stopped reading when he started talking about the unintended source of protein that eventually made its way into the biscuits. Gross.

The delectable homemade biscuits we make now bear (hopefully) no resemblance to those bad boys, though they only call for a few more ingredients – flour, a leavening agent, a liquid (preferably milk or buttermilk), and a fat (preferably butter).

Not all biscuit bakers agree on the same ingredients, but most agree that the dough should not be overworked, as that will lead to tougher, flatter biscuits. Another rule agreed upon by most bakers is that the ingredients should be cold – even the flour.

So throw the flour, the milk or buttermilk, and the butter into the freezer for a half-hour before starting.

I go back and forth between the recipe on the Bakewell Cream can and the one in my recipe box that’s been there practically since those sailors were eating those disgusting, hard, dry things while making their globetrotting voyages. 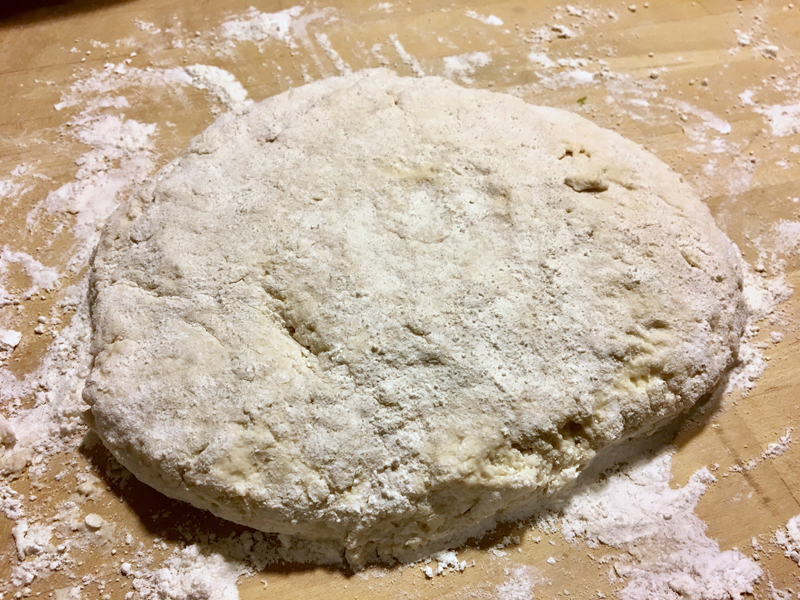 Being gentle when patting the dough down makes for more tender biscuits. (Suzi Thayer photo)

I honestly can’t decide which I like better, so if you love biscuits as much as I do, try them both. If you don’t have a can of Bakewell Cream in your pantry, go get one and simply follow the directions.

And here’s my age-old recipe:

Sift 2 cups flour with 2 tbsp baking powder, 1 1/2 tsp sugar, and 1 tsp salt. Cut 5 tbsp (cold) butter into little pieces and work the butter into the flour mixture till it resembles coarse meal. Throw in a cup of cold milk and form into a rough ball.

Place it on a lightly floured work surface and (gently) pat it down to about a 3/4-inch thickness. Fold it over and roll it (gently) with a floured rolling pin until it’s around 3/4 inch again and cut out circles with a biscuit cutter or a glass. Don’t twist it – that will make them tough.

Throw them into a 425-degree preheated oven and bake for 15 or 20 minutes – till they’re light golden brown on top. Cut one open as soon as it comes out of the oven and slather too much butter on it. Eat it. OMG. There’s really not anything better than a hot, flaky biscuit straight out of the oven. 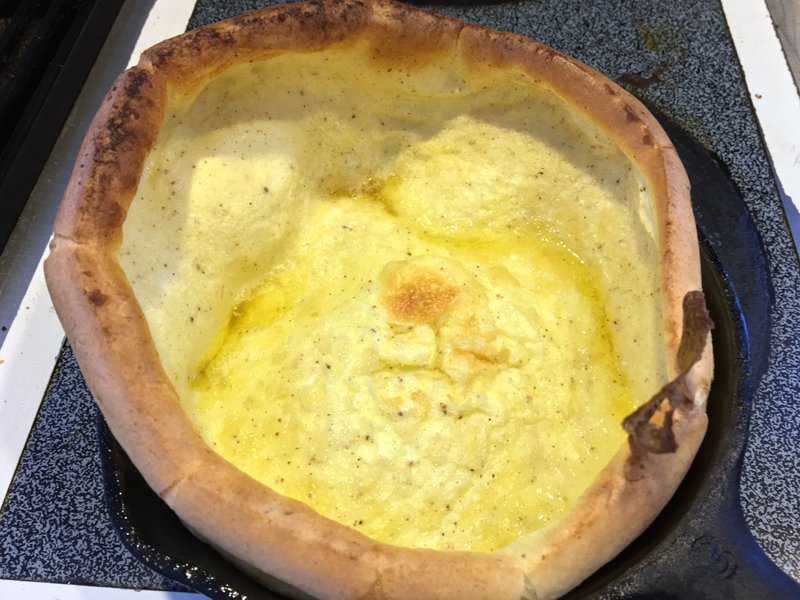 If you don’t feel like making biscuits, make a Swedish pancake in a round cast-iron pan. (Suzi Thayer photo)

And by the way, the chocolate biscuits are baked with a square of dark chocolate inside. Just you wait.