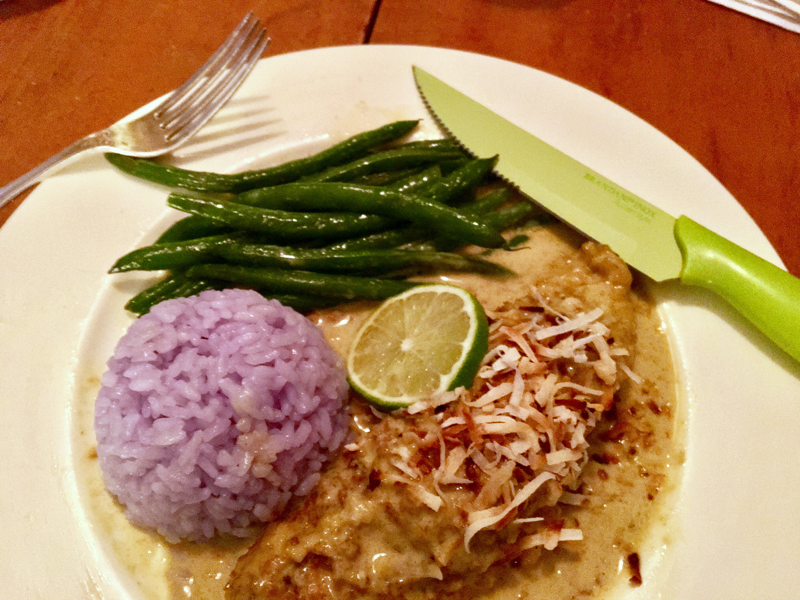 The dinner was delicious and beautiful. I served it on a simple white plate so as not to detract from the colors in the food. (Suzi Thayer photo)

Last week I interviewed the owners of O-Cha, soon to be Racha Noodle Bar, in Damariscotta. I talked to Job; his wife, Em; and his sister, Jib, about their new restaurant, and Em mentioned a dish she had developed that will be served at Racha: spaghetti curry with a green curry sauce.

I love curry, and an hour later I was gathering the ingredients for green curry chicken.

I’d gotten some tips from Job and Em, and I figured I’d Google green curry and wing it.

One of the first things I learned was that a lot of Thai cooks use green curry paste, as opposed to making their own. I’m not a fan of meat pastes – chicken and beef pastes are merely concentrated meat flavors. I’ll stick to natural stocks, and herbs and spices, for flavoring in meat dishes, thanks.

But curry paste is a combination of natural ingredients that are blended or mashed together. It is favored by Thai cooks because of the long list of those ingredients, several of which are hard to come by in Midcoast Maine. 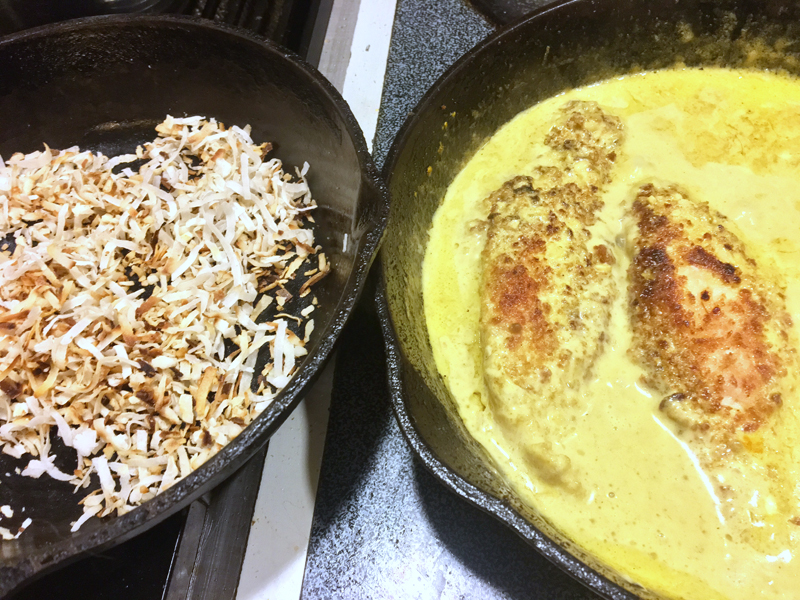 One site, thaitable.com, says, “Even though most people living in Bangkok buy store-bought curry pastes, nothing compares to the scent of the curry paste being made. It perfumes the whole kitchen. The arduous process, from sourcing the ingredients to pounding out the paste, is daunting but the reward is grand.”

Those words, “arduous,” “sourcing,” and “pounding,” scared me. I sourced some Thai Kitchen green curry paste and called it good. The rest wasn’t the least bit daunting, especially with a Manhattan.

In addition to the green curry paste, which I learned is green thanks to green chili peppers, all I needed for my version of green curry chicken (which I settled on after spending more time researching and texting Job and Em than it would have taken to drive to Portland and source all the ingredients for the paste), was coconut milk, a lime, Thai fish sauce, chopped garlic, fresh basil, and chicken. 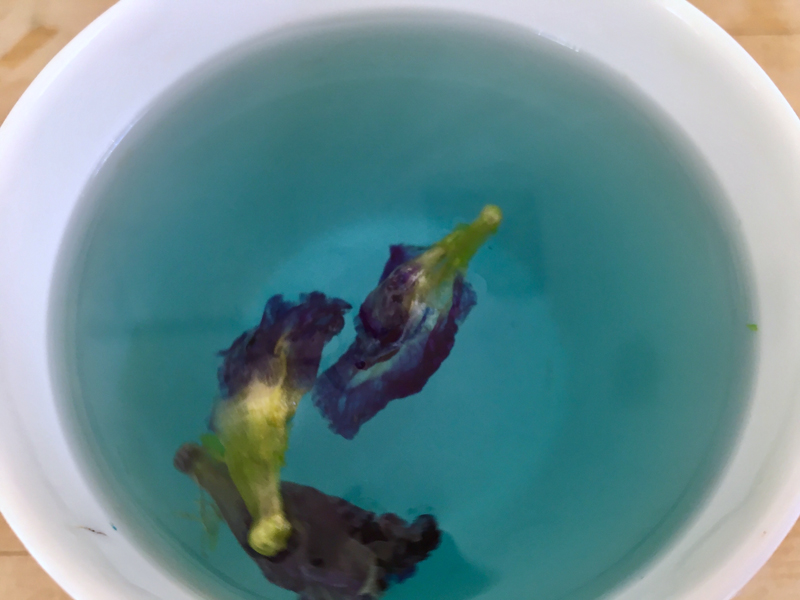 Butterfly pea flower tea is blue until you add a slice of lemon or lime. (Suzi Thayer photo)

Here’s how I made it:

Coat boneless chicken breasts, pounded a little to tenderize, with panko, and saute in a few tablespoons of canola, with a few dashes of sesame oil.

Remove the browned chicken and saute a tablespoon of crushed garlic in the pan, then stir in a couple tablespoons of green curry paste, an 8-ounce can of coconut milk, and a tablespoon of brown sugar.

Add a tablespoon fish sauce and a teaspoon each of cumin, ginger, turmeric, coriander, some shredded basil leaves, fresh lime juice, and a couple more dashes of sesame oil. (You can make it with just the paste, which contains some of those spices I added, and coconut milk. I just decided to go crazy.)

Return the chicken to the heavenly smelling creamy stuff and simmer for a few minutes, making sure the chicken is cooked through. Duh.

Then there was the purple rice. While I was interviewing Job and Em, I noticed a big jar of dried flower blossoms on the bar. My ADD kicked in. “What are those?” I asked. Job, who was in the middle of a sentence describing different types of noodles, politely stopped and explained that they were dried butterfly pea flowers, or Clitoria ternatea, commonly used to make tea in Thailand. 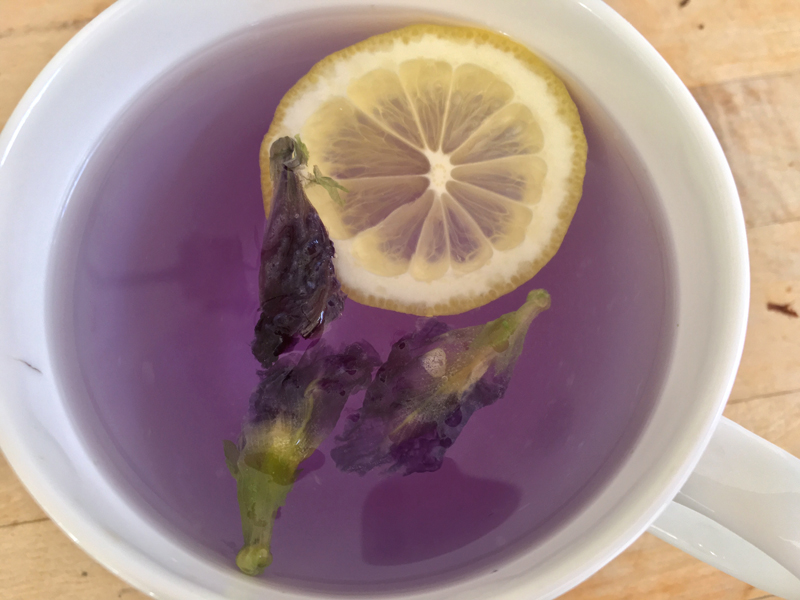 Em made me a glass of iced tea with the dried flowers. It was purple, with a slice of (green) lime. It was beautiful. You know how I obsess over beautiful food? It took a while to get back to noodles.

But in the meantime, Em explained that the tea made with the flowers is blue until you add a slice of lemon or lime, when it magically turns purple. She showed me a photo of purple rice that was made using those dried flowers, and gave me a container of them.

In all honesty, the purple rice was the real impetus for making my green curry that night.

I’ve since learned that the butterfly pea flower tea isn’t just beautiful. It’s rich in calcium, magnesium, potassium, zinc, iron, and manganese, and it’s full of antioxidants. There are claims that it’s beneficial in the treatment of neurological problems like depression and anxiety, and helps improve memory. 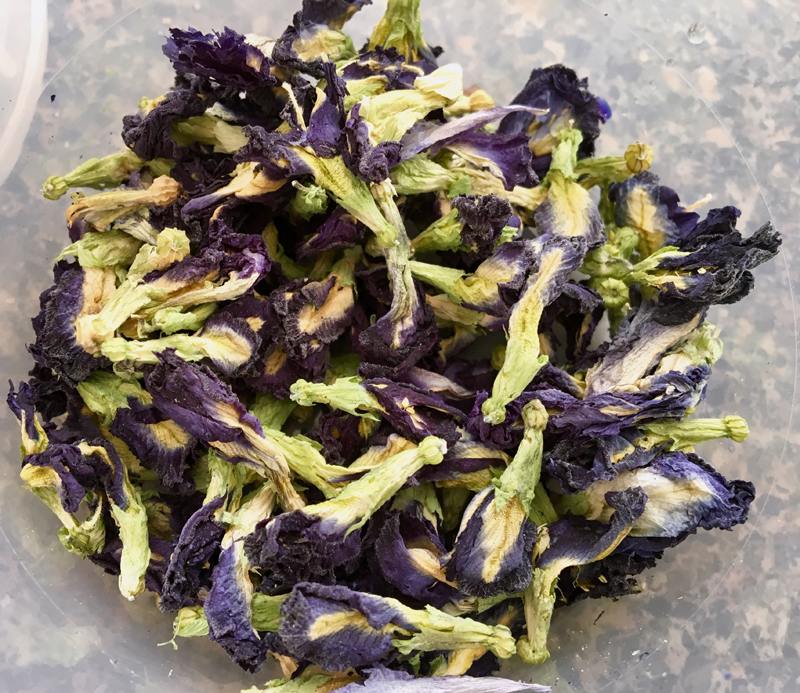 I also read that it helps prevent premature aging of skin and hair.

All that, and it’s beautiful. I was sold.

Anyway, I made some purple rice and served it with the green curry chicken. I also toasted some coconut in a cast-iron pan and sprinkled it over the chicken, and steamed some fresh green beans, then sauteed them in a little sesame oil.

The dinner was delicious and beautiful. I served it on a simple white plate so as not to detract from the colors in the food and had some rose in an elegant pale pink wine glass.