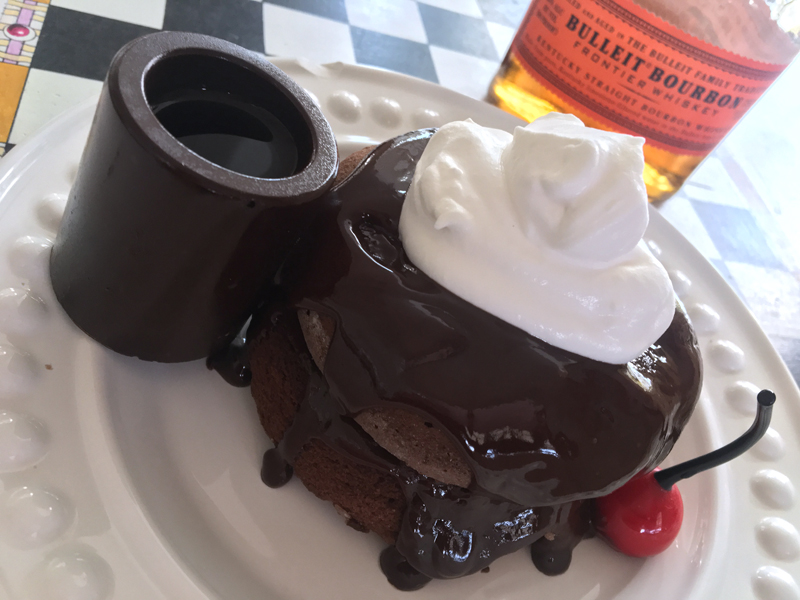 It’s no secret that I love chocolate cake. I also love whiskey, as evidenced by my love of Manhattans.

So dark chocolate bourbon cake was kind of a no-brainer for me.

As much as I love cake – especially chocolate cake – I try to not make it often, as I live alone and hate waste. Therefore, unless I give some away or invite someone over to help, I’ll eat the whole thing (not in one sitting).

I recently got a few cute little cake pans though, so now I often make three or four mini cakes instead of one big one. That way I can eat one and freeze the others.

I made three little dark chocolate bourbon cakes this time, and when they came out of the oven they smelled so good I ate one while it was still warm. I couldn’t resist.

After much ado and some Facebook messaging with Peter Ross about how to make these cakes even better with something on top, or in the middle, I made a decision – a combination of dark chocolate ganache and whipped cream.

I’d never made ganache. Weird for someone who loves chocolate and cake. “This chocolate cream icing is a pastry chef’s staple,” says the Epicurious website. In my defense, I’ve never claimed to be a chef.

Talk about a no-brainer. You can drink a shot of whiskey (with a cherry in it) or whatever else you darn well please, then eat the shot glass. 🙂

So anyway, this cake is a must for chocolate and whiskey lovers, and with the ganache and whipped cream, it’s about as decadent as you can get.

If you don’t love whiskey, make it for someone who does. Valentine’s Day is coming right up.

There were quite a few recipes for it and all were very similar. I used one from Melissa Clark, of New York Times Cooking.

Aside from ganache, another thing I’ve learned from Peter Ross is that there’s a good reason for the practice of mise en place, a French term that means having all your ducks in a row, kind of. Literally, it means “set in place,” or having everything prepped and ready to go before you start cooking. It’s what all the cooks on TV do.

I have a tendency to jump in headfirst and run around the kitchen, from the counter to the (virtual) pantry to the fridge, gathering the ingredients as I go. I blame it on ADD. It’s much easier to have everything measured and ready to rock and roll, plus it’s less confusing when you’re trying to follow a recipe while sipping a Manhattan. 🙂 Trust me.

So here’s what you do for the most awesome dark chocolate bourbon cake ever.

Preheat oven to 325, and grease and flour a big Bundt pan, two loaf pans, or a few cute little cake pans like mine.

Melt the unsweetened chocolate in a microwave or a double boiler over simmering water, and let it cool. Take a sip of your Manhattan.

Now beat the butter, then beat the sugar in, being careful to not send it flying all over the kitchen, like I did. I hate that step. Then beat in the eggs, one at a time. Add vanilla, baking soda, and melted chocolate.

The recipe says to keep scraping down the stuff on the sides of the bowl with a spatula. I say “duh” to that.

Next, dump around a third of the whiskey or bourbon or rye mixture in, blend, then dump in half the flour and blend that in. Repeat, and finish with the last of the whiskey mixture.

Pour, or scrape, with that rubber spatula, into a prepared pan or pans, and bake for a little over an hour for the Bundt pan, less for smaller pans. My cute little cakes took around a half-hour. Check by sticking something skinny into the center. If it comes out clean, you’re good.

Peter’s recipe for the ganache: Melt a pound of semi-sweet or dark chocolate with a stick (1/4 pound) butter. Stir in a cup heavy cream. Simple and totally awesome.

I spread some of the warm ganache between two layers of a little cake, spread some more over the top, and threw on a big dollop of cream, whipped with a teaspoon bourbon instead of vanilla. Then I poured a shot of Bulleit bourbon into one of the chocolate shot glasses, threw a cherry in, and served that on the side.