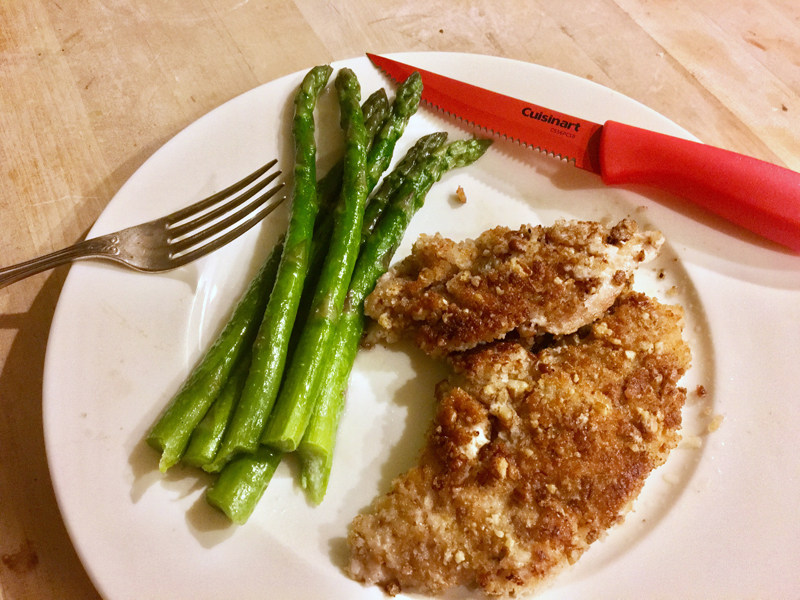 OK kids, this week’s recipe is outrageous. It’s pecan-crusted chicken, tenderized with buttermilk. Don’t worry if you don’t like buttermilk, or don’t think you do, because chances are you’ve never even tried it.

My mother told me my great-grandfather drank the stuff, but I never had much use for it, except for making buttermilk biscuits, until I learned that it’s a great, natural way to tenderize chicken. When you marinate chicken in it, it will be the tenderest, juiciest chicken you’ve ever had. The enzymes, acids, and calcium in buttermilk break down the proteins in the chicken, tenderizing it.

Buttermilk is the liquid that’s left behind when milk is churned into butter, but most of the buttermilk you’ll find these days is cultured. Whatever. It’s still buttermilk.

In the past, every time I bought a quart of buttermilk for biscuits, I ended up pouring the unused portion down the drain a month later. And I hate waste. I’m cheap, remember? 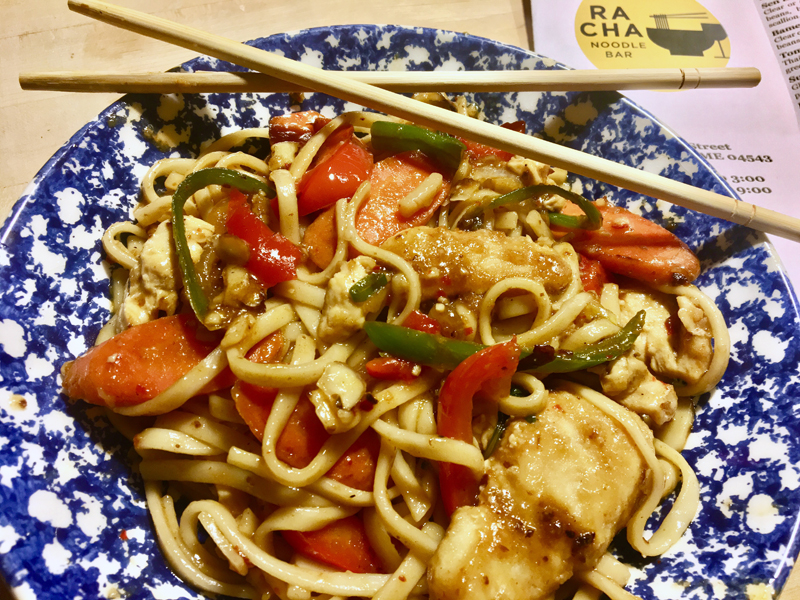 I have been loving the noodle dishes at Racha and tried my hand at making them at home. They weren’t Racha, but they weren’t bad. (Suzi Thayer photo)

So guess what? You can make your own (substitute) buttermilk. And even better – you can make a cup of the stuff, so you won’t have any waste. (You won’t want to drink any excess.) All you need is milk and vinegar. You won’t know the difference when your chicken is so tender and juicy you can cut it with a fork. 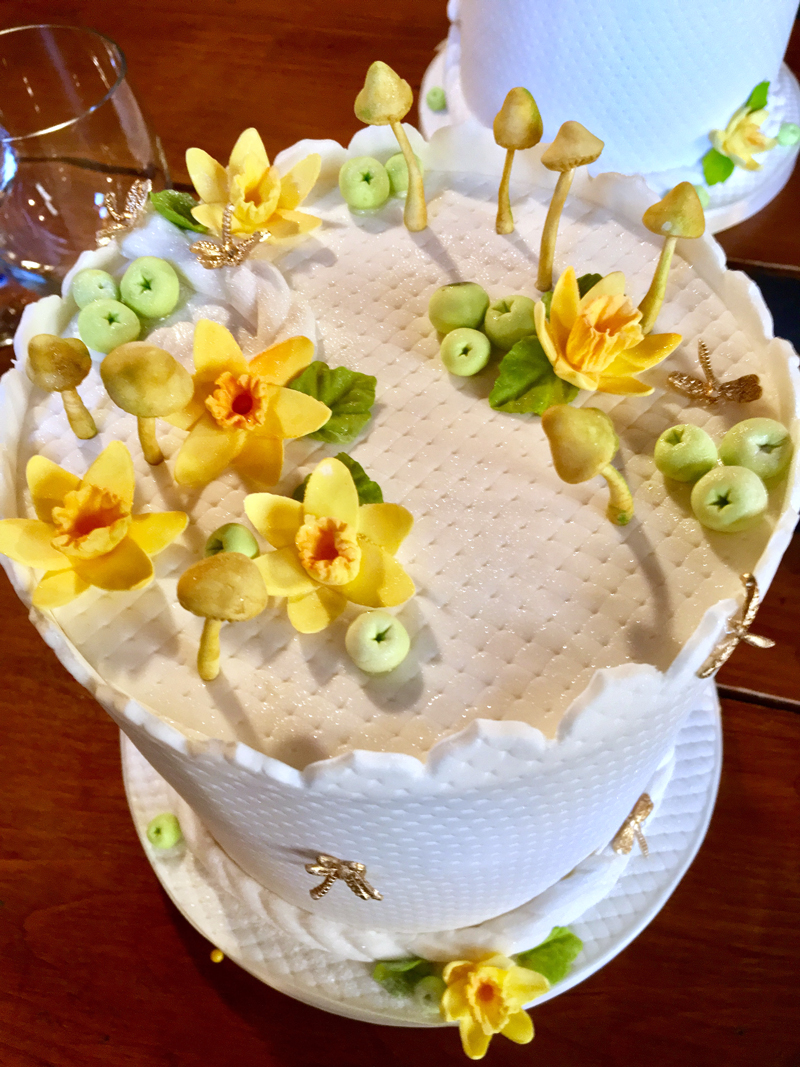 My friend Trisha Moroz made me another cake last week. She knows I hate mushrooms. 🙂 But I love daffodils. Lucky me. (Suzi Thayer photo)

Add a tablespoon of vinegar to a cup of milk. Whole milk is best, but if you have low-fat in the fridge, don’t sweat it. Just add a little more vinegar. Stir it and let it sit for a few minutes. It will thicken up and look just like buttermilk in no time flat.

So here’s what you do for the crunchy pecan coating on the outside, tenderest, juiciest chicken on the inside dish you’ll ever have. Unless, of course, you’ve had it before. I hope you haven’t because I want to take all the credit when you make it for the first time, even though I didn’t invent it.

I often Google recipes, even when they’re something I’ve been making forever, to look for updates and variations on tried-and true ones. And I rarely follow a recipe to the fine details, though I will if I think the cook who shared it is smarter and a better cook than I. And there are plenty of them out there.

I did Google pecan-crusted buttermilk chicken, and there was some variation, but most of the recipes were very similar. It’s simple. All you need is boneless chicken breasts, pecans, panko, or plain old breadcrumbs (panko is Japanese for breadcrumbs – they’re lighter and crispier than regular ones) and make-believe or real buttermilk.

Pound out the boneless chicken breasts (I use a heavy metal mallet) to around 1/4- to 1/2-inch thick and throw them into a bowl or pan with the buttermilk. Stick them in the fridge and marinate for around an hour. The first time I did this I left them in overnight. Don’t do it. I learned that chicken can be too tender. It was gross.

Meanwhile, crush up some pecans in a plastic bag. I used the same mallet, but a rolling pin or anything flat and heavy will work. Throw in some of the panko or breadcrumbs to make a mixture of around half and half, and add a hefty pinch of salt.

Dump the pecan mixture on a plate or baking sheet and coat the buttermilk-marinated chicken on both sides. Press it right into it to get it good and coated. 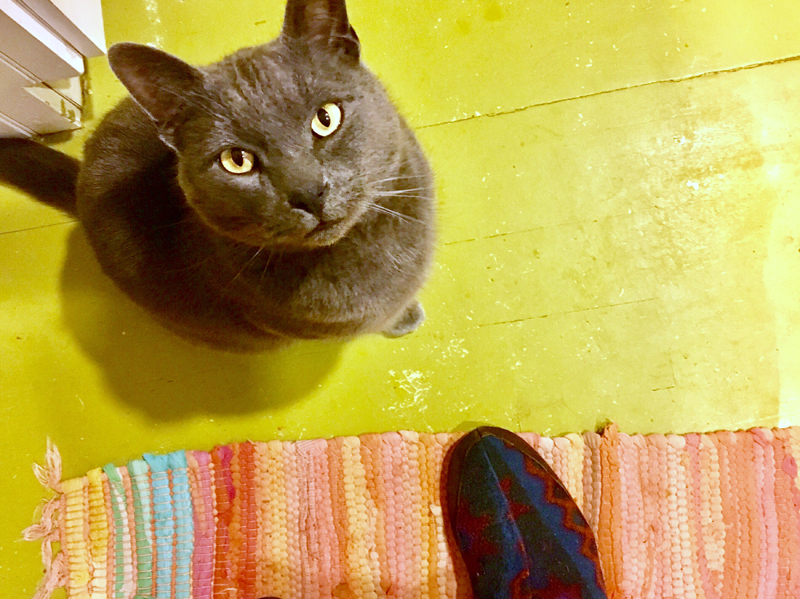 Bunny has moved in and she adores me. I love that. (Suzi Thayer photo)

A squeeze of lemon juice never hurts either.

I served it, this time, with asparagus, because I found some that wasn’t those awful skinny stalks I’ve been seeing lately. I don’t get why some seek out the skinny stuff. Asparagus needs a little meat on its bones. Just like us. 🙂

But seriously, all the cake I’ve been writing about, and of course eating, (duh) has packed on a little more meat than I need, or want.