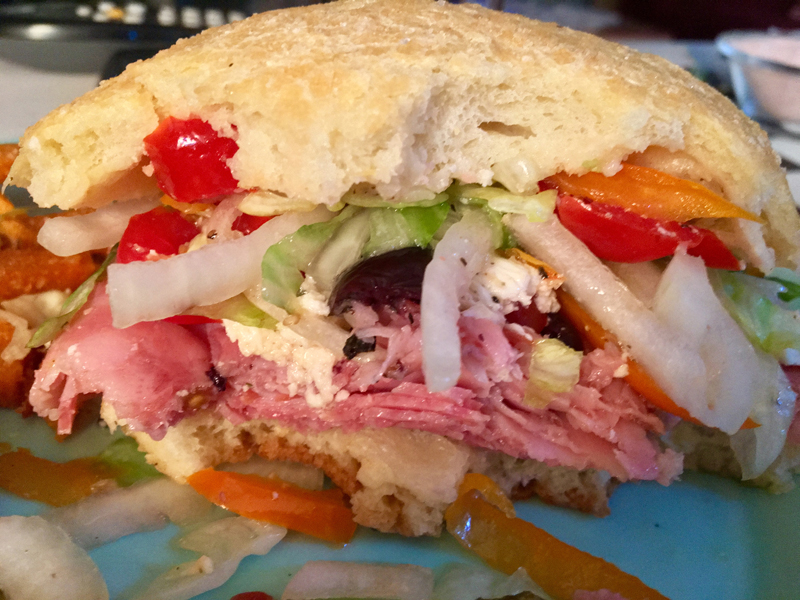 The lowly sandwich is way underrated. When you go out for dinner, or even lunch, a sandwich might be at the bottom of your list of coveted items on the menu, especially during the summer along the coast of Maine. There are so many more exciting things to order: lobsters, fried clams, oysters, scallops, steamers, mussels, fish chowder, fish and chips, burgers and fries … you know.

I started this column talking about sandwiches a couple weeks ago. I had made a sandwich for dinner. It was so good I made another one last night. It was kind of time-intensive by the time I got everything cut up and ready to throw together, so I had a Manhattan while doing that. Any excuse.

So anyway, once again I had started thinking about the Italian sandwich at the Mediterranean Kitchen in Damariscotta, and once again I had to have one. I drove over around 6, and it was closed. Sunday. Ugh.

So I continued on to Hannaford and picked up the ingredients I’d need for a reasonable facsimile. Facsimile: “… an exact copy, especially of written or printed material … also called fax.” OMG, does anyone even use fax machines anymore?

Of course I had to Google sandwiches, because I don’t know how not to when I get something in my ADD-addled mind. Hmm … ADD, addled. Never mind.

Anyway, according to most accounts, the word “sandwich” first appeared sometime around 1762, when the 4th Earl of Sandwich, England, John Montagu, asked for some meat served between two slices of bread. He was supposedly playing some gambling game, and he didn’t want to be bothered with utensils. 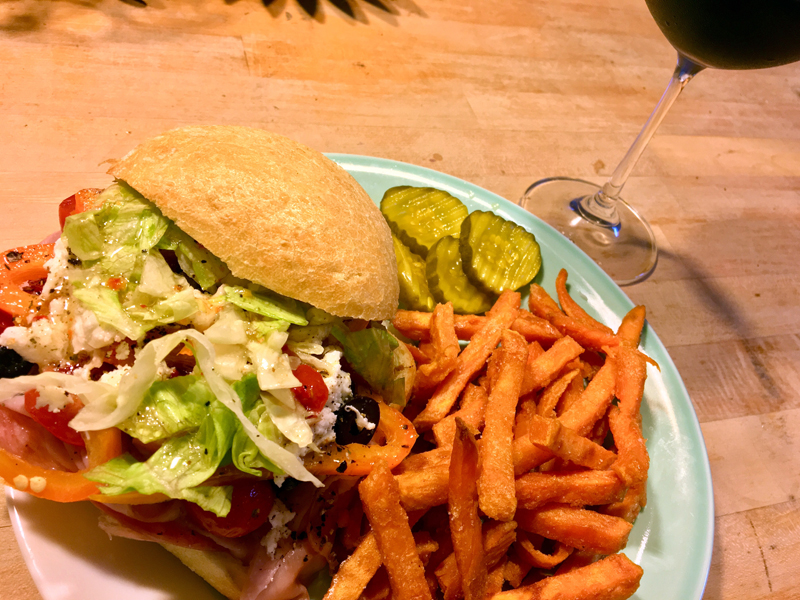 Don’t you love it? For me, the most appealing thing about a sandwich is that you can hold an entire meal in your hands. A sandwich is a meal in itself. It can contain all the necessary food groups and all kinds of other delicious stuff. And you can eat it standing up, sitting, or lying down. Seriously. The only drawback to eating a sandwich lying down is you can’t sip wine with it.

Then, the most important ingredient: the bread. Just as manners maketh man, bread maketh sandwich. Never use white balloon bread for a sandwich. Never. You can throw anything you want inside, but the bread will make or break the sandwich.

That’s one of the reasons the sandwiches at Mediterranean Kitchen are so outrageous. Have you had one of those rolls they use? They’re big, they’re heated, and they’re crunchy on the outside with big air holes inside. I’ve asked the no-nonsense owner if he makes them. “No,” he says. I don’t dare to press him. 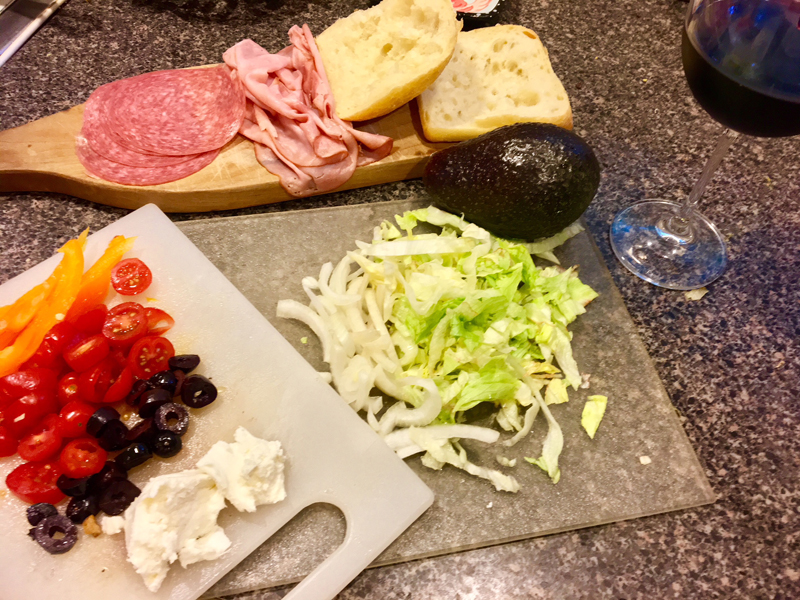 Anyway, the point is that a good crusty French baguette, or roll, or a reasonable facsimile 🙂 will make for a good sandwich. Period.

The first time I realized that the sandwich could be good enough for dinner was when my father took us to Red’s deli in Sanford. I don’t think that was really the name of the joint, but the owner was a friend of Dad’s. He had red hair.

It was a treat to get dinner to take home from Red’s, usually on a Sunday night, and it was usually pizza. One time, when I went with Dad to place our order, I saw a chicken salad sandwich someone had ordered. It was on a huge, homemade, crusty roll. And Red made those rolls. I can still smell the aroma of them baking. I ordered a chicken salad that night and it was the best thing I’d ever tasted in my 13-year-old life.

The pizza from Red’s was awesome too, so after getting that sandwich Sunday nights became problematic for me. Pizza? Or chicken salad sandwich on an elegant, crusty roll? I have a hard time making decisions about simple things, never mind important ones like that. If I had to choose between those two things right now? Ugh. I’m just glad I don’t. 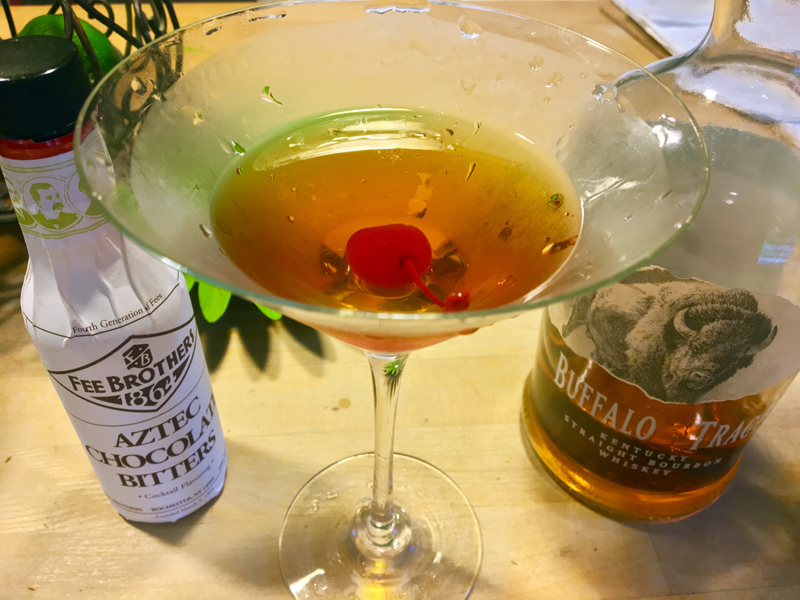 A Manhattan makes cooking, and everything else, more fun. (Suzi Thayer
photo)

OK, so think about having sandwiches for dinner tonight. I’m telling you, you’ll thank me. Especially if you get some frozen Alexia sweet potato fries. They’re as good as any you’ll get in a restaurant.

And by the way, after you’ve thrown all those ridiculously scrumptious things on the bottom half of a crusty, heated roll, don’t forget the salt and pepper, and a drizzle of my favorite salad dressing: Good Seasons Italian. It comes in a package and you add vinegar and oil.

And don’t forget to shred the iceberg lettuce. Shredded lettuce on a sandwich will help make it the best sandwich you’ve ever had. I kid you not.

Oh, and drinking a Manhattan while building a sandwich makes it really fun.

And the beat goes on. See ya next week!