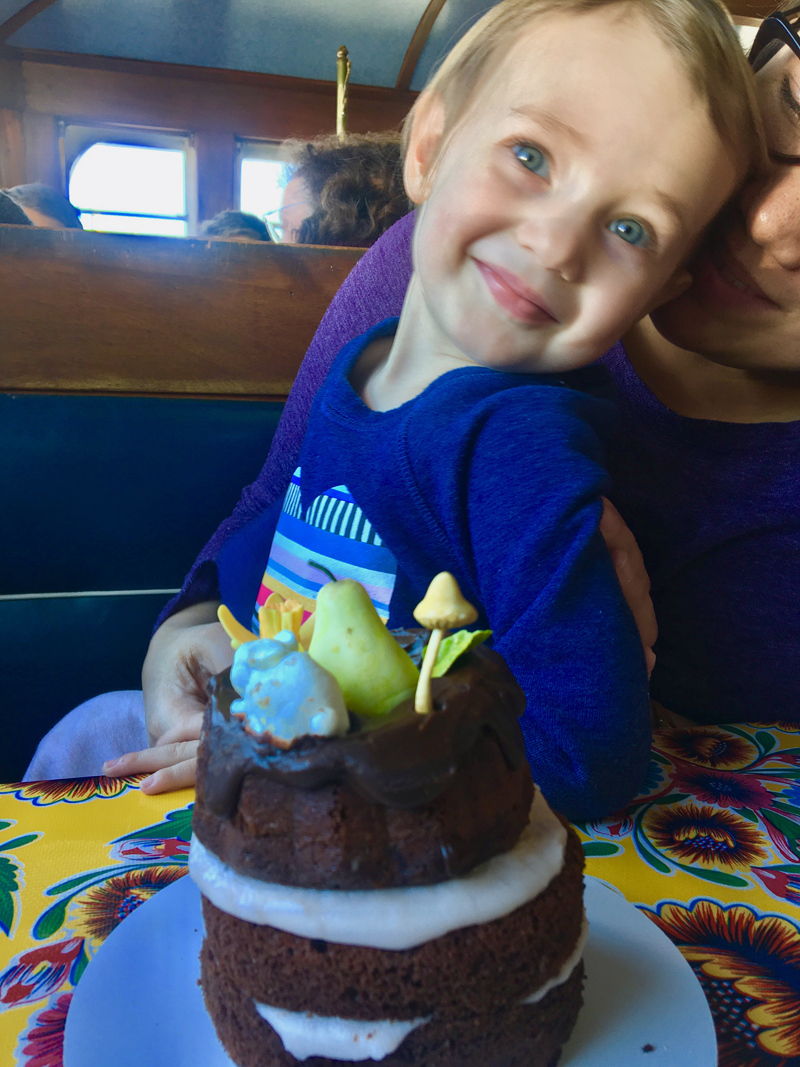 Ruby, my little grandniece, loved the cake I made her. (Suzi Thayer photo)

If you’re attempting to lose weight, but crave good food and lack willpower, don’t read this. But if you’re lacking in imagination, and want to eat delicious food like it’s going out of style, read on.

I’ve been eating a lot of good food lately, both at home and in restaurants. How anyone can diet when the world, and even just the Midcoast, is teeming with awe-inspiring, fattening food is beyond me.

Seriously. It’s a veritable wonderland of gut-wrenchingly (if you’re dieting) fabulous food out there.

I don’t know about you, but the mere mention of something that sounds scrumptious is enough to make me crave it and seek it out. So I’m going to tell you about some of the awesome foods I’ve consumed over the past couple weeks.

I’ll start after the two days I attempted to lose weight by following the keto diet. I have no willpower when it comes to good food. If it’s available, I want it, whether my jeans are too tight or not.

Pizza: that was the first thing I craved after essentially starving myself for two whole days on the low-carb diet. I happened to have some Portland Pie dough in the freezer and I had recently bought a new metal pizza pan, riddled with holes to make the crust crispy.

I had fresh mozzarella; extra-virgin olive oil; some decent red sauce, in a jar; crushed garlic, also in a jar; a sweet orange pepper; and some sliced Genoa salami that I’d stuck in the freezer. If that doesn’t inspire you to make a pizza, I don’t know what will.

Uh oh. I want one right now. Power of suggestion.

But unfortunately, or fortunately, depending on how you look at it, I had to eat leftovers from yesterday, which happened to be St. Patrick’s Day. If you’re thinking the leftovers are corned beef and cabbage, etc., you’d be partially correct.

A strange phenomenon occurred on this St. Patrick’s Day, 2019. There was no corned beef or cabbage to be found, if you were a slacker, like I was, and hadn’t planned ahead.

My St. Patrick’s Day started in Gardiner, where I met my awesome nephew, Sam; his awesome wife, Vika; and their doubly awesome daughter, my grandniece, Ruby, at the A-1 Diner, for brunch.

Sam and his (sorry) awesome family moved to Maine from Colorado last week. I had yet to meet 2 1/2-year-old Ruby, who I call Ruby 2 Shoes after my sweet kitty. To be clear, she wasn’t named after my kitty.

We had a great breakfast. If you haven’t eaten there, do. Vika and I had breakfast burritos, with sausage. They were huge, and delicious.

Ruby was acting shy and demure until I presented her with the mini, three-tiered chocolate cake with pink buttercream frosting and chocolate ganache I’d made for her. It was adorned with some sweet little confections in the form of daffodils, mushrooms, a pear, and a bunny that I’d confiscated from a cake made by my friend Trisha Moroz.

That broke the ice and I was rewarded with one of her adorable little smiles for the first time. I took that opportunity to tell her she was going to love her aunt Suz, whether she wanted to or not. I think she got my sense of humor.

So anyway, we talked about the fact that it was St. Patrick’s Day, and that none of us made a big deal of it, being a conglomeration of English, Scottish, French Canadian, and Filipino descent.

I headed to Hannaford in Damariscotta. No cabbage, and only a few huge bags of carrots that would have rotted before I ever got through them. I went to the meat department. No corned beef.

But there, in the empty corned-beef bin, was a lone head of cabbage. Some slacker had thrown it in there when he or she discovered there was no corned beef to be had.

But I had set my sights on a boiled dinner of some kind, and there was no turning back. I grabbed the lone cabbage and a big, thick slice of ham; some turnip; a couple white sweet potatoes; and some bourbon (duh), and headed home.

I simmered the ham in chicken stock for an hour or so, till it fell apart, took it out, and cooked the veggies in the hot broth. It was delicious, and I didn’t miss the corned beef.

OK, now that I’ve pretty much used up my 1,000 or so words for this week, I’ll just list some of the other food I’ve cooked or eaten in a restaurant over the past couple weeks. Read it and weep, and cook, or go out and get your own.

I also consumed a few Manhattans and martinis. And I’ve been wearing stretchy leggings throughout.