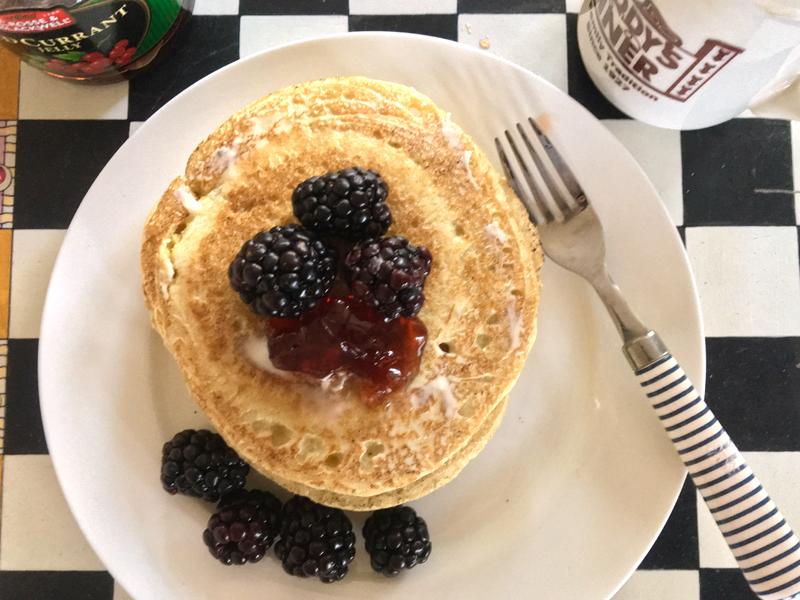 Ployes slathered with butter, a little jam, and some blackberries, with a cup of coffee, make for an awesome breakfast. (Suzi Thayer photo)

Have you ever had ployes? They’re similar to pancakes and crepes, but better in so many ways.

For starters, they’re more healthful than pancakes. Ployes are fat-, cholesterol-, lactose-, and sugar-free, and if you think that makes them less decadent, taste-wise, think again. They’re a blend of buckwheat flour, white flour, and baking powder. Riddled with air holes, they also resemble crumpets. And they’re just as awesome.

And they’re more fun to eat than pancakes. I roll them up, after slathering them with butter, and eat them like I’d eat a crepe.

I Googled them. The Saveur website says about a ploye, “Don’t call it a pancake. A ploye is not a crepe. Nor is it a pancake. For one, you don’t flip it.”

It’s true – you only cook a ploye on one side.

The next best thing about ployes is that they’re simple to make. You can make them from scratch, but why bother when you can buy the ready-mixed (with no additives or preservatives) bag produced by the Bouchard family in Fort Kent (ployes.com).

The family has been producing the mix since 1983. They mill their own buckwheat flour and developed the recipe based on one created by French Acadians who settled in northern Maine. “Ployes are as elegant as a fine crepe, as hearty as a breakfast pancake, and as versatile as any bread,” states the Bouchard Family Farms website.

I called the Bouchard headquarters and spoke with Janice Bouchard, a fifth-generation family member. When I told her one of the things I love about ployes is their sponginess, she told me the family describes them to kids as “kind of like SpongeBob SquarePants, only round.”

She also told me they make them holey so they’ll hold a lot of butter, and she wasn’t whistling Dixie. I love that. You can use the holes as an excuse for using too much butter.

When I make them for breakfast, I slather them with butter when they’re hot out of the pan and pile them up on a pretty plate, then either roll them up and eat with my hands, or add maple syrup or jam, and maybe some berries, and eat with a fork.

Either way, ployes make for a delicious breakfast, with a cup of coffee.

OK, so this is the simplest recipe I’ll ever share with you: Get a bag of Bouchard Family Farms ployes mix, add water, and cook on one side in a non-stick or cast-iron pan. The directions are on the bag.

Then slather with butter, and eat. Have some for breakfast tomorrow. Or the next day. Or both. Whatever you do, make a tall pile of them, because I guarantee you’ll want more than just a couple.