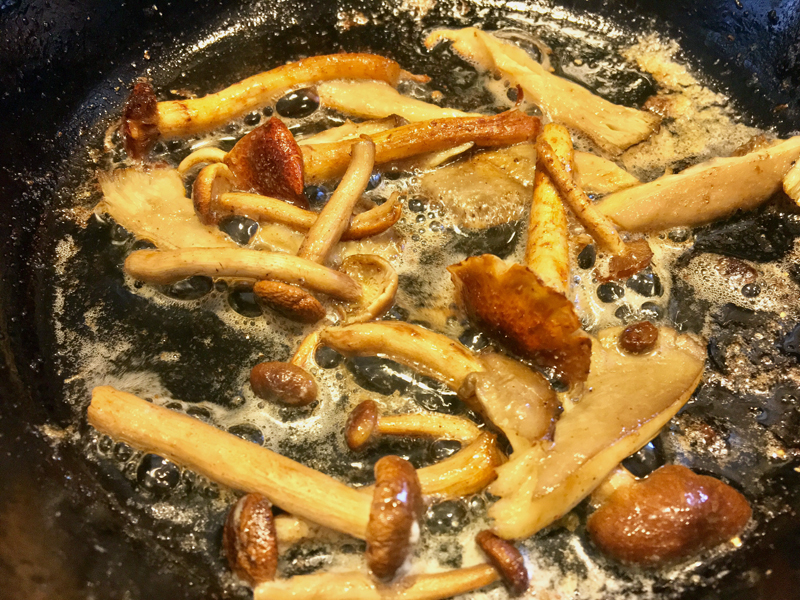 I met a couple last week who are growing mushrooms on Westport Island.

Lisa Jonassen and Lou DiSalvo showed me around their home and their small barn, which they share with two dogs and around 300 bags of mushrooms.

Mushrooms can be described as cockamamie in the sense that they are ridiculous, in a good way: ridiculously delicious.

Seeing how cultivated mushrooms are grown is incredible. If you don’t believe me, Google fungiculture, or growing fungi. Lisa and Lou use bags of sawdust with nutrients mixed in to grow their mushrooms. 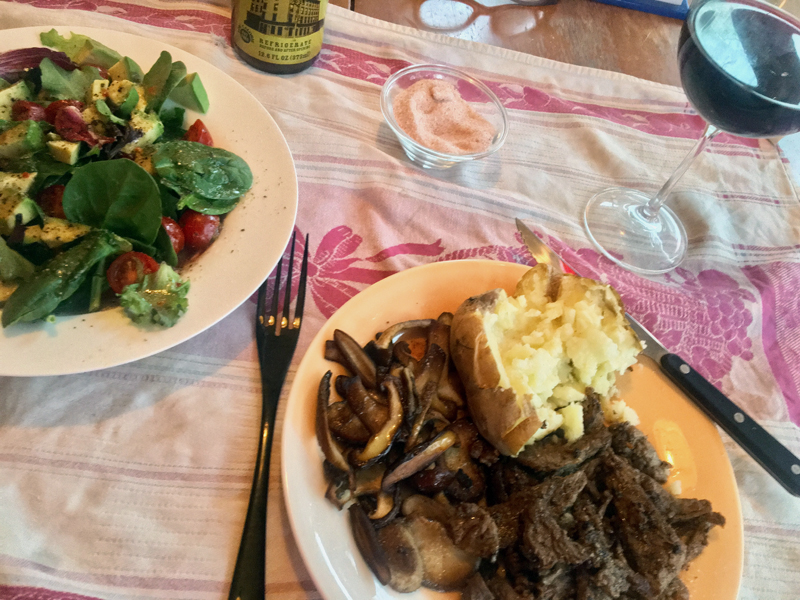 It’s not a walk in the park, or even a walk in the woods, gathering them from dead trees. It’s a whole scientific process that starts with tiny spores that eventually morph into gourmet delicacies.

Mushrooms are fast growers. Lou said he might go out to the barn in the morning to see a few little babies poking their heads out through slits in the bags, and a few hours later they’ll be, like, teenagers. Reminded me of the rock musical, “Little Shop of Horrors,” except mushrooms aren’t anywhere near as scary as the plant that ate people.

The plant, called Audrey II, looked like an overgrown Venus’ flytrap, and it had a propensity for human blood.

If Glenn Chadbourne grew mushrooms, they’d probably be like that plant. 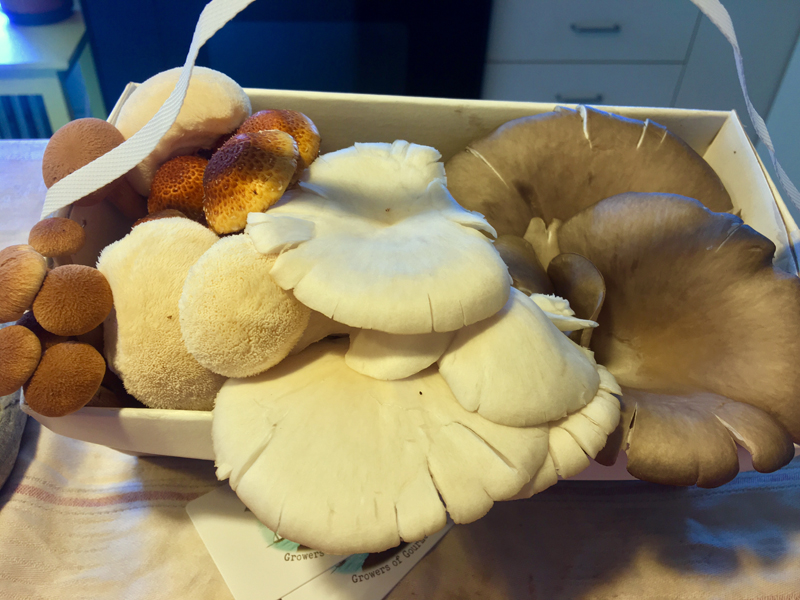 I came away from that little shop of ‘shrooms on Westport Island with a basketful of gourmet delicacies, and a few nights later my friends Marilyn and Walt Gorneau, and Caroline and Jay Canning, and I, met up with Lisa and Lou at Sarah’s in Wiscasset. We all went home with some more.

Lisa had told me she likes to cook her mushrooms simply, in a frying pan with butter, till they turn golden brown and get a tiny crunch at the edges.

I concur. I’m a firm believer in keeping foods with delicate flavors simple. I refuse to bury those elegant flavors beneath a pile of cheese, or anything else that will hide a subtle flavor.

The mushrooms I brought home from Island Mushroom Co. were sublime.

I cooked a few shortly after I arrived home that first day the way Lisa suggested: in a cast-iron pan with butter and a little sprinkling of salt. Period.

There were several different varieties of mushrooms in my basket, including oyster, lion’s mane, pioppino, and chestnut. 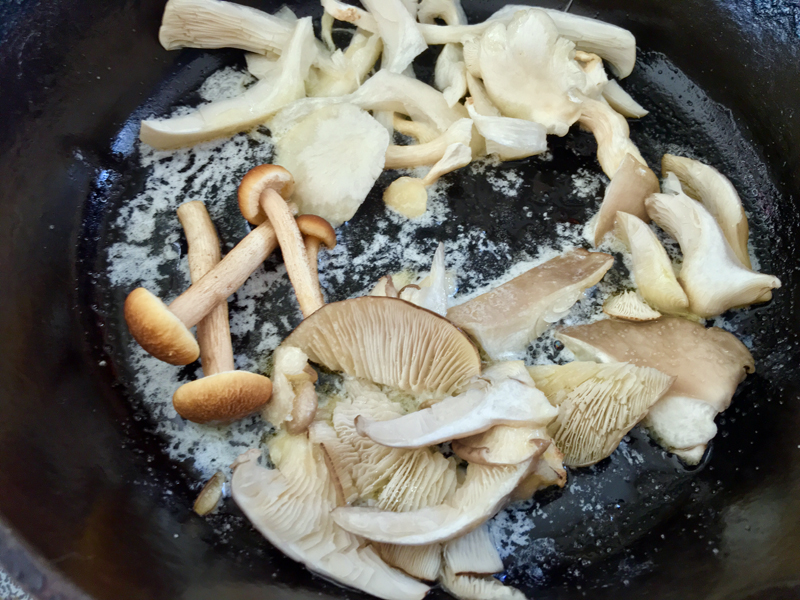 I made a point of keeping the mushrooms separate when I cooked them so I could discern the different flavors. (Suzi Thayer photo)

I made a point of keeping them separate when I cooked them so I could discern the different flavors.

Then, last Saturday night, when my friends and I should have been out whooping it up, we were all in our respective homes cooking mushrooms. Marilyn, Caroline, and I had set our sights on beef to go with our ‘shrooms, and Sue went the vegetarian/noodle route. She had picked up some udon noodles at an Asian market in Portland the day before.

Caroline and Marilyn splurged: Caroline had a rib-eye roast cut at her local butcher’s in Burlington, Vt., and Marilyn picked up a couple stellar rib-eye steaks at Brackett’s Market in Bath.

I got a New York sirloin, but I didn’t have to go to New York to get it. I found one at the Damariscotta Hannaford. 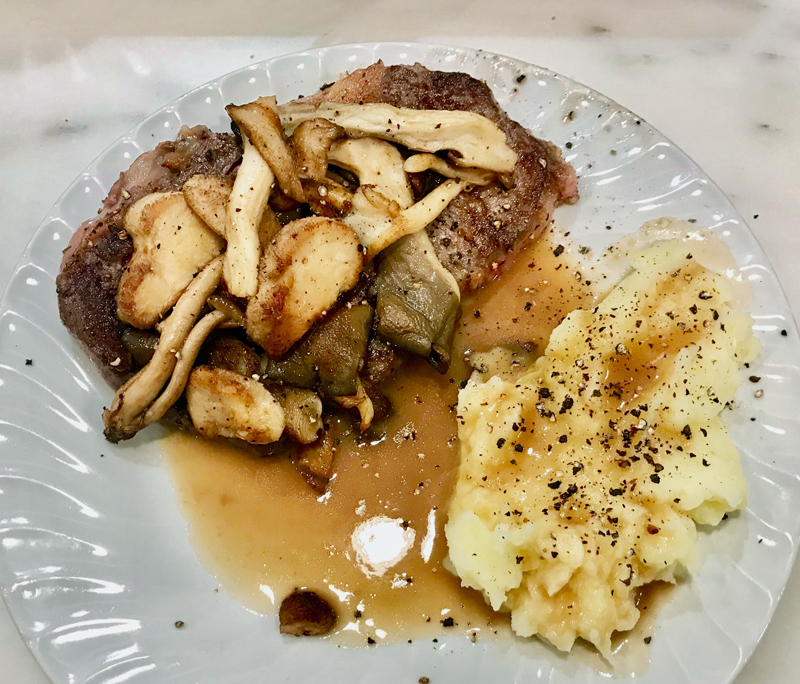 Caroline cut a steak from her rib-eye roast, pan-fried it, and smothered it with mushrooms, pan-fried in butter. (Photo courtesy Caroline Canning)

I tried to convince Caroline to make a Yorkshire pudding to go with her roast, but she didn’t, and that turned out to be a good decision. She was going to prepare an elegant dinner with candles, ironed linen tablecloth and all, for when Jay arrived home from a meeting in Washington, D.C. His flight was delayed and she ended up cutting a steak from the roast for herself and smothering it with some of her mushrooms, pan-fried in butter.

Marilyn, a great cook (who also makes a mean Manhattan), marinated her steaks, grilled them to medium-rare on an indoor smokeless grill, and served them with mushrooms, sauteed in butter, and some famous Peter Luger Steakhouse sauce. That stuff is ridiculous, bordering on cockamamie.

I sliced my thick New York sirloin into strips, quickly pan-fried them, and served them with mushrooms, that’s right, sauteed in butter. I had a baked potato, with butter (duh), and a beautiful salad. I say beautiful not just because it sounds good, but because, as you probably know by now, I’m a stickler for beautiful-looking, as well as -tasting, food. 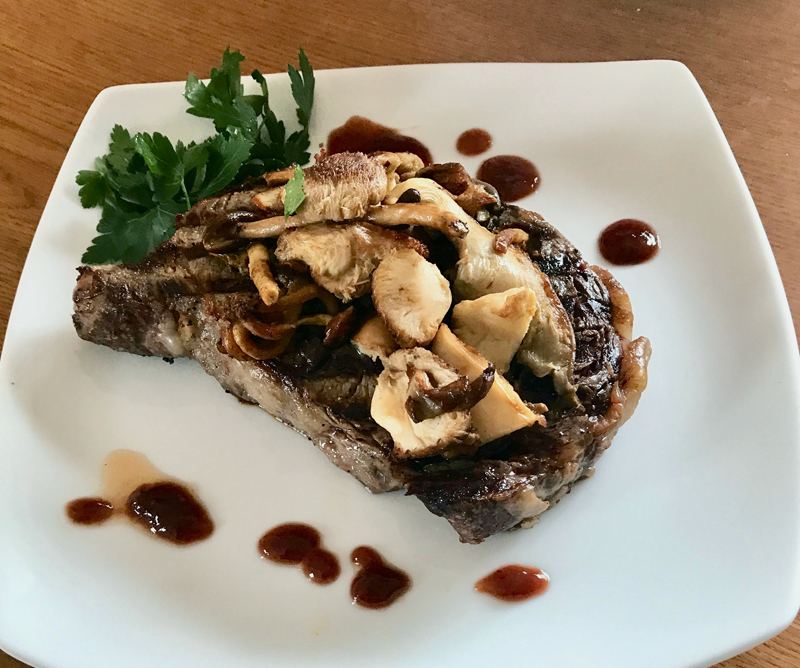 Marilyn marinated her steaks, grilled them to medium-rare, and served them with mushrooms, sauteed in butter, and some famous Peter Luger Steakhouse sauce. (Photo courtesy Marilyn Gorneau)

And, needless to say, I had a Manhattan while prepping dinner, and a glass of halfway decent pinot noir, in an elegant glass, with dinner.

I really got an education about growing mushrooms the day I went to Lisa and Lou’s place. It was an eye-opener. Suffice it to say growing mushrooms isn’t for the lazy or lackadaisical. It’s a pretty time-intensive process, and between their dogs and their mushrooms, I daresay they won’t be taking a cruise around the Mediterranean anytime soon.