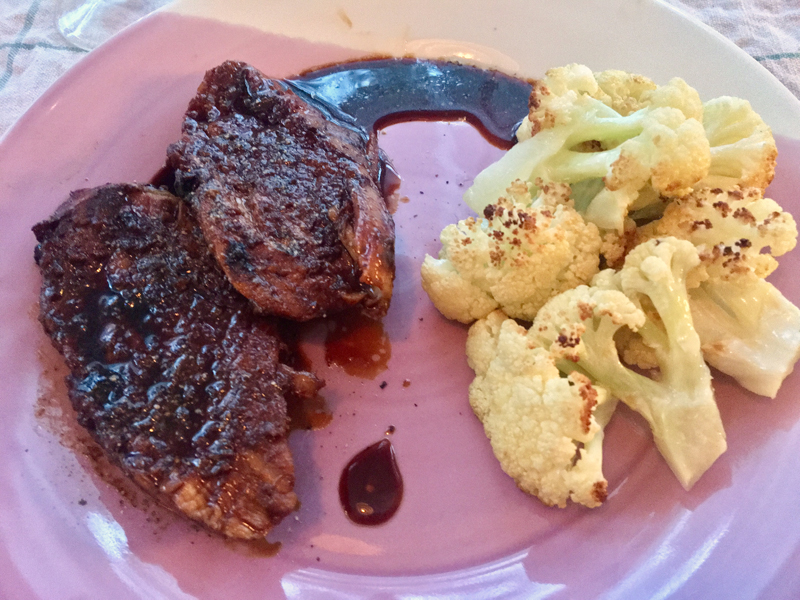 Roasted pork loin with a red currant jelly glaze and roasted cauliflower made for a delicious dinner on a snowy day. (Suzi Thayer photo)

People are complaining all over Facebook, but it really doesn’t bother me. It’s a good day to stay in and write. The most bothersome thing about a snowstorm in April, for me anyway, is the robin that’s sitting in my magnolia tree outside looking up and around as if to say, “Huh?”

By Friday, when my sister arrives from sunny Fort Myers, it will be in the low 50s and sunny, and the snow will be gone. So really. It doesn’t even faze me. If it starts to faze me by 5 p.m., I’ll just make a Manhattan, curl up on the couch with a comforter, and watch “Gossip Girl.”

Because Wendy loves good food, but doesn’t love to cook, I’m planning some stupendous meals for her. I still have some scallops, frozen the day they were scooped off the ocean floor, to pan-fry with browned butter and lemon. She’ll insist on crab rolls, and there’s a guy a couple miles up the road who picks fresh crabmeat whenever he can get crabs from lobstermen.

I’ll make some haddock chowder while she’s here too, with salt pork. Have you heard? Salt pork is good for us now. Just kidding, but really – all those years I didn’t use it, or butter, because they’re terrible for our health? Margarine is now worse than butter, so I figure it’s only a matter of time before we learn that salt pork is good for our hearts.

On her first Saturday night here, we’re going down to Sammy Olson’s in Cushing for lobsters. I’m pretty sure I’ve told you about Sammy. His father, John, who’s 95, has lobstered all his life, and is still going strong. He was featured in Down East magazine last month. He’s kind of a legend, as he should be.

I’ve known Sammy since we were teenagers and I worked at his father’s little restaurant on the wharf in Cushing. Never mind. I’ve told you all this before, and even though it’s a fun story, there’s a limit on how many times I can tell it before you get sick of it, or me.

Anyway, Wendy and I will be going down to Sammy’s for a lobster feed. My aunt Ida and uncle Gary will be there too. Gary, a great cook, will be making bread and an awesome salad, and I’ll take a cake and a bottle of vodka.

My friend, Trisha Moroz, is making the cake. She has a wicked sense of humor and I don’t have a clue what she’ll do with that cake. All she has told me is that it will have a lobster theme, and it will be TALL. Like, REALLY tall. Too tall to fit on a cake plate. I can’t wait to see it. 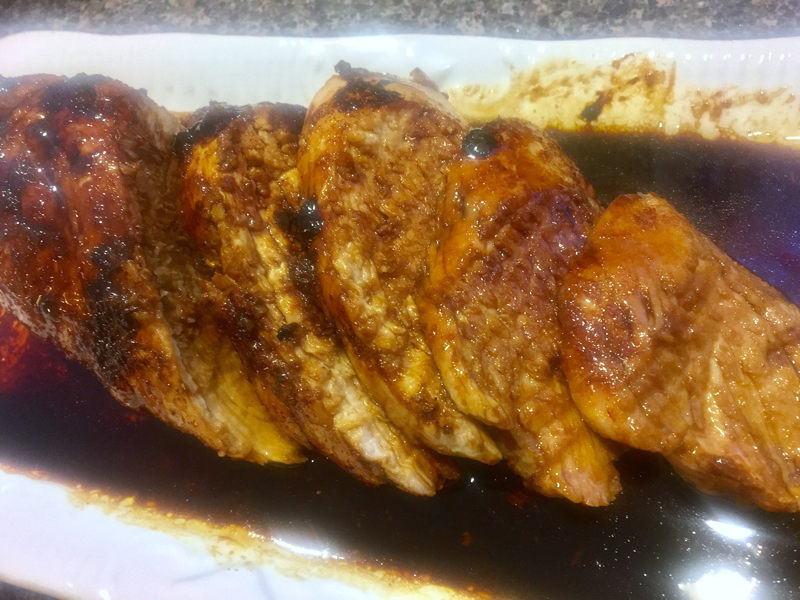 The vodka I’ll be taking is a story in itself, and I promise I’ll tell you about it, whether you want to hear it or not.

OK, so I’ll be treating Wendy to all the seafood she can eat while she’s here. I’ll also be treating her to Manhattans and martinis.

But tonight I’m having roasted pork loin with red currant jelly glaze. It’s not exactly a gourmet recipe that takes an hour to prepare, but it’s good enough to write home, or a column, about.

I love the word “roasted.” Remember when we used to just say roast? It’s funny how words like that change to make foodies feel more sophisticated and worldly. I hate the word “foodie,” for pretty much the same reason. What’s a foodie, really?

Merriam-Webster defines foodie as a person having an avid interest in the latest food fads.

The Washington Post site has an article titled, “Stop calling yourself a ‘foodie,’” by Roberto A. Ferdman.

It features a picture of a student writing, “I will not use the word foodie,” over and over on a chalkboard. It states that the word has been around since around 1980, and for years it was used sparingly.

In late 1984, The New York Times published a piece about “a word we could all do without.” It said that a foodie is “a person who is very, very, very interested in food.”

The Observer got more personal. “Surely you … have those five or so friends whose feeds are 90 percent food-consumption-related?” Insert trepidatious-face emoticon.

My favorite definition of “foodie” came from Urban Dictionary: “A person who enjoys eating food, unlike everyone else, who hates food, thinks it’s disgusting, and would never consider eating it.” It offered this example: “Person #1: ‘I’m a foodie, I love eating food!’ Person #2: ‘Wow, you’re so unique. I hate food and wouldn’t eat it even if I had to to stay alive.’”

So anyway, to be clear, I am not a foodie, but I do love good food.

OK, so here’s one of the simplest, most delicious recipes I’ll share with you. It’s almost as simple as making ployes.

Get a pork loin. Make a Manhattan. Put the pork loin on a baking pan and dribble it with olive oil, and sprinkle with salt and fresh ground pepper. Stick it in the oven at 450 and roast for 20 minutes or so while you sip the Manhattan.

Take it out, turn the oven down to 400, and slather it with red currant jelly. A good one is Cross & Blackwell. Stick back in the oven and roast for another 20 minutes, or until done.

I served it with roasted cauliflower, doused with olive oil, salt, and a sprinkling of garlic powder.