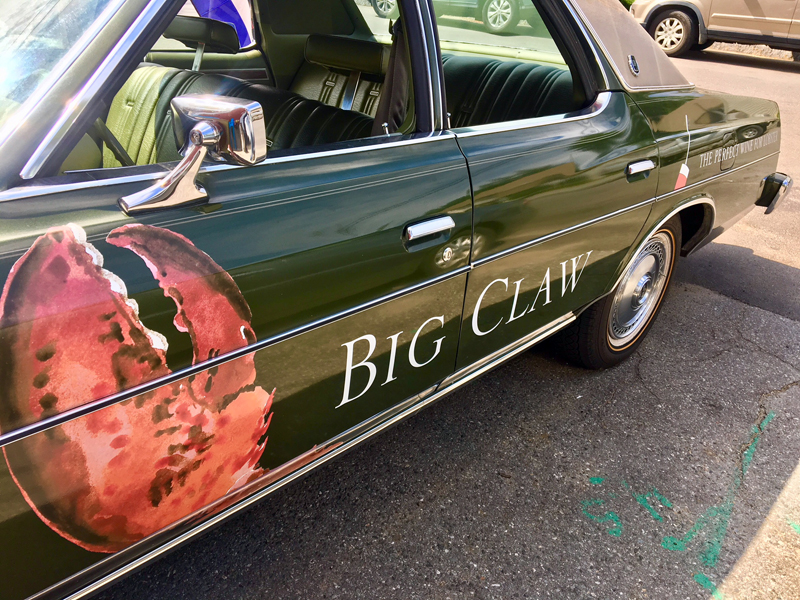 I’ve had my share of lobster so far this summer. Almost.

A lifetime resident of coastal Maine, I’m a lobster lover by nature. You can’t really get through a summer on the coast of Maine without lobster being a constant theme.

My grandfather had lobster traps in the St. George River in Cushing when I was a kid. He owned a company in Thomaston, too, but I always thought he was just a lobsterman 🙂 I used to go out hauling with him. He’d pick me up in his boat that he kept on a mooring at his cottage, a few doors down.

It was fun for a while, until his smashing the crabs that had sneaked into his traps looking for a free meal got to me. I really have a thing about killing anything. Including lobsters. But as I’ve told you, I have no problem eating them when someone else kills them.

Back in those days, lobstermen hated those lobster bait-stealing crabs. My grandfather used to call them unmentionable names before he smashed them on the gunwale of the boat. Now they’re thrown in buckets and sold to very patient people who pick out the crabmeat and sell it for exorbitant, if well-earned, prices.

Either way the poor things die. Of course I love crabmeat. (I am a hypocrite – insert trepidatious emoticon.)

Now that my grandfather is gone, we go down to Sam Olson’s wharf to get our lobsters. Sam’s father, John, still hauls. He’s 95, and he hauls by hand. No noisy hydraulic haulers for him. Sinewy, muscular arms too.

Our neighbors on Bird Point in Cushing, the Wissemanns, have often shared lobster dinners at our cottages. Nancy and John Wissemann are both artists who live in New York during the winters. Their youngest kid, Timmy (you can call him Tim), and his wife, Michelle, own Mariner Beverages, a beer and wine distribution business in Portland.

A few years ago Tim partnered with his friend Steve Melchiskey to produce a wine that would be a perfect accompaniment to lobster. Steve came to Joe Lane Lobsterman in Damariscotta recently to promote Big Claw. It’s hard to miss. Look for a label with a fabulous painting of a lobster claw on it.

Isabella Nelson, part-owner of the restaurant, provided mini, but packed-full, lobster rolls to enjoy with a glass or two of Big Claw. I’ll admit the Big Claw tasted good with the lobster, but I’m one of those people who can drink red wine with white seafood, and white wine with steak. I know there are all kinds of good reasons for pairings, but I’m like the antithesis of a wine snob.

Just give me wine. I don’t care what color it is. Plus I can argue that lobsters are red on the outside, white on the inside. Red and white make pink. Rose is great with lobster. But so is prosecco. And so is pinot noir. Sorry. No I’m not.

So anyway, on July 12, Steve pulled into Joe Lane Lobsterman in his 1975 Ford LTD with a BIG Big Claw logo on the door.

Steve, a wine importer, knows a lot more about wine, and pairing it with food, than I. He has traveled the world’s vineyards and tasted just about every wine from every grape known to woman 🙂 Big Claw isn’t made from a particular grape, but is a combination of several. Each year they come up with a different blend of grapes for their wine.

“We get a bunch of different wines and start blending and tasting them, while we’re eating lobster,” Steve said. “And we find the best combination that tastes good with lobster.” Pretty cool, huh?

The Big Claw that Steve brought to Joe Lane’s was made from five different grapes, all from Spain. I thought it was great, with or without lobster.

Tim and Steve don’t just market their wine. They donate it and a part of their profits to The Lobster Institute, a nonprofit organization.

If you’re too lazy to make one, or you have a problem murdering a lobster, go to Joe Lane Lobsterman, Red’s Eats, or any other place that makes them to go, and pick up a bottle of Big Claw. Go home and pig out while sipping some great wine, and watch a good series on Netflix.

If you have the willpower to hold off eating the lobster rolls while they’re sitting there staring at you, make a Manhattan and relax with that before dinner. It will make the whole experience even more fun, if you can imagine!

By the way, Tim’s mother, Nancy Wissemann Widrig, painted the claw for the label. Nancy is a great painter, and an even greater family friend. So that’s another reason I love Big Claw. I’m kind of prejudiced, but even wine snobs love Big Claw.

The Mariner Beverages website says, “All of the team is enthusiastic about wine and beer as well as the food that best pairs with it.”