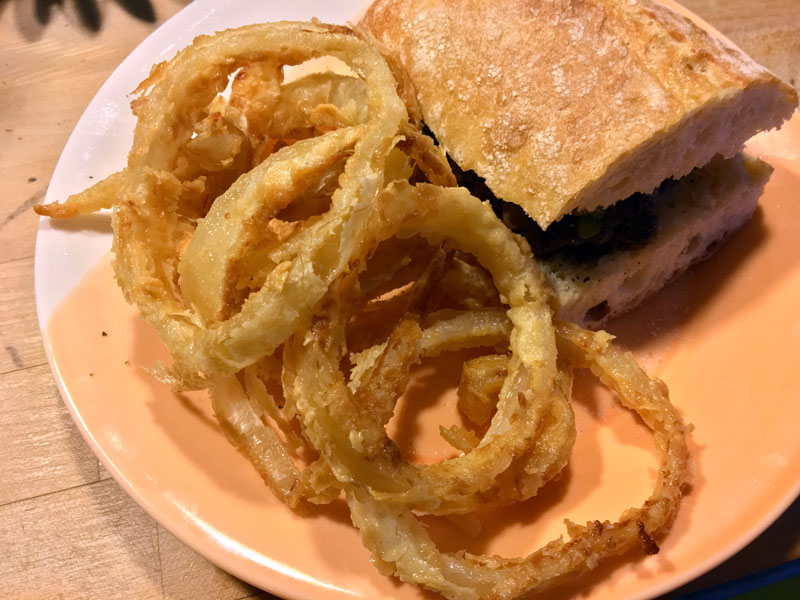 Make some o-rings and a great burger for dinner – tonight! (Suzi Thayer photo)

Unless you’re allergic to some seafoods, I can’t imagine smelling fresh fried clams, or haddock, or scallops, or my old favorite – Maine shrimp – and not giving in to temptation.

Ugh. Maine shrimp. I wish I hadn’t started thinking about THAT. It hasn’t shown up much on menus for five years now, thanks to the dwindling population.

Luckily we can still opt for other fried seafood. Fried haddock or clams with French fries, or good onion rings? Hello.

I make onion rings, and they’re better than most you’ll get in a restaurant. They’re crunchy golden brown on the outside with a light tempura-like coating and a sweet slice of Vidalia onion on the inside. I used to make them in restaurant kitchens, and I’ve perfected the recipe.

Slice Vidalia onions to the perfect thickness for a perfect onion ring, and toss the rings around in a big bowl of flour with a generous pinch of salt thrown in.

In another big bowl, beat a couple eggs with some milk. Throw the rings in and coat them, a few at a time. (Yes, this can take a little time, but if you mix up a Manhattan and take sips of that between throwing the onion rings around, time will fly.)   🙂 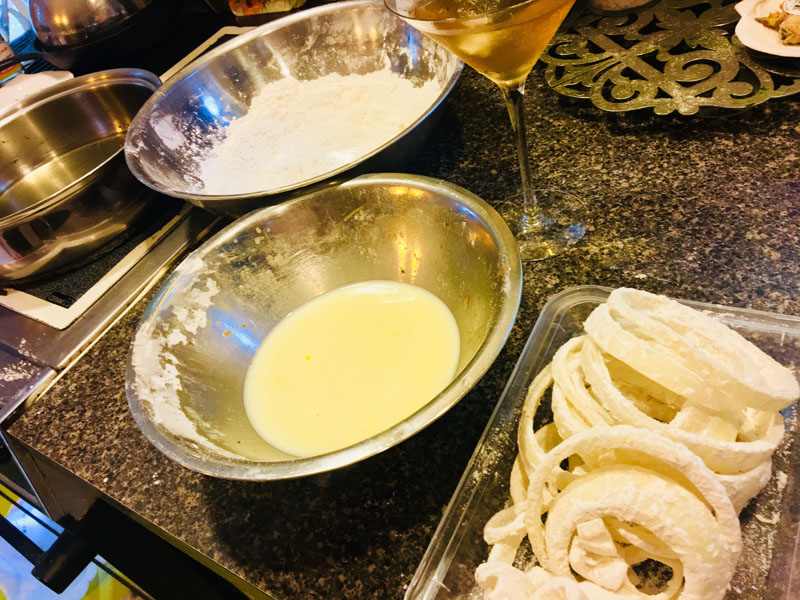 In yet ANOTHER big bowl, mix up a combo of half flour and half cornstarch (I usually use about a half-cup of each – you can always add more) and another big pinch of salt.

Take a generous sip of the Manhattan.

When they’re perfectly golden-brown, throw them on a paper towel-covered platter, have another sip of the Manhattan, and start over.

I’m telling you, they’ll be the best onion rings you’ve ever had. If you serve them to friends or family, you’ll be a hero for the day. And guess what? You can make a big pile of the ridiculously awesome things, and the ones on the bottom will still be crunchy when you get to them. Not that it’ll take you that long.

Just a platter of those babies and a glass of wine, white or red, whatever, would be enough for a mouth-wateringly delectable meal, but it would be more socially acceptable if you had something with the rings. People would be like, “You had a platter of onion rings for dinner???” They wouldn’t get it. 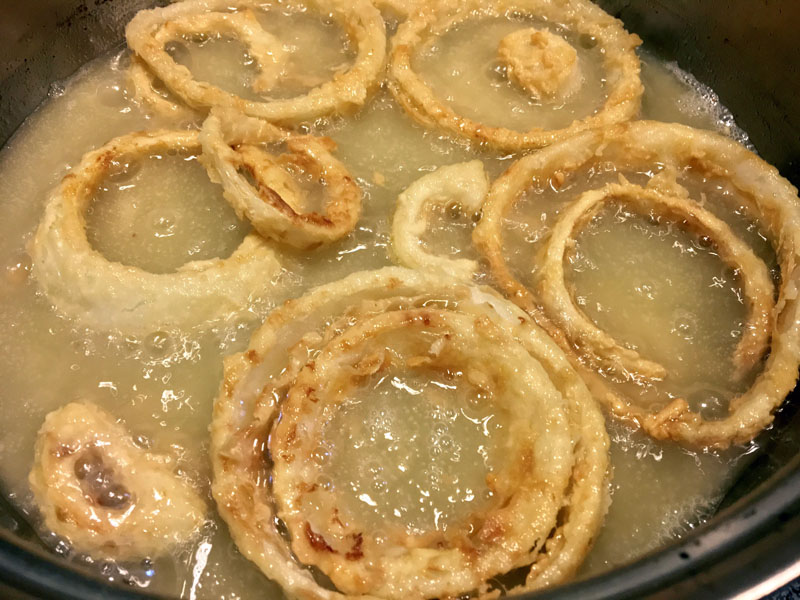 So get some fresh haddock and throw that into the same mixes you used for the rings, and fry that in the same oil. Squeeze a wedge of lemon over it, and maybe have some tartar sauce on the side.

Or make a burger, and throw a salad together. A bowlful of whatever kinds of greens you want – I usually opt for some red leaf and green butter lettuce, maybe some good crunchy romaine, or iceberg (yes, iceberg, shut up) and a handful of arugula, some sweet grape tomatoes and avocado, with Good Seasons Italian dressing (sorry, oil and vinegar purists).

I can’t talk about golden-brown fried stuff without mentioning fried clams. I’ve never attempted to make them. It’s hard to find shucked clams, and they’re really gross when they come in a big can. I know. I worked at a little restaurant in Cushing one summer when I was 16.

It was owned by John and Betty Olson, on their lobster wharf. You know the Andrew Wyeth painting “Christina’s World?” John is Christina’s nephew. Thanks to that painting, there are some misconceptions out there about Christina’s life. The image of her in a field, in a pretty pink dress, is kind of idyllic. But I knew her, and her life was anything but idyllic. 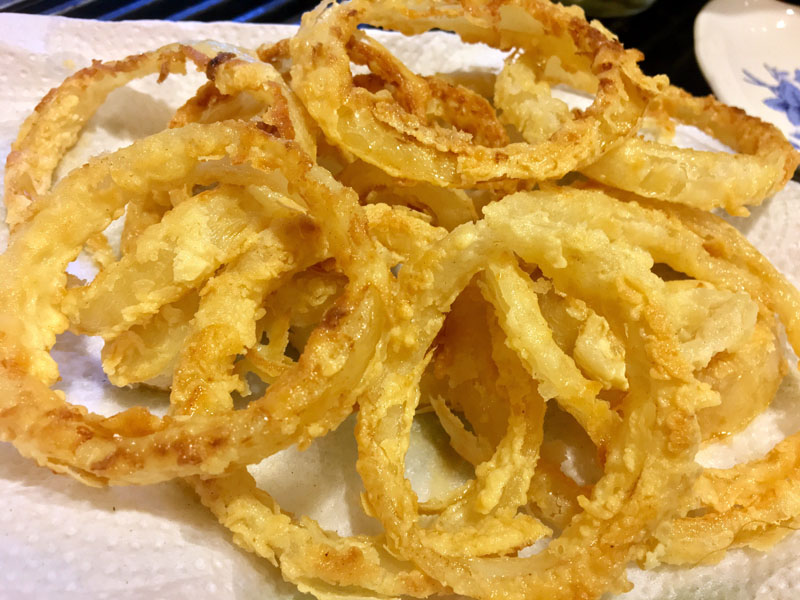 Still crunchy at the bottom of the pile. (Suzi Thayer photo)

Getting back to fried clams, and their grossness before being fried – Betty Olson made them in that restaurant, Our Place.

Betty was a character. There are other words I could use to describe her, but this is a family newspaper. She used to take the clams out of the can and eat them raw. Some of them were as big as her fist. I’m sorry for that image, but it was gross.

She used to throw a few drinks back in that kitchen too. One day Betsy Wyeth brought a friend in for lunch. I waited on them. Betsy was telling her friend about the fried clams. “Best in the world,” she said. Betty was on a roll that day in the kitchen and I was scared to death she’d come out to the dining room and show Betsy the can of raw clams, and maybe eat a couple.

I lucked out. We were out of them. Betsy was disappointed, but I still got a decent tip.

Anyway, I honestly don’t care what you have with the onion rings, or if you have nothing but wine. Just please make some. You’ll thank me.