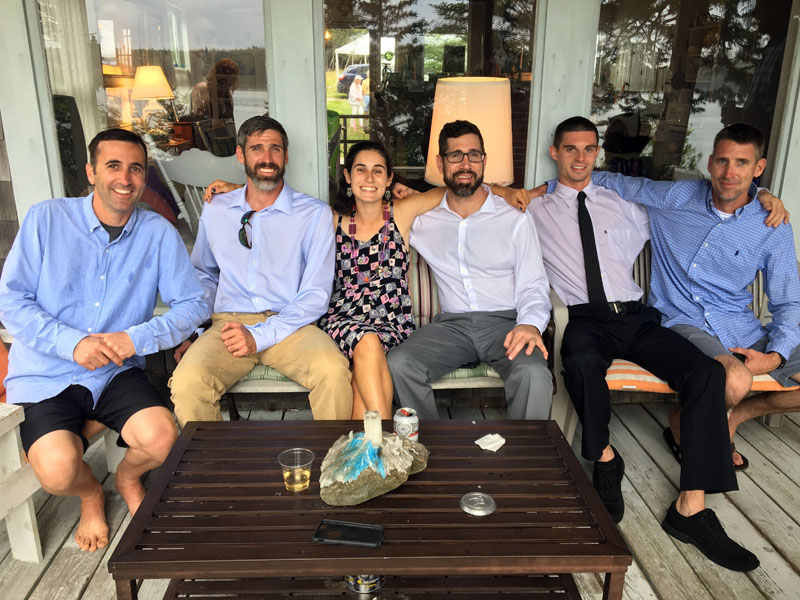 A totally awesome group of Mum’s grandchildren. Only one, Sam, is missing. And he was missed. (Suzi Thayer photo)

So last weekend was kind of an emotional roller-coaster ride. I’ll get to food in a bit, I promise, but as the column head states, this is about life too. And Manhattans, of course.

On Saturday, Aug. 4, my family and close friends celebrated my mother’s life. Mum died on April 11.

The celebration was held at our 100-year-old family cottage on the St. George River in Cushing, where my mother spent summers for 55 years. This is our first summer without her.

Don’t worry, I’m not going to get all maudlin here. This isn’t that kind of column. This column is meant to make you smile, not weep.

There were a few tears that day, but loads of smiles. My mother smiled more than anyone I’ve ever known, and she made those around her smile too.

Around 80 people showed up on the very humid, cloudy, rainy day. Sunshine would have been nice, but when it’s 80-90 degrees and humid, give me clouds. And the damp, gray day and a couple downpours didn’t dampen anyone’s spirits.

Mum’s close friend, Carol Tanner, gave her version of a eulogy while my brother Pete’s friend, Bob Knowles, quietly played guitar. My mother was not a religious person in any sense (we kids attended Sunday school at the Unitarian church in Sanford, and in the winter Mum would be waiting outside with our ski equipment and we headed up to Pleasant Mountain – now Shawnee Peak) and the “eulogy” was more a fun, funny, inspirational story about her life.

Carol spoke of Mum growing up in Thomaston, where her grandfather and great-grandfather built five-masted ships, and of the winters at her and my father’s home at Sugarloaf, where Mum skied and worked in the ski shop, earning the Employee of the Year Award three times. She retired at 81.

Right up till she stopped skiing and working at the ski shop, she lived in her home that sat high atop a ledge with around 24 steps up to the deck. “She was a tough Maine girl in spite of her delicate, elegant appearance,” Carol said. “She could shovel two dozen steps of 12 inches of snow on her stairs leading down from her house, digging out her car before work and sometimes after work, returning home to maybe shovel out again.”

We had a couple large tents set up, with tables and chairs, and people, some of whom we hadn’t seen in way too many years, mingled and reminisced, and ate and drank wine.

If you’re anything like me, you’ll want to know about the food that day. We had sliders with Ralph Smith’s pulled pork from Cod’s Head in Boothbay Harbor. We had sliders with chicken salad made by yours truly. I threw in some dried, sweetened cranberries and Italian salad dressing along with the requisite mayo.

There was coleslaw, potato and pasta salads, and my sister-in-law’s famous Oriental salad, with brown rice, sesame oil, and pea pods. There were some wicked hot grilled chicken wings, thanks to cousin Rich. There were bowlfuls of pickles and watermelon and Bing cherries.

There were baked beans, made with Mum’s recipe by my sister Wendy’s childhood bestie, Lise Roy. Lise also brought the best whoopie pies ever. She makes them with zucchini and walnuts, and a buttercream filling. I’m going to get that recipe for you. They were awesome.

Carol wrapped up her eulogy with references to Mum’s seafaring family:

She was the guiding force for us.

And today, the wind has been knocked out of us.

And although it feels like our sails are flat

And our boats have been left directionless in the water,

In time, we’ll realize that like the wind, she is never truly gone.

But for now, we really miss her.”

Oh man. I miss her so much. Sorry this was so sad. I’ll make up for it – promise.