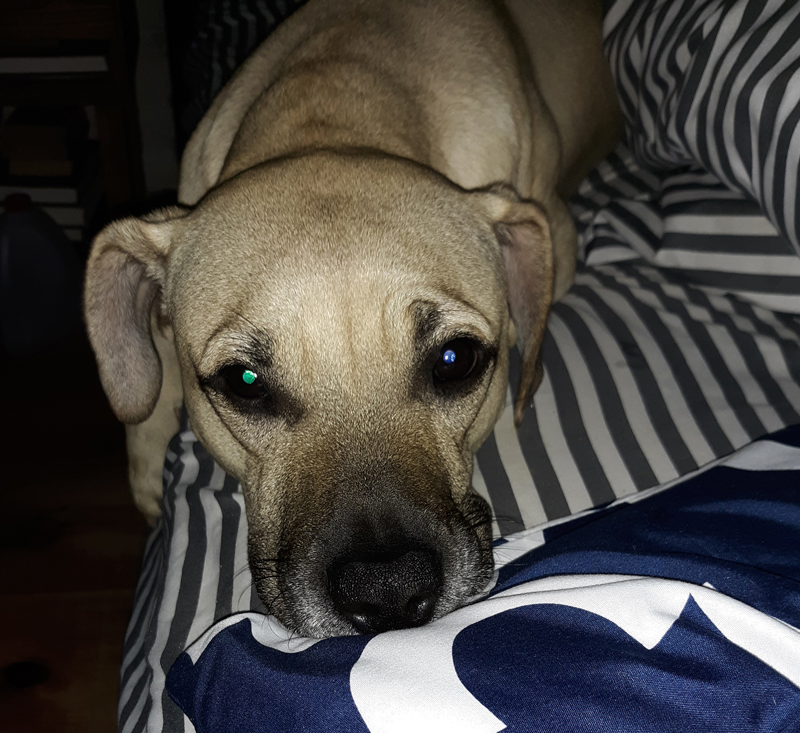 Before I start, I have to say that as soon as mom hit the send button on last month’s column Brody got into a pineapple upside down cake that mom had made. She had it pushed back on the counter, but I guess not far back enough because Brody, aka The Brodster, aka Counter Surfer Extraordinaire, was able to scarf down at least the first half of the top of the upside-down cake, which in itself sounds odd, but I don’t bake, so I can’t really say. It’s a digit thing.

Anyhoo, mom no sooner got the cake away from him when she found him on her bed polishing off the rest of the Vaseline from a jar that he found in the bathroom. I say rest of the jar because I had gotten into the first half. Luckily neither pineapple of Vaseline is toxic to us dogs, but yeesh!

So, off he goes to a trainer. I have been to a (different) trainer myself and it was a pretty okay experience, except for all the treats the trainer gave me, which I threw up all over the parking lot.

That ended that. Mom said this trainer is really good and he said Brody is a smart dog. When mom asked if he thought he was a good dog, he said “he is a great dog!” That made mom very happy. I too am a smart and great dog. She tells me this every day.

Brodes is going to go a few more times. Hopefully his counter surfing prowess will cease, and he will respond when he is called back. Time will tell.

Mom and dad have a lot of family visiting soon and she is hopeful Brodes will be more chilled out by then. He loves people, as do I, but we need to not jump on them. I am trying, but it is difficult. I just get so excited. Mom said the trainer told her that even though we like little kids and babies, it is best when parents ask permission to pet us. I like that they are on my level, and I can kiss their faces, but it is always best to be safe.

Mom is loving this cool weather. Last night it was so windy out. I got a little scared and climbed into bed with her and dad. I love to curl up in the middle and fall asleep. That is the best! Ever wonder why we dogs like so much to sleep with our humans? Well, we look at our humans as our pack. In the wild, wolves, coyotes sleep all together for warmth and safety. We pretty much do the same. Ever notice how we usually are on your leg or up really close? That is so we can keep you safe.

Speaking of wolves, mom went to a cool wolf sanctuary in Ipswich, Mass. a few years ago. She found out some interesting things about them. Wolves are normally shy and steer clear of humans. Some movies show wolves attacking humans, but apparently in the U.S. there have been only two attacks on humans in the last 200 years and they were human error.

Wolves let their elderly and sick feed first and they keep them at the front of the pack with the younger, stronger ones in the back and sides to watch out for predators. That is super amazing. If you ever get to check this out, the sanctuary is called Wolf Hollow.

Speaking of wolves, mom is getting her Halloween guys ready which includes her 6-foot werewolf and a recent 4-foot clown thing that moves and laughs. I wish I knew what he found funny. Yikes, here we go again. This will be Brody’s first Halloween with us and my second.

Mom was super psyched this morning because she heard ravens. They haven’t been around too much. She loves ravens and crows a lot. She talks about her experience when she was studying for her master’s degree at Goddard College in Vermont. She spent one week every six months on campus and then would be home working on her thesis. This went on for three years.

Her very first week there went well for about three days. She said she started to feel overwhelmed and homesick. One of the advisors was an avid birdwatcher. Two mornings a week he led a few students on an early morning bird walk/watch. Mom thought she would go, that it would make her feel better. She said when she was feeling the worst of everything, she quietly hoped for a sign that she had done the right thing in going back to school that had such a rigorous schedule, while working full time, and balancing family obligations. She said it tested all her insecurities.

On the morning of her walk she asked the advisor if he ever saw ravens. They could be heard all around the campus, which apparently was on a farm-like property. The advisor started to say that he had not seen one in several years, and then stopped short, said, “Oh,” and pointed up at a tree.

Looking down right at my mom was the biggest raven. She said he looked to be about the size of her car. She said he was just glorious. She went back to her room and started working on her writing, determined that she would get through this endeavor. She did, and her thesis cover page features an image of a raven on a branch.

I have seen crows in our yard. They are pretty cool, I must say.

Apparently, they can mate. In 1990 a wild American crow and a single raven successfully mated in Toronto, Canada. They built a nest together and had three babies. The babies were large and had a wedge-shaped tail.

A group of ravens is known as an “unkindness” or a “conspiracy,” while a group of crows is called a “murder.”

Crows make a loud “caw” sound; you can’t miss it. Ravens sound like huge bull frogs, croaking all around.

Well, I guess that is it for now. I remain hopeful that Brody will find his way with training. Mom gets him checked out to see where he is with his heartworm status. She and our cool vet Dr. Tichy are working on it. I am glad he is here with us. He is safe and oh so loved, as am I.

If ever you can, please consider donating to your local, or a favorite rescue. Anything is appreciated.

Mom has noticed a lot of people driving with dogs either sitting on their laps or hanging out of windows. Now, I love a good car ride as much as the next guy, but this is unsafe for us. If they need to brake suddenly or get into a fender bender it could be curtains for us. Dog safety harnesses for cars are pretty comfy and easy to use. No one thinks anything bad will happen to them, but you never know. We can’t speak for ourselves.

Remember, even though it is getting cooler, temperatures can still climb in a car. If we can’t go in with you, please leave us home.

Much love and hugs to all.