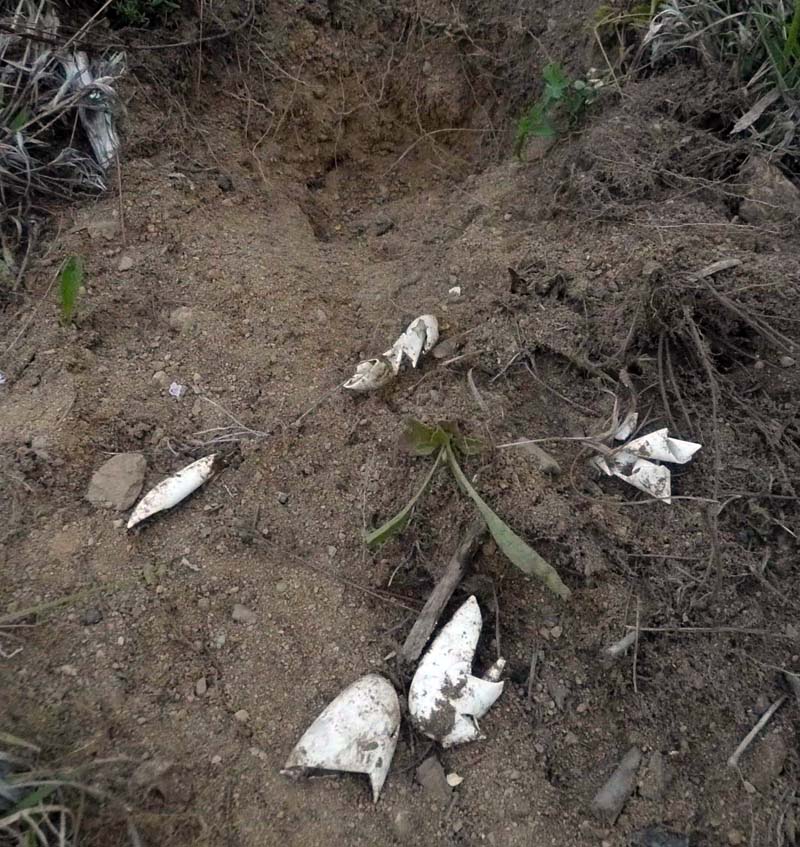 The remains of turtle egg shells are a unique and curious find. (Photo courtesy Nancy Holmes)

People have been keeping track of the changing seasons by naming full moons for eons. Of course, different people in different times had different names. That gives me an excuse to invent some moon names of my own. My “Egg Moon” is just passed, or perhaps a “Wild Baby Moon,” though there are some second broods and late nesting birds still to go. Goldfinches, for example, are strict vegetarians, so they wait for an abundance of seed.

A dead tree close to the clothesline has three round holes. It was hard to locate the ventriloquist-like begging chicks; but by walking back and forth, I could triangulate on the tree with the holes. I’ve been hanging laundry ten feet from that tree for years, but this spring, downy woodpeckers felt safe to raise their brood there. I am flattered! There came a day last week when their trust came undone. They flew around shrieking loudly. Juveniles must have been out fluttering from branch to branch. I was anxious when my offspring climbed into cars and flew off down the road. I hear you, Downies!

By the garden, four tree swallows flew around the bird house. Flying lessons? And as I was just about to start re-roofing the garage, I discovered a robin’s nest on a beam. Two broad, yellow-trimmed beaks stuck over the edge of the nest. I didn’t think the parents would dare feed the chicks with all the ruckus overhead, so the work was postponed. A week later, two spotted fledglings fussed around in the bushes. Back to the roof work!

But two phoebes flew around the other doorway, scolding in high chirps. I dragged a ladder in and climbed up to peek. Tiny nestlings. For the two weeks or more it would take them to fledge, we must wait again for the roof. And the robin pair was building a new nest in the other end of the building—a new nest every day, as I knocked down their work. I called to them that robins have been known to nest in apple trees! As long as they have plans (meaning hormones), there will be nest building and singing.

Half a mile back in the woods, I toured the log yard, a clearing where loggers sort logs to be loaded onto trucks. When the yard isn’t in human service, nature uses it for whatever likes a flat, dry, sunny area. The gorgeous red and orange wood lily often blossoms there. Maybe because hard, dry soil discourages competition?

Maybe it was too dry for lilies this year, but there was a lovely painted turtle lying in the sun. Legs and head were drawn in, but when I lightly touched the shell, she jerked her head so far into her neck folds that only her nostrils and the tip of her nose showed. I’m just calling it “her” because the males stay safe and comfortable in the beaver pond, while females scuffle ashore to lay eggs. Should I carry her back to the swamp, 200 feet away? Would she have to turn right around and plod back to the log yard? Is she alright in the sun? My usual decision about whether or not to interfere is to leave it to nature. It was a tough call, but I left her in the sun.

I took three steps and came upon the remains of a turtle egg nest. Small, white, curled shell fragments lay on a fresh mound of earth beside a hole: turtle egg shells, the remains of a skunk or racoon’s dinner. Don’t jump to conclusions! Turtles don’t stay around to guard their eggs. Were they snapping turtle eggs? Then why was she nearby? If they were her eggs, was she unable for some reason to leave? But she pulled in her head so vigorously … I sat beside her for a while, then walked away.

My friend Linda emailed me:

“I saw a duck and nine ducklings trying to cross East Pond Road with traffic flying by. The wind from one demon driver probably saved their lives on their first attempt to cross. It blew the babies back off the road.

I stopped, turned on the blinkers, and waited, as I didn’t want to get too close and scare them back into the bushes. In a few traffic-free seconds, they made it across safely. Why the ‘blankety blank’ do people have to drive so fast?”