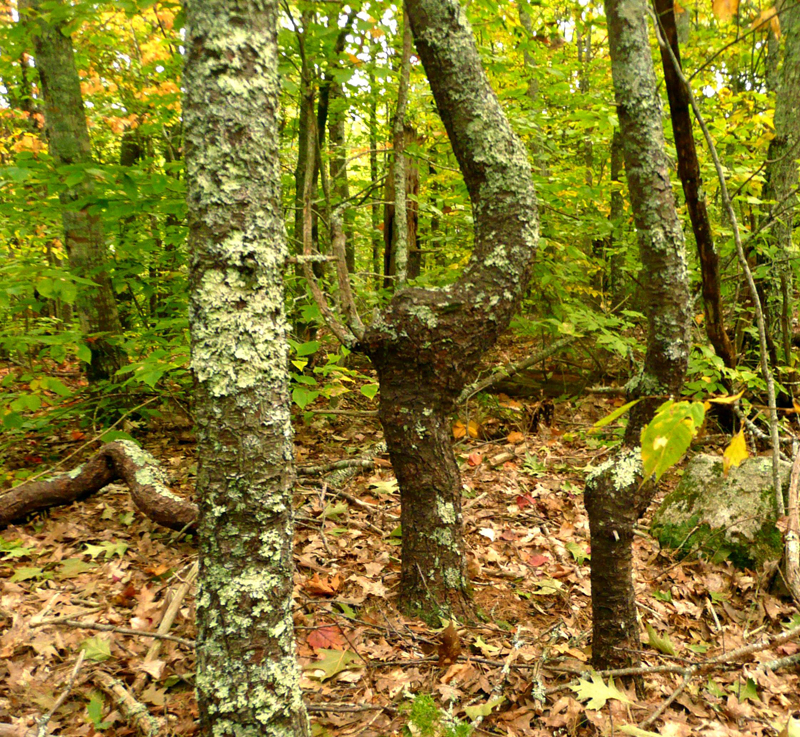 There’s a little grove of conifers on the West Branch Preserve in Jefferson that some years ago grew vertically for 2 or 3 feet. Then these trees got bent over by something before growing up toward the sky again.

The late interpretative naturalist extraordinaire Joe Gray led a group through the grove. His trained forester’s eye scanned the grove long enough that stragglers gathered to see what he was looking at. A lively discussion was punctuated with questions for Joe. His response: “What do you think?”

When I had a moment out of hearing of other walkers, I asked him why he didn’t tell us. He answered that if he had spoken his theory, we would have all been satisfied and stopped thinking about it. I, for one, am still unsure 15 years later!

Thank you, Joe, for that and countless other seeds of nature exploration. So I pass on to you this recent photo. Since you’re not seeing the whole area, I’ll tell you that it’s the only small grove of uniformly bent trees I’ve seen anywhere. What do you think? I have a theory, but I ain’t tellin’.

You can go and see for yourself at West Branch Preserve, off Mountain Road in Jefferson. A map is available at midcoastconservancy.org or at the Midcoast Conservancy office on Route 1 in Edgecomb.

On Mountain Road, out of Jefferson village, park at the top of the hill on the left, where a cabled road goes on up the “mountain.” Cross the road and walk to the back of the field, then follow signs. Don’t turn right to pitch down toward the rocky brook (unless you are up for a long, steep, very rewarding hike to the beautiful stream). Stay on the level, cross the power line, and watch for the group of crooked trees on your right.

A huge thank you to Caroline Gray, Joe’s widow, for a staggering phone call after his death. She offered me a pile of notebooks containing copies of his nature columns in The Lincoln County News, Maine Audubon, and other publications, as well as a wealth of other informative literature. I was fighting back tears as she loaded totes with the notebooks and some of the books that took up one wall of his study. Of course, I was not the only local naturalist so honored, and I already had many of the titles, but the additions to my library are valued, not just for themselves, but to remember Joe, tramping along on his thick old legs, followed by a bevy of people eager for his knowledge and insights.

His boyhood was filled with outdoor experiences, like the time he and a friend decided to become trappers. Their first set was successful: a skunk. Miraculously, they avoided being sprayed — until they released the full contents of the stink gland on themselves while skinning their catch. They sold the reeking pelt, returned the borrowed trap, and agreed (with their mother) to abandon their careers as trappers.

Joe earned his forester’s degree from Penn State in 1948, after a four-year interruption to serve in active duty in the U.S. Army. The same year, he and Carolyn Wilhelm started their 69-year marriage, and parenthood of three children. His working life consisted of forestry and surveying jobs for several different companies. In 1979, he retired — from salary work — to a full-time workload of volunteer nature-oriented teaching, organizational work, and writing. He continued his own education through numerous courses and workshops, in addition to all his time afield.

I was lucky to enjoy, in addition to field trips, some of his slideshows and lectures. I particularly remember a much-needed workshop in identifying winter woody species and, in snowy, cold late winter, a slideshow with bright bird pictures and song recordings.

One of his more dramatic accomplishments was with the Audubon Adventures program for youth ages 5-10. He placed this program in 100 schoolrooms, involving nearly 2,000 youth. At the end of “Nature Embraced,” he wrote that “there is one single regret bothering me. That is, I am now unable to continue to pass significant natural history information along to the next generation … (to promote) … knowledge and appreciation of the natural world.”

Oh no, Joe! Your enthusiasm and knowledge will continue to pass down through the generations. Thank you!