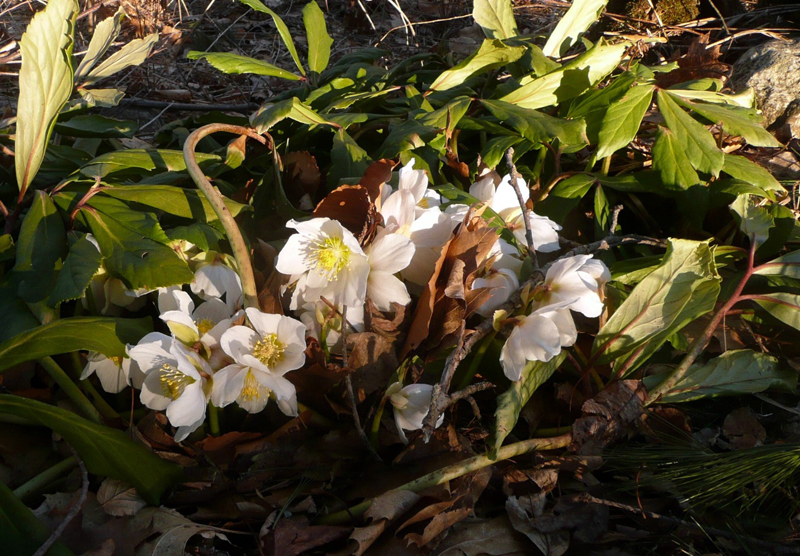 White hellebore in March. Hellebore plants take care of themselves, if you can find a moist, shady place without too much competition. You might want to pull a weed or two once in a while. Sometimes I brush away the snow to find the crystal-white petals and gold stamens. (Photo courtesy Nancy Holmes)

Brilliant sun on yesterday’s snow. The first songbird I’ve heard this year, a cardinal, sang its full, varied song this morning near Glidden Street in Newcastle. Two days ago, before the snow, I heard a few rather soft and tentative “Cheer? Cheer?” whistles. Maybe the same bird, hormones boosted by the light? Last year I noted the first song March 18. I think spring was late and cold last year.

I’m living in a lovely little apartment in town while my house is being worked on. I provide suet and seed at the home place, but I’m not there in the morning when the birds get up and have breakfast. I wonder if three or four miles from the farmland, and houses close together nearer the ocean make a noticeable difference in temperature. Over the last 10 years or so, I recorded cardinal songs consistently between mid-February and mid-March just north of Damariscotta Mills. It would take a bigger sample than one inconsistent listener to make any evidence of global warming!

A week or more ago I saw a huge flock of winter robins on the Round Top fields in Damariscotta. They subsist on berries and frozen apples, with the occasional insect to add protein. They will drift northward as the weather warms.

When the migrant males come to claim their home territories, they are really black and orange. They and the woodcocks arrive when a few places are thawed, offering hunting ground for earthworms. If it snows or freezes hard, they have to find berries or retrace their flights to find soft ground. Robins start singing soon after arrival to mark out the territory. They have a special, rather tuneful “Pip-pip,” that I have learned is often the introduction to a regular song. After a couple of days of warm-up “pip-pip,” they turn on the full power. “Pip-pip! My territory! Come hens! Cheer-a-lee!”

The deer have gone farther back in the woods, leaving the young apple trees alone – for now! Thick evergreen trees overhead keep deer warmer than they would be under the bare limbs of deciduous trees, or the open skies of the orchard. Heat radiating from earth and from the deer themselves is trapped by the evergreen roof. Deep snow slows does heavy with fawns, small late-born yearlings and old or sick or injured adults, giving coyotes rare chances for winter feasting. People familiar with coyotes say they are always hungry. 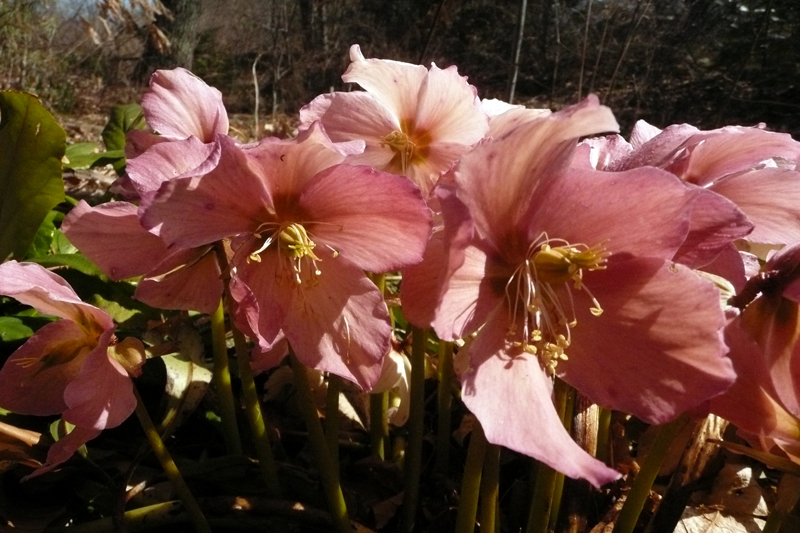 Deer-coyote ecology is different here than inland; but many hunters hate coyotes whether they eat lots of deer, or just the ones that should be culled. Northern deer get thin and weak at the extreme limit of their livable habitat. Our Midcoast deer don’t have to crowd into yards except for short periods of heavy snow. Global warming makes winter easier for them – and shifts coyote diets toward smaller prey.

Most red foxes have already paired up. Although they are mostly solitary during the rest of the year, the same couples re-unite in February and March, and the cubs are born about 50 days later. I sometimes see a fox in early spring, carrying rodents to his mate and cubs. Be warned: poultry is in high demand as the pups grow.

Maine has three true mammalian hibernators: bats, meadow jumping mice, and woodchucks. They just sign off and curl up for the duration. Breath, heart rate, and body temperature drop dramatically. The torpor slows use of nutrients stored in their fat bodies in the fall. One of these warm days, a lean, hungry woodchuck will come out of the burrow to look for green grass. The cold-blooded vertebrates: amphibians and reptiles, also hibernate. Many of Maine’s mammals, like deer, mice, snowshoe hares and mammalian predators are active all winter.

Others, semi-hibernators, are able to slow their metabolisms and activity to some extent. On a warm day in mid-winter, chipmunks may wake and pop up to see what’s going on. They wake when they are hungry and visit the storeroom. They store enough food to keep themselves fed underground all winter if their stores are not robbed or frozen. A few nights ago, I thought I smelled a skunk out looking for something edible. Raccoon tracks appear on the snow after a warm night, too.

I have seen flying squirrels piled together in a warm ball in a leaf-lined nest. Do other squirrels do that, too? Can they lower their metabolism? I bet someone has done that research. Look it up.

Animals able to slow their metabolism and body temperature include at least some birds. Likely many species have not been tested. I first heard that news about chickadees. When they arouse and come to a feeder on a bitter morning, they are double-size balls of fluff.

By mid-March, the migrant birds start to show up. People crow, “I saw a woodcock today!” And a flock of redwing blackbirds wakes up the frozen marsh with their joyous “Woop-er-deee” call. It’s spring! It may snow again, but it’ll melt by itself – well, maybe in a few days. If it doesn’t turn to ice.

And you know it will snow in April, too.