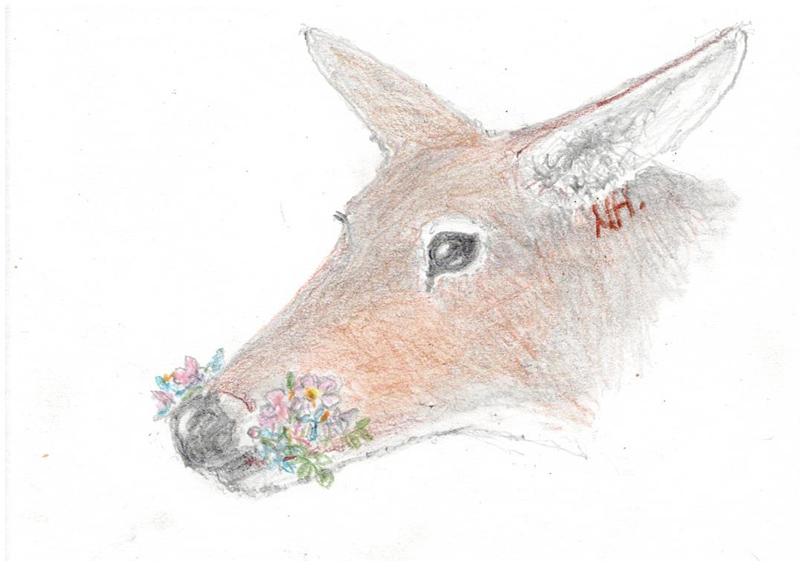 There is a place near my house where does often hide their fawns. (No, you can’t hunt there – it’s too close to houses.) When a doe with hollow flanks and a bulging udder hangs around that area, we suspect that she has a fawn hidden nearby. When a doe vacates the nursery, does one of her daughters return to the same area? Do they make that choice because there are fewer predators close to human habitat? No guarantee. One spring my son and I heard what sounded to me like a catbird’s “meow” call. But my son said, “A catbird on steroids!” He didn’t say “fawn,” but when he said sadly, “Oh well, predators have to eat, too.” I just nodded.

Three times over the years I’ve seen a doe lead her little ones back to the big woods. Actually, this year, a fawn seemed to lead the doe. The doe has been around often, morning and evening, suggesting that she may be the one who has enraged the neighbor who has planted delicious, young fruit trees. The deer seems more offended than scared when humans drive her away. Her ancestors browsed there time out of mind. Why shouldn’t the sweet, tender trees be her dinner?

One recent morning below my house, the doe was enjoying wild pink roses, one bunch of flowers sticking out of each side of her mouth. Something moved fast in the bushes behind her – bigger than a bird – a fawn? It burst out into the field, all legs and ears and tail, running, jumping, scampering back to mom.

My supper got cold while I watched the little sprite dance for 20 minutes. It couldn’t have been much taller than a foot or so, but it ran through and over the tall grass with amazing speed. As the light faded, the doe browsed slowly toward the house until the fawn made a dash to the forsythia bush and disappeared behind a low embankment. The doe munched her way down to the brook. Ripples shone in the dark as she drank, and then she melted into the alders.

In the morning, the doe seemed to share my belief the fawn was bedded under the forsythia. She stood at the marsh edge looking at the bush, then lay down in the long grass, watching. Twice, in quick succession, she raised her muzzle toward the forsythia. I think she was calling softly to the fawn. After a couple of minutes, she stood up and slowly grazed toward the bush; but then she kept going, out of sight behind trees. We were both wrong. Her baby was not under the forsythia!

I went from window to window to see her reappear in the field, but she didn’t. She must have been nursing the fawn out of my sight. I had to move on with my day, but, based on the other sightings, I thought the pair might have gone to the big woods.

Apparently I was right. That evening a buck the doe had chased away earlier followed the way the doe had gone: by the marsh, up to the forsythia and on into the field.

I thought that was the end of the story; but the next noon, in bright sun, a doe followed the route to the forsythia bush and out of sight behind the bushes. She reappeared quickly, cutting back across the field to the safety of trees. Was she the doe that Mom had chased away a week or more ago? Or was it Mom looking for the fawn? Please, no!

I pulled my socks up to deter ticks, and walked the route myself, hoping hard not to find a little body or signs of a struggle. All I found was a maze of tracks through the long grass and many, many deer beds: circles of packed down grass. I saw two fawn-sized beds.

Last evening and this morning, no deer in sight. I imagine the little family with other deer nearby to help detect predators. Maybe the fawn has found another little one to dance with.