A milk snake warms itself in the sun, on a cellar doorstep. (Photo courtesy Joanie Dean)

We opened the cellar door, and there, stretched all the way across the doorstep, and then some, lay a beautiful, spotted milk snake, enjoying a last sunbath. It had a row of big cocoa-brown spots exquisitely edged in black, on a creamy tan background. It may have really needed the sun’s warmth to activate its cold-blooded muscles for the last imperative of the year.

It must get into its winter quarters against the house foundation. There, its thermostat can safely turn down until it rests, barely alive, until spring warmth rouses it. Milk snakes are quite faithful to their habitual hibernating place; and they may not survive the winter if they can’t get to their usual shelter.

Milk snakes have never been reliably witnessed milking a cow, but they do enjoy barns for hunting mice. Hard to believe that tiny head and slender neck could swallow a big, fat mouse,  but their jaws unhinge to accommodate the mighty meal. Different varieties and/or subspecies, and different ages of milk snakes – vary considerably in color. Young snakes are quite reddish, but as they age, they become brown, grey and tan, like my long, lean neighbor.

The genus name is Lampropeltis triangulum. Lampropeltis, is a Greek word meaning shiny shields. The smooth, colored scales decorate and protect the snake. The species name, triangulum, refers to the Y or V shaped dark marking on the head.

In Maine, where there are no poisonous snakes, that mark is not important for humans; but further south, the very poisonous coral snake lacks the identifying V. Young milk snakes may be banded red, yellow, and black like the coral snake, but the bands are in a different order.

Where both species live, a rhyme helps people remember which snake to avoid. “Red touches yellow, kills a fellow. Red touches black, venom lack.” By mimicking the coral snake’s colors, or noisily shaking its tail in dry leaves to imitate a rattlesnake, milk snakes use what’s called “Batsian mimicry.” The harmless milk snake may scare off predators because it looks and sounds like a poisonous snake. This works backwards sometimes, as humans may kill harmless milk snakes, thinking they are poisonous. 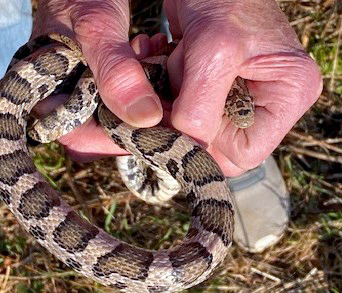 This milk snake tried to escape by backing through my hand. (Photo courtesy Joanie Dean)

A couple of children walking in my woods, saw a long snake with a row of big spots along its back and excitedly reported that they saw a rattlesnake.

I claim not to be afraid of snakes. I have caught and handled dozens, and kept some for a while to observe and admire them. However, my difficulty catching and holding a snake gives me the lie. Frustratingly, when I close my hand on a snake and feel its powerful muscles tense, my hand often opens involuntarily. I have the same reaction to those big, fat harmless tomato horn worms.

The beautiful brown and cream snake was no exception. I sneaked my hand toward it, carefully avoiding casting a shadow, then a quick grab, right behind the head, but as usual, when I felt that startling surge of strength, my hand let go. The snake wandered off, apparently not much disturbed.

My second try worked, and I quickly supported loops of the long snake. Milk snakes are constrictors: they wrap themselves tightly around their prey. I expected this snake to wind around my wrist like other constrictors I have caught, but it hung quietly from my supporting hands. The front third of its body was tapered toward the small, slender head, and those lovely, bright scales were so smooth.

Without squeezing it so tightly that I risked hurting it, I was absolutely unable to keep it from slowly backing out of my grasp. Each time its nose started to disappear into my fist, I had to get a new firm but gentle grip. After it had been admired and photographed, I released it away from where we were working. With calm resolve, it came back toward the doorway and slowly wound into an opening among the rocks of the foundation embankment until the slender tail disappeared.

Wishing you happy, mousy dreams, Beauty, and may you wake safe in the spring.