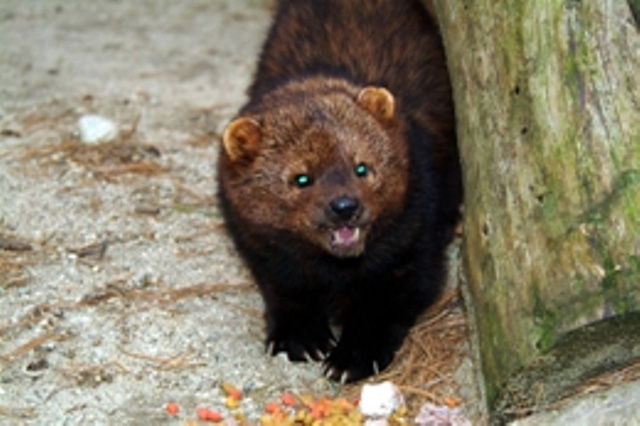 As I drove around the south end of Damariscotta Lake in Newcastle one mid-morning in August, a fisher bounced across the road from the lake, up the bank, and into the woods. I had glimpsed a live fisher only once before, dimly in my headlights: a black weasel-shaped animal, too big to be a mink.  I saw a dead one that was smaller – dark, dark brown with black legs.  But what luck to see a live one in daylight! As it leaped up the bank into the woods, I saw its mahogany-brown back. Oh no! It was supposed to be dark brown. Was it just a house cat?

I wanted so much to have a good look at a fisher, and as it bounded across the road it didn’t occur to me that it was anything else. But maybe it was just a big kitty in a hurry. Normally, this large weasel relative would be hunting in deep woods, not out on a marsh in bright daylight. Maybe it was absorbed in hunting muskrats and lost track of time. Muskrats, not fish.  Fishers clean up carrion, but are not known to fish.

Since I’m nosy about my wild neighbors, I went to the books and the internet. The average cat weighs – what? – around 10 pounds?  Fishers weigh 4-13 pounds, and females are much smaller than males. They are dark brown, often grizzled around the head and scruff. On the other hand, I see in “Mammals of the Eastern United States,” by John O. Whitaker and William J. Hamilton, that they “can appear mottled when they are shedding.” It wasn’t mottled. It was beautifully shaded black to dark brown to mahogany.  What did I see?

Even though we so seldom see fishers, their tracks in the snow give them away. They are credited with controlling porcupine populations, but they don’t kill many porcupines. Not an easy job! One porcupine will feed a fisher for a week, so apparently it’s worth the time and danger. How do they get around those fatal quills? Sometimes they don’t. Fishers have been found who died a slow death from quills.

But it’s a hard death for the “porky,” too. The fisher dashes in to bite the rodent’s unprotected face and leaps back as the porcupine spins and swats with its tail. Determination is a weasel trait: the fisher keeps slashing and dodging. When it’s finally over, the fisher opens the porcupine’s furry belly, rolling back the dangerous skin. I once found a skin completely inside out, all bones and meat gone.

Hold the presses! While I was looking for a photo to go with this column, I found several pictures of fishers just the color of my mystery animal.  So it was a fisher! I thought so. I have been gifted!

My chances were better than average in this habitat where marsh, water, and many acres of woods come together. Over the years, on this short bit of Route 215 at the south end of the lake, I have seen deer, a raccoon with three kits, a mink, a mallard with several ducklings, woodchucks, a young eagle barely missed by a car as it struggled for altitude, muskrats, painted turtles, and lots of snapping turtles out for a walk or laying eggs. On the water or ice, add many species of birds, a coyote, and an otter with two playful young.

Take a drive on the wild side – that eighth of a mile around the lake edge.  Slowly, please – and look around.  There’s a small parking area by the lake to have a good visit in this special place.

(Nancy Holmes prowled Linekin Neck in Boothbay as a child, then an Illinois bottomland while earning a master’s degree in wildlife management.  Once back in Maine, she raised children and kept assorted animals, wild and domestic. She and her Carolina Dog roam their woods in Newcastle.)