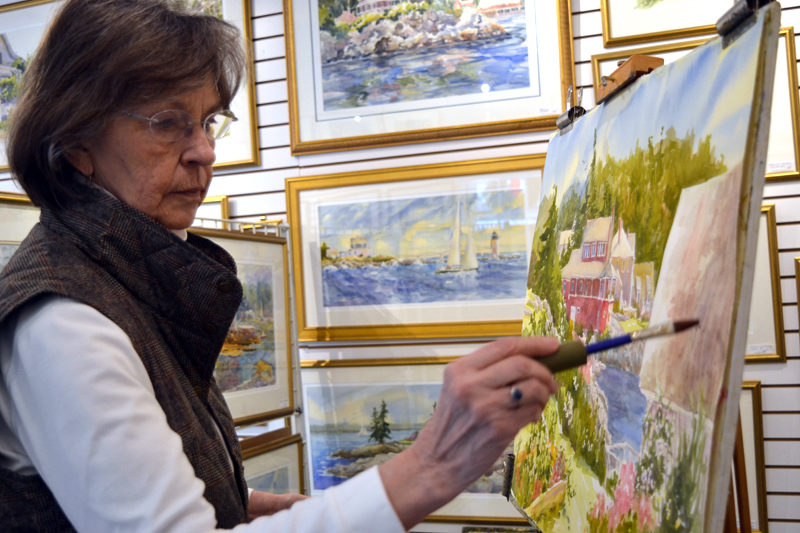 Damariscotta painter Jan Kilburn at work on a watercolor painting in her Bristol Road studio that doubles as an art gallery. (Christine LaPado-Breglia photo)

World of watercolor: I recently had the pleasure of spending time with Damariscotta painter Jan Kilburn, whose eponymously named gallery is part of the four Bristol Road Galleries. Kilburn’s gallery, which is attached to the front of her house, is a well-lit space that is loaded with Kilburn’s lovely watercolor paintings, giclees, and prints of mostly Midcoast landscapes, many of those Monhegan Island scenes. It is the same space in which Kilburn teaches Monday-morning painting classes from 9 a.m. to noon.

“They come every Monday and we all paint the same thing, but you wouldn’t know it because (the paintings) are all so different,” Kilburn said of her Monday-morning students, many of whom are regular attendees at the class. “We all learn from each other doing that. … I learn to paint by watching other people paint, so I paint along with them.”

Kilburn speaks humbly of her painting skills, which are considerable, and even more impressive considering that she is largely self-taught. She gives credit to the late local artist Judi Wagner, to Boothbay Harbor’s Tony van Hasselt, and to New Hampshire artist Doris Rice for basically being there for Kilburn to watch and learn from. “I get more out of watching someone paint,” she said, than being told how to do something. “I can’t remember words – I’m terrible that way!” 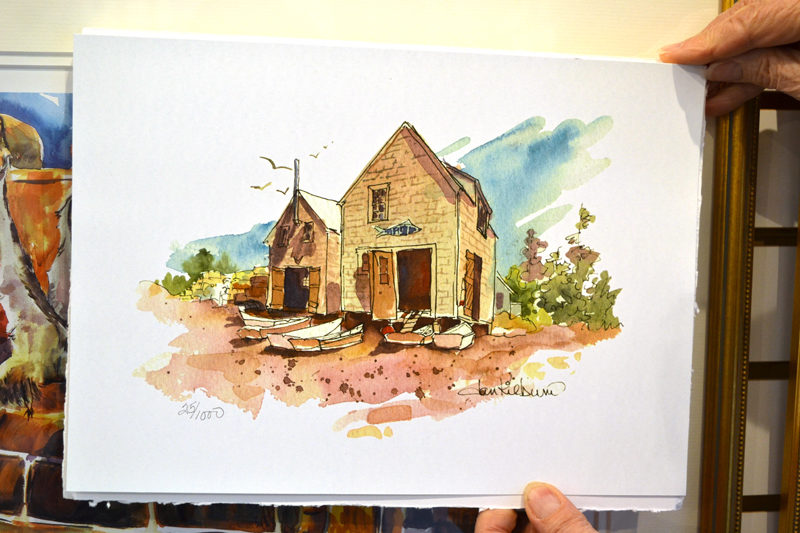 Jan Kilburn holds a print of “Fish Houses, Monhegan.” Kilburn likes to use pen and ink to outline buildings in her smaller pieces, such as this one. (Christine LaPado-Breglia photo)

Kilburn’s modesty is also apparent in the amount of money she charges for her three-hour classes: a mere $20. “I like keeping it that way,” she said of the affordable price. “That way, most people can come.”

As for visiting Kilburn’s gallery to view her work, it is “open all the time, by chance or by appointment,” she said. Look for the “open” flag or give her a call – “or knock on the door and I’ll open up.”

Maybe he’ll come back soon: My hubby, and my friend and her cousin, were part of the nearly sold-out audience at the showing of Wiscasset filmmaker Sumner McKane’s “The Northeast by Eastern” at Lincoln Theater in Damariscotta on Saturday, Jan. 28. 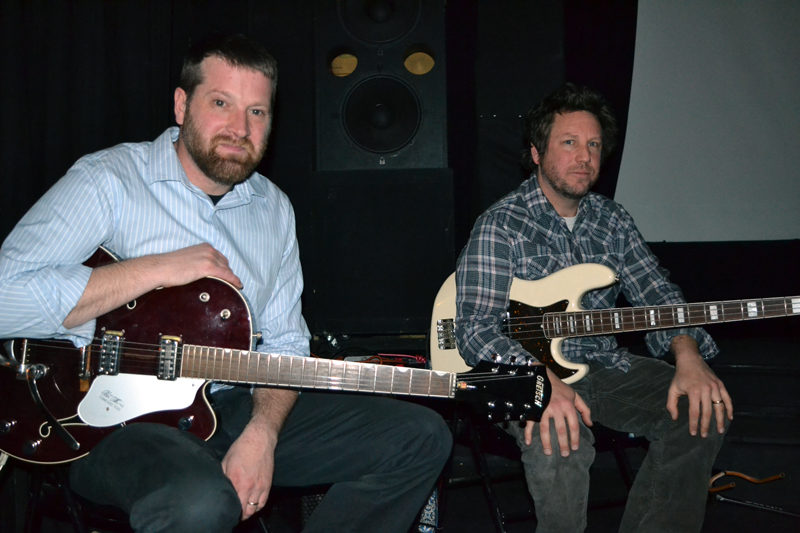 Sumner McKane (left) and Josh Robbins take a break after performing the live music accompanying McKane’s film “The Northeast by Eastern” at the Lincoln Theater in Damariscotta on Saturday, Jan. 28. (Christine LaPado-Breglia photo)

The historical documentary about early 20th-century New England through the lens of postcards was nothing short of enthralling and was made even more captivating by the live soundtrack played by McKane, who is also a guitarist and composer, and Whitefield bassist Josh Robbins.

As one man said during the Q&A session after the movie, “Don’t wait another 20 years before coming back to Lincoln Theater!” (McKane’s Jan. 28 appearance at the theater did indeed mark two decades since he had last performed at that venue.) McKane is currently at work on a new film called “Speedway Maine.” I vote that he screens it at Lincoln Theater.

Hoping for the best …