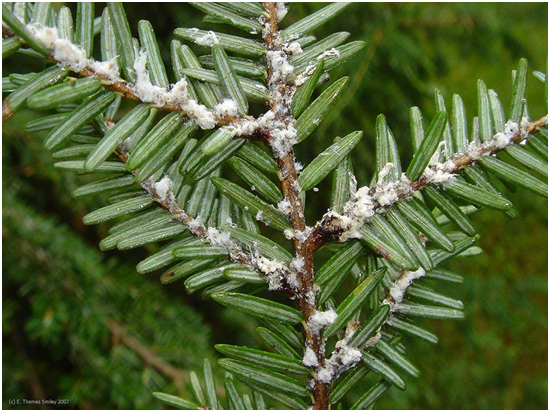 To check for hemlock woolly adelgid, look for white woolly masses at the base of needles on the underside of hemlock branches. (Photo courtesy Midcoast Conservancy)

When I think of my favorite forests, I think of hemlock stands. Of the dense canopy of delicate oval needles suspended by swooping boughs. Of the way the light dances and reflects off the foliage, casting intricate patterns below. Of the rich scent of the forest floor, barren except for a thick mat of needles and moss.

These hemlock stands are drastically different from other forest types both in appearance and function. They act as a foundation species: one that creates unique habitats upon which other species depend. Often found along streams and rivers, their dense canopy provides vital shade that keeps the water cool and able to carry more dissolved oxygen to support aquatic life. Interestingly, they even suck up less groundwater to do photosynthesis than other tree species! Not only do the rivers stay cool, their water levels stay higher. But these important trees are disappearing.

In the southern part of the Eastern Hemlock’s range (think Virginia, Pennsylvania, Connecticut, etc.), entire stands have been decimated by the invasive insect hemlock woolly adelgid. This tiny sap-sucking beetle attaches at the base of needles and siphons off nutrients. Eventually the needles die and fall off, starving the tree over a period of roughly four to 15 years. Cold winters have confined it to coastal Maine as far north as Camden, but it is steadily creeping northward and inland as our winters warm.

Hope takes the form of another very tiny, very hungry beetle. Sasajiscymnus tsugae is a predatory ladybird beetle that feeds on hemlock woolly adelgid in the beetle’s native Japan. It has been widely released in mid-Atlantic states and in southern New England to combat hemlock woolly adelgid since the early 1990s.

The Maine Forest Service has been releasing Sasajiscymnus tsugae since 2004 and has released over 100,000 beetles in Southern Maine. The research points to positive results: these hungry beetles make an impact! For this reason, Midcoast Conservancy released 500 Sasajiscymnus tsugae beetles at Marsh River Preserve in Newcastle this spring to give the majestic hemlocks a fighting chance. The next time you walk there amidst the swaying boughs and ocean breezes, breathe easy and know there is hope yet for our hemlocks!

If you have any questions or are interested in purchasing biocontrol beetles for your trees, reach out to isobel@midcoastconservancy.org.