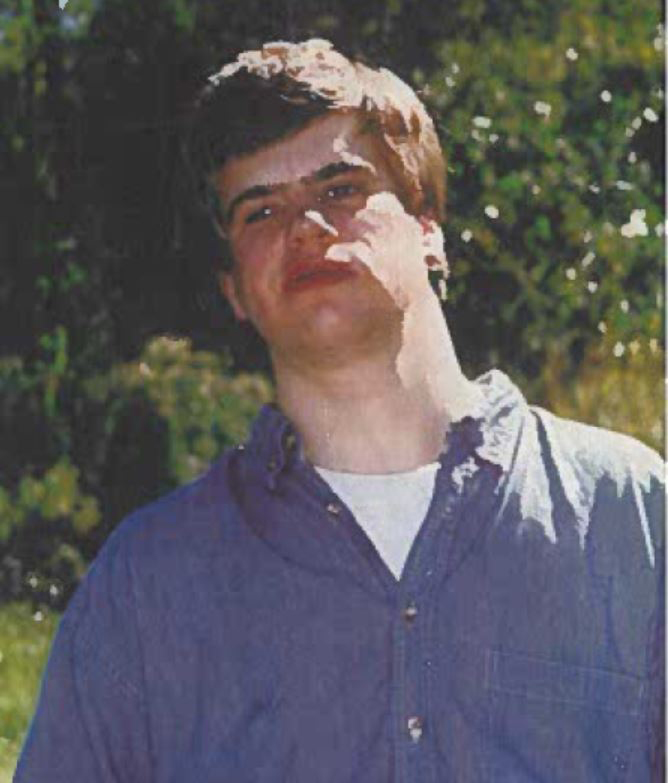 Brandon at his high school graduation.

This story, as told to one mother by another, is a hard one to write. Who does not love a feel-good story, one that makes you stop and smile or become teary-eyed with utter happiness? Then there are the hard-to-hear stories, the ones that reach in and crush your soul, the ones that keep you up at night, the ones that need to be written and very much need to be read. The ones that teach us a lesson and we never forget.

Brandon’s story is one of struggle, love, fear, and disappointment in a system that has failed this family again and again. If swift action is not taken by state leadership to adequately fund his services, it could ultimately fail again.

A young mother of 18 reaching out to what feels like a void of vast nothingness, where there should be hope, consideration, and respect. Imagine everything you know being tested, your strength of heart, faith in medical professionals and educators, those sworn to an oath of healing.

Who of us at age 18 knows of such things? Isn’t this a time for college, young love, trips to wherever the heart takes us, to be defiant of anything with the word “should,” to answer that call, to throw our caution to the wind and let the chips fall where they may? Sure, for some, but I invite you to enter Doreen and Tony Jones’ world.

Feb. 23, 1978, 18-year-old Doreen and her husband Tony welcomed their baby boy Brandon into the world. He was beyond beautiful, a tiny bundle breathing his first breath on Vinalhaven. He was born at 8 pounds after a difficult delivery.

Doreen was young and scared but ready to be home and eager to start her life with her son. He was a happy baby and only fussed during bath time, which was not a favorite.

At two months old, during a routine medical procedure, he turned blue. The surgeon suspected something was seriously wrong, and a diagnosis of transposition of the great vessel was eventually made. The cardiologist wanted to wait to perform the surgery needed until Brandon was older and stronger. He was sent home with medication to keep his heart stable.

Brandon became quite ill on his first day home, waking with a bad cough, sleeping, and was unresponsive. Tony performed CPR until a LifeFlight helicopter landed on Main Street on the island to take him and Brandon to the hospital.

Doreen did not know then that their world was about to change. The road ahead would lead her and Tony on a journey that would cause them to question everything they knew. They had each other and their absolute devotion to their new baby, but things would happen fast that would test them to their core. As Doreen describes it, this is the story with an unhappy ending of many more things to happen to “the strongest boy ever.”

Once off the island, Brandon went to Boston Children’s Hospital. The surgery lasted all day into the night, switching surgeons due to the length and intensity. After the surgery, Brandon seemed to be improving and then suffered a stroke, cardiac arrest, and a seizure. Doreen had no access to a car, and with Tony needing to work to care for his family, things were increasingly becoming dire.

After two months in the hospital, he started to gain weight and go home with prescriptions and round-the-clock care. Doreen and Tony, together, with no outside help, managed to not only keep up with all his treatments but keep their wits about them.

Two years later, Doreen found herself pregnant again. After a traumatic home birth, their second son Michael, at 6 pounds, was quickly diagnosed with brain damage after a high fever and seizures. They lived on the island and found limited services for their sons.

Out of desperation, Doreen and Tony left for Tucson, Ariz. They were hopeful they would be able to get the help they needed finally. After three months, no available jobs, and a long waiting list for services for Brandon and Michael, they returned home to Vinalhaven.

As Brandon and Michael grew older, small, rural schools would fail to meet their educational needs. Their services and education ultimately came under what is now the Maine Office of Aging and Disability Service. Their younger years required multiple moves to various group homes and therapeutic foster homes. Doreen and Tony found that medications were prevalent, too prevalent, and unfortunately became familiar with “chemical restraint.” 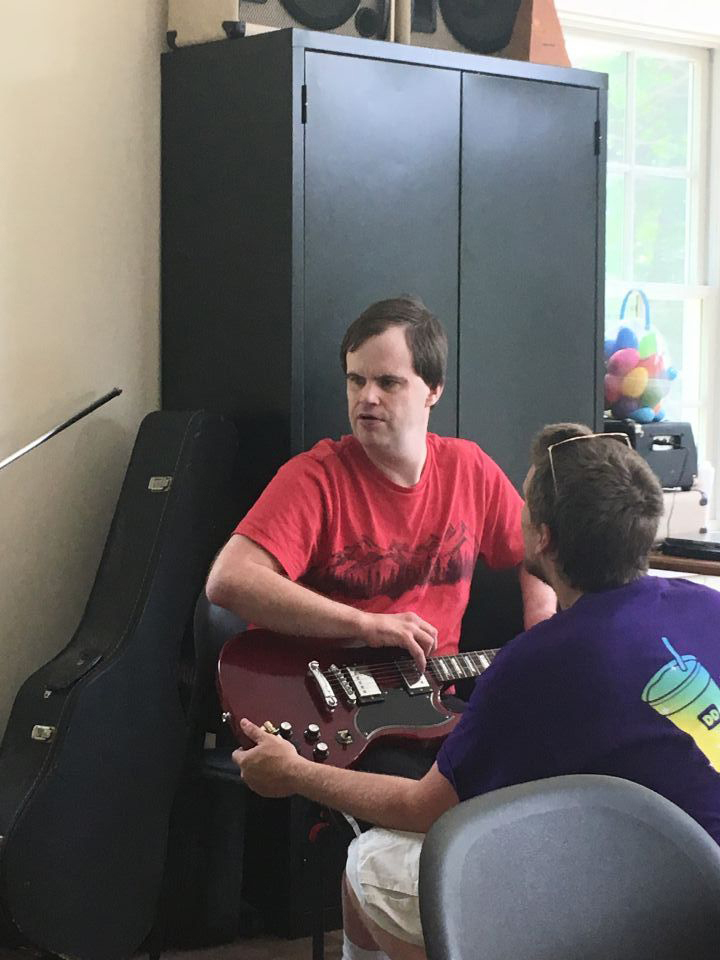 Brandon participates in a music class with a Mobius staff member.

Never settled and supported in one place for too long, Brandon lived in East Belfast, Brunswick, West Bath, and Harpswell, all before 9 years old. Michael was placed in another care facility. They were so burnt out by this time, and help seemed nowhere in sight. Every step was fraught with indifference, disregard for their plight, with seemingly no regard for a positive outcome for Brandon.

The excruciating process that Doreen and Tony experienced with Brandon would soon be made worse by Michael’s death while being cared for by a residential service provider.

After Brandon had spent 15 years at a residential placement, Doreen and Tony became concerned that medication was being used, once again as a restraint to provide behavioral management. They engaged a lawyer advocate to act on Brandon’s behalf, and he was removed from the placement.

Since 2011, Brandon has received residential services from Mobius Inc. He is cared for, supported, and embraced for exactly who he is, the ups and the downs. He receives 168 hours of direct care staffing per week, and his team works regular overtime as secure staffing has never become a reality. Every time individuals and families change agencies, social workers, administrators, educators, they find that skills are lost, expectations are different, and the lack of direct care staff is pervasive. Therein lies the problem. Families become so agonizingly exhausted, having to retrain, once again, the people who are supposed to be supporting them.

Finding that balance between compassion and bureaucratic necessity is at the heart of the challenge families and service providers struggle with daily. There is often a disconnect between funding and services to people. It is a critical flaw that affects not only people with disabilities but their families.

Why is adequate funding not provided for families who support their children in need? What price do our representatives put on life? Our society assumes a moral obligation to help those with the greatest needs adequately. The reality is that this support is costly. Our elected officials at both the federal and state levels must make decisions about how to balance the needs of Brandon and others with intellectual and physical challenges with the needs of the broader of the community.

The one constant throughout all of this is Brandon. His 1,000-watt smile, his love for hot dogs, and a great cup of coffee. His relationship with Dennis and Mike, his Mobius staff of over 10 years, their adventures together. Sometimes they go for drives, exploring back roads, visits with his parents, fishing, and everyday things that we take for granted. Dennis, Mike, and Brandon seem to be in sync, aware of Brandon’s feelings and needs. They are in tune with each other, like old friends who like each other and share a common understanding of what is valuable in life.

“Dennis and Mike have done so many things with Brandon, and I feel so safe for him when they are together,” Doreen said. “Everything is working well, having Dennis and Mike with him for almost eleven years. They love Brandon like their own. We are very lucky to have them both, very thankful.”

But how much longer can the support system run on luck? Due to chronic underfunding by MaineCare, services like those Brandon receives are collapsing across Maine. In 2015, Mobius provided 24/7 residential services at 12 locations across Lincoln County.

As of this writing, six sites offer this level of care and support to adults with intellectual disabilities or autism — a 50% reduction in six years. Mobius is not unique; residential options across Maine are closing due to inadequate funding to afford the high-quality, professional workforce that Brandon, and thousands of other Maine citizens, deserve.

(“The Mobius Strip” represents our inner gifts and our outer selves working seamlessly together, creating a whole being. Mobius Inc. is based at 319 Main St. in Damariscotta. For more information, go to mobiusinc.org.)