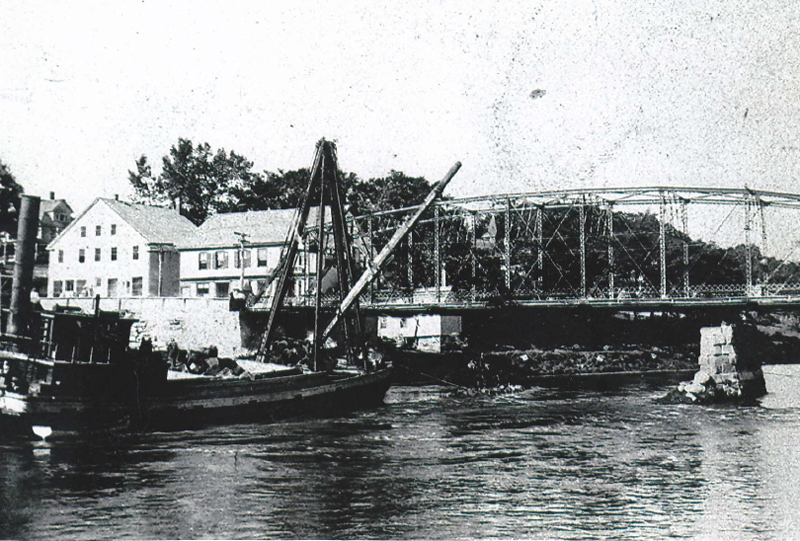 The area near the Damariscotta-Newcastle bridge as Thomas Gay remembered it. The new steel bridge had been built. The two buildings across from Gay’s store, bought by John Sproul, show clearly to the left of the bridge. These are are two of the few old buildings still surviving in the area.

Recently, the Newcastle Historical Society museum was given a notebook of articles and stories written by Thomas Gay (1902-1984). Gay lived his entire life in Newcastle and ran a grocery store near the bridge. In 1926, he married Iome Irvine (1902–1990) An article, dated 1979, tells about the area, its shops, stores, and people, as Gay remembered them. I have not changed the wording nor the punctuation in any way.

“I have resolved to record a few of the stories and experiences of my lifetime in order that the ways of people in Newcastle and Damariscotta during this period may be reviewed by future generations. May I state that these recollections are from my own doings and the facts as I record them are as I saw or understood them. Much as I dislike, I feel I shall have to use the pronoun ‘I’ constantly in order to better make these little anecdotes readable and interesting. Probably others will leave similar records and do much better, but at least I shall have the satisfaction of presenting some of the events and experiences of the early 1900s. I regret that during the years past I did not keep a diary or at least make ‘on the spot’ notes.

“I was born 1902. The main street of Newcastle presented a somewhat different picture at that time and during my earliest years. The bridge between the two towns was of wooden construction, and was suspended in the middle by two rock piers. This burned in 1905 and was replaced by a steel structure without piers. I recall vaguely the fire and my father leaving the apartment to help in the emergency. He cut his foot with an axe while helping chop a section of the bridge down in order to prevent the spread of the flames. My mother applied some home remedy and I don’t think he was bothered too much by the accident. The new bridge was soon started and in use before the next winter. While this was under construction a small dory was used as a ferry to take people, mail, and other commodities from one town to the other. Sawyer Vinal was one of the operators of this craft.

“The two buildings presently owned by John A. Sproul were in the same location as now. The one next to the bridge contained the post office as it does today and the shop next to the water was occupied by T. J. Merrill of Damariscotta, who was a tin smith. This shop was later used by Fred Harrington as a furniture store and headquarters for his business as an undertaker. Fred moved his business later to the brick block at Genthner’s corner and I believe that John Sproul was the next occupant of this store. He expanded his business from year to year, resulting in the purchase and occupancy of both of these buildings. A rent over the post office was occupied by A. J. ‘Ally’ Wood, who for many years operated a grocery store at the railroad station. Mr. Wood’s family consisted of his wife and three sons, Ton, Frank, and Maurice.

“Fred March operated a marble and granite works in the next building, using the store farthest away from the bridge. His stone cutter was John J. Murphy, who lived on the Mills Road in the small house across from the schoolhouse. After Fred went out of business in the early 1900s this section of the building was largely unoccupied until John Sproul took it over.

“The other store in this building was used as a grocery and operated by Gould Bailey, at that time an old man. Mr. Bailey went out of business and passed away. After the fire my grandfather and father established their business here (1908) and remained until the present store was built in 1910, the new building (store) opening in October of that year.

“After my grandfather and father moved out the store was made over and housed the first movie hall of the village, being known as ‘Kneeland’s Scenic Theater.’ I don’t believe the place sat more than 75 people if crowded. Most shows consisted of 4 reels, each of a different subject. There was always a western or cowboy reel, a comedy, and maybe a drama or tragedy. Special occasions featured a longer show and some vaudeville acts. A pianist was generally present and played along with the pictures, changing the theme of the music to suit the film. I remember on one occasion the film depicted United States troops (who) charged, routed the natives, and advanced the flag; the entire audience arose in patriotic fervor and cheered themselves hoarse. The pianist played ‘The Stars and Stripes Forever.’

“I went to the shows many times on Saturday afternoon and it cost 5 cents to get in. I think the price of the evening admission was 10 cents.

“Eventually Mr. Kneeland sold out his business to a man by the name of Kay. While this man made some improvements in seating and presenting the shows he evidently was not successful and closed the place after a short time. I believe that at this period shows were introduced in Damariscotta, being presented once a week for a while and then more often. Maybe the competition was too much for the Newcastle show.

“Sometime after this, F. T. Robertson opened a grocery and feed store and carried on a successful business for quite a few years. George T. Watson of Newcastle was the next occupant, selling groceries and grain. He eventually went out of business and Fred Lailer reopened the store, offering groceries and meat to the public. I think his health failed and he was forced to retire sometime in the early 1930s.

“For the next few years this outlet was used as a summer store known as ‘The Trading Post’ and was owned by a man in Boothbay Harbor, but the actual store was done by others. Among these people were Rodney Wyman and his wife, Alice. At this time Rodney was principal of Belgrade High School and used this summer job to earn an extra additional income. They lived in the lower Robinson cottage across the street with their small son ‘Bobby.’ Iome and I visited the cottage frequently and enjoyed many pleasant times. Rodney and Alice were good swimmers and we all enjoyed frequent dips off the end of the wharf and in toward the little beach near the end of the bridge.

“I believe the last summer they ran this store was 1941 and of course the war coming on in the late fall of that same year changed many things and the lives of many people. We have only seen the Wymans once or twice since.

“This store was once again closed until such a time as John Sproul bought the building and used the space for his furniture business. From time to time the rent of the second and third floors were occupied. John improved these somewhat and for some years they were in full use. At this time (1962) only one of the two are rented and John uses the other rooms for display purposes.

“In the very early 1900s there was a small building across the street from these two. This sat on posts on the shore and very near the water at high tide. This housed a laundry and was run by Percy Tomlison and his wife. They lived at the upper end of Glidden St. The laundry was called the ‘Eureka.’”

Comment: The Sproul buildings are two of the few old buildings left near the bridge in the village. They have had a long history and I am pleased to be able to share it, and the stories of the community around them. It is a firsthand look as seen by someone who lived there and knew the people and places.