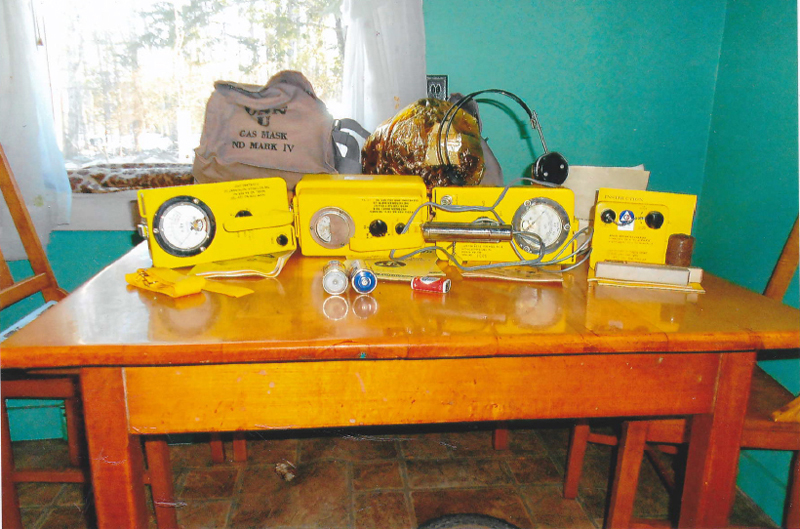 Radiological equipment used in the Cold War of the 1950s and 1960s. (Photo courtesy Arlene Cole)

Recently, there was an article in the Portland Press Herald on the Cold War of the 1950s. It was triggered by the fairly recent false alarm of a nuclear attack on Hawaii. This caught them by surprise, not knowing what to do. Sixty years ago we would have known what to do.

Back in the mid-’50s, the Korean War had ended, so we were at peace. But we were uneasy about our relationship with Russia. We were afraid of a nuclear attack by them. Those worried years were known as the Cold War.

Newcastle’s first official involvement with it is listed in the 1957-1958 town report. In Article 20 of the town warrant: “to see what sum, if any, the town will vote to raise and appropriate for Civil Defense and Public Safety.”

The town report for 1958-1959 reported that Anthony Petrillo had been appointed director of civil defense. He had spent $84.49 in his duties for the year in going to classes and for office expenses.

For the year 1959-1960, Col. Philip Donnell had taken over as director. He had spent $94.95 of the $100 appropriated. He reported that he had 40 volunteers filling the positions suggested in his instructions and needed some 30 more. He had held training classes. The national and state plans called for Newcastle to become a reception area for those evacuated from target areas such as Portland and Brunswick and/or survivors from areas already destroyed.

The first duty of the 40 appointed wardens would be to inventory each of the 380 homes and other structures to find their capabilities to house refugees. Maps had been made up to locate dwellings, service stations, churches, Grange halls, etc.

As the group was now a part of the national organization, surplus material and equipment were available. Smaller items such as fire hose, nozzles, and pole climbers could be had at a low cost. Larger equipment such as bulldozers and fire trucks could be bought at matching funds. Donnell recommended the town take advantage of these methods of low-cost procurement and include in its budget $500. It would not go far toward heavy equipment but would be a start.

Classes would be given at the University of Maine and in Augusta. He planned to attend a school of instructions at the National Civil Defense School on Long Island in March.

Donnell’s report for 1960-1961 was that the civil defense program was expanding slowly, but there seemed to be a lack of interest on the part of the general public. During the months of March, April, and May, there had been weekly schools at the Lincoln County headquarters for wardens, and an “Alert 1960” carried out nationwide.

Much larger sums than Newcastle could afford would be needed to obtain some of the suggested equipment, but some items had been purchased: a 3-kilowatt, 110-volt gasoline-engine-driven electric generator, a complete electric wire distribution system with sockets and bulbs, tents, splints, first aid cases, water carrying bags, carrying and cover blankets, and a Geiger counter with all its attendant equipment.

Donnell came to see my husband, George, to see if he would be in charge of the Geiger counter group. George had received his discharge from the Army, after the Korean War. While in the service, he had gone to guided missile school and then taught both Army members and civilians in guided missile information. This had been the time of the beginning of Cape Canaveral in Florida and White Sands in New Mexico.

George explained he had taught the action of the missile and how to get it to the desired spot. He had had nothing to do with the nuclear warhead. But Donnell said, being in that atmosphere, he probably knew more about it than anyone else in Newcastle. George’s duties were to go to different parts of town every week or 10 days to check on the radiation there and report any problems. He would be checking for radioactive fallout.

In 1961-1962, Donnell reported the subject of shelters was controversial. Everyone should have a place to go that was safe. One thing that was suggested was that each family who preferred it or who could afford it should build a nuclear shelter where they could go quickly in case of an attack.

It was estimated it would cost Newcastle $20,000 to build a shelter for the town, and that would be more than the town could afford. A shelter should be built with concrete, cinderblock, or brick, and have no window and only one door. The cellar would make a good location as there were already concrete walls and most families had food and water available in the cellar.

How many people in Newcastle built shelters, I do not know. Several of our friends said they did and others said that they planned to. We did not. We felt Newcastle would not be the center of any attack and that our four-walled concrete cellar with food and water in it would have to serve. It would be much more likely that we would be called on to take people into our home because of nuclear attacks in the cities.

In cities, tens of thousands of buildings all over the country were built as shelters for its citizens. They were marked by a metal sign featuring the symbol of radiation – three joined triangles inside a circle. The Portland Press Herald article noted that now, in 2018, we have these shelters that have not been taken care of and are now unwanted relics.

The organization had grown to 70 members — 15 women and 55 men. Several had attended schools and instruction periods, including Donnell. Literature was also available on many subjects.

It was the selectmen who made the report at the end of January 1963. They were sad to report that Donnell had recently passed away. He had been director of civil defense since 1959 and been very active in the project. He would be sorely missed. He was a veteran of World War I. He was 73 years old.

The town selectmen appointed Winslow Billings as the new director. Billings was the assistant fire chief of the Newcastle Fire Co. He also was a working man and did not have as much time to spend as Donnell had. He reported in 1973 that they had another generator. This one was AC, of 3 kilowatts. They now had both AC and DC generators. They also had a fire tanker. This needed more work done on it. It was understood that Damariscotta, Nobleboro, and Newcastle would all three have use of it, but it was to be housed at Newcastle.

It was easy to see that the civil defense and fire company groups had much in common, and it was not surprising they moved closer together as Billings became the fire chief in Newcastle in 1971. Also, the Cold War was warming up.

In the 1974 town report, under “Civil Defense,” was this notice: “This year the name of Civil Defense has been changed to Civil Preparedness, thus putting more emphasis on natural disasters, fires, etc.” There were no more reports. George offered to give the fire company the Geiger counter kit but they said, “Keep it — we don’t know anything about it.” He stored it upstairs in the garage.

When I became curator at the Newcastle Historical Society museum, George and I made a tour of the building. The first two floors were much as we expected. The third floor had been the home of Harry Vinal many years before, and some of his furnishings were there still. There was also equipment that appeared to have been left from civil defense days. There were canvas pieces, stretchers, bandages, bags, blankets, and items that we didn’t know just what they were. We piled them up neatly, did some minor repairs, and left them. I use the third floor for items I don’t think we will ever use but should not be thrown away.

After reading the article in the Portland Press Herald, it occurred to me that the Geiger counter was still in my garage. I pulled it out from behind everything. It, with all the equipment, was in the original box. Stamped on the side of the box was “Radiological Defense Monitoring Kit.” The date on the label is Oct. 4, 1962. There are six parts in the box: two gas masks, three radiological survey meters, and one charger, There are also instruction books and a few small things like batteries and straps.