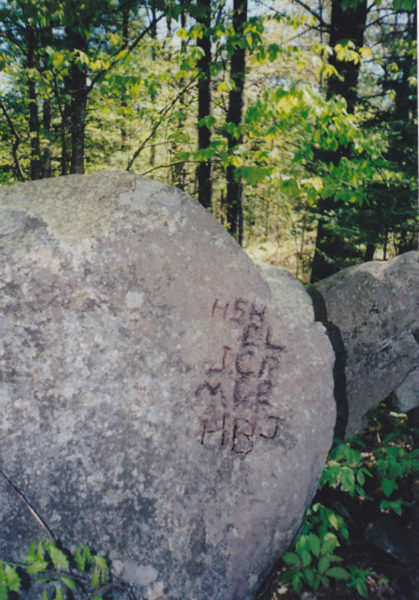 To get an effective photo, we took a black marking pen and carefully traced out the initials on this split rock as best we could. (Arlene Cole photo)

There is only a mile on the old county road (Academy Hill Road) between the Catholic Church and me, but there is a lot of history there. In early days, it was the only road between Newcastle Village and the Mills. Then it declined and very nearly was discontinued. Now it has come back into being one of the most heavily populated areas in town.

Saint Patrick Catholic Church was consecrated in 1808. Bishop John Carroll, of Boston, came to Newcastle to make the dedication. The land for the church had been given by James Kavanagh and Matthew Cottrill, who owned much land in the Damariscotta Mills area.  The brick church sits on the hill overlooking Kavanagh’s house and Damariscotta Lake.

The road south from the Mills passed in front of the church. Around the first bend, the road forked. The road to the right went to Sheepscot and North Newcastle. The other road went along the ridge to Newcastle Village and across the Damariscotta River, after 1797, to Cottrill’s house. Both roads are referred to on plans and maps as old county roads.

In early Newcastle, there were no roads as we know them today. Most travel was by boat. On land, rude tracks were hacked out through the woods. Indian trails were followed and the trees spotted to direct the traveler. These were slowly improved with foot paths, bridle paths, post roads, and cart roads, and became, in many cases, the county roads.

Fannie Chase, in her “Wiscasset in Pownalborough,” writes: “Settlers were asked to make paths from house to house ‘fit for foot and creature.’” The Mills being a natural early crossing of the Damariscotta River meant all travel in the area went to and from it. The Mills with its falls became a thriving village where Kavanagh and Cottrill prospered.

After working together for many years, Kavanagh and Cottrill decided to split their partnership. About 1813, they hired surveyor John Foye to survey the land they owned at the Mills and all their land on both sides of the old county road to Newcastle Village. Each would get alternate lots. Foye’s plan, dated Jan. 11, 1814, shows six lots, three going to Kavanagh and three going to Cottrill. It is interesting to note some of the bounds. Each lot begins at Salt Bay. Lot 3, which went to Cottrill, started at “some thorn bushes.” Lot 4 went to Kavanagh and started at “a tree stump marked on all four sides.”

There was, apparently, some confusion, for in 1831 Rodney Jones, surveyor, was hired by Cottrill’s heirs to survey the land they owned in that area. The old county road was now called a highway and was mapped as three rods wide. The thorn bush is still mentioned as a boundary “on the margin of Salt Bay near a pine tree.”  Jones does not mention the tree stump.

According to the 1816 Newcastle map, when the land was surveyed by Josiah Jones, Robert Redlon owned the land just south of the Kavanagh-Cottrill land. Ebenezer Farley owned 66 acres south of that. Farley did not live there. His home was at the corner of Hopkins Hill Road and what is now Route 1. This 66 acres may have been used as his summer pasture for young stock.

Benjamin Jones was the next landowner. His land, more than 100 acres, was all on the west side of the old county road. According to the Rev. David Quimby Cushman in his “History of Ancient Sheepscot and Newcastle,” Jones had sold his land on the east side of the road to Joseph Glidden so Glidden could have an outlet from Glidden Point on to what was then the main road.

In 1950, my husband George and I bought land and built our house on land that had been owned by Benjamin Jones. By 1950, the road between our land and the Catholic Church had been greatly neglected. Back in 1850, the Fish Stream Bridge had been built at the Mills. Some years later the ends of the road along Salt Bay came together to form what is known as Mills Road. This had been a crushing blow to the road over the Academy Hill Road ridge, for most traffic began to use Mills Road.

The county road section that led to Sheepscot and North Newcastle was discontinued. The north end of the old county road to Newcastle village had been maintained and tarred past the Catholic Church drive way for church members to use. On the south end, it was tarred to the home of Superintendent and Mrs. Blynne Allen on Academy Hill Road, just south of our new land. Allen’s land had been Joseph Glidden property. The road between our new home and the church was narrow and had become a quagmire in the spring and was often not even plowed in the winter. We settled in, and I have been able to watch the changes that have brought this mile of road back to life

In 1964, mostly as an investment, we bought part of the old Kavanagh-Cottrill property, up the road from our house. It consisted of parts of two of the lots on the old Jones plan. They were formerly owned by Winnefred Kavanagh and John and Elizabeth Cottrill Madigan. No houses had been built in the area, but it was used by many of the farmers as a summer pasture.

When the railroad went through in 1871, this use of pasturing was carefully noted in the transaction. I quote from the County Commissioner’s records, May term, 1870: “It was also ordered, that the above named Rail Road Company shall make and maintain for the use of the owner or occupant of the aforesaid piece of land described in said petition as ‘beginning at the land of Elizabeth (Cottrill) Madigan in Newcastle and extending Easterly to the land of Winnefred Kavanagh, at some suitable place on said land a good and sufficient farm pass and crossing with suitable cattle guards on each side of the same and the said crossing to be at grade and to be built by the time the Rail Road track is completed.” The land we bought with its cattle crossing began on the west side of Mills Road and went to Academy Hill Road.

In looking at our new deed, we noticed that one section was referred to as the “split rock” lot. This whetted our interest. It seems that there are split rocks and split-rock roads in almost every town. Upper Academy Hill Road has one of its own. In our search, we found the “split rock.”

It appears that at some time when men were improving the road, a large rock was unearthed. It was split in two or three pieces and moved far enough back from the road so it would not interfere with travel. On the flat, broken surface of the largest section of the rock were carved many sets of initials. It must have taken some time and needed the right tool. Maybe workers on the road spent each noon break working their initials into the stone. Maybe it was someone else entirely who carved the initials there.

The letters were carved into the granite. Some letters are deeper than others. Getting the light just right, we could read most of them and we could feel the indentations when we ran our fingers over them. But the camera would not pick them up. To get a picture, we took a black marking pen and carefully traced out the letters as best we could. Our first reference we could find to the split rock lot was in a deed dated 1869. It is reasonable to suppose the rock and letters have been there since sometime before that date.

I have lived here for more than 65 years. There has been a marked change in the pattern of travel. Most people have their own private car. At some time along the way, people began to notice the empty pasture land so close to the villages of Newcastle and Damariscotta Mills. At one time there was talk of building the new grade school on one of the lots, but the plan had been voted down.

With interested buyers, the land became desirable. Owners were willing to sell. Today, there are three housing projects and many individual houses on this one mile of roadway. The road has been widened and straightened. It was tarred in 1959. There is a white stripe down the center of the road. There is even a sidewalk up to my house. Traffic is constant.

St. Patrick’s Catholic Church in Newcastle is the oldest Catholic Church still holding regular services in New England.  But it, too, has changed with time. In 2003, a large addition was built at the rear of the little brick church to make room for its growing population.

As I was writing this article, I realized I had not visited the split rock for some time, so I decided to take a walk up the road to see if it was as I had remembered it. The ink we put on it to get our picture has long been washed away. Moss and lichen have grown over some of the letters, but the rock and initials are there just as they have been for 150 years. I know of no way to find out whose initials are carved in this split rock, but it is a little piece of history of the old county road between the Catholic Church and me.