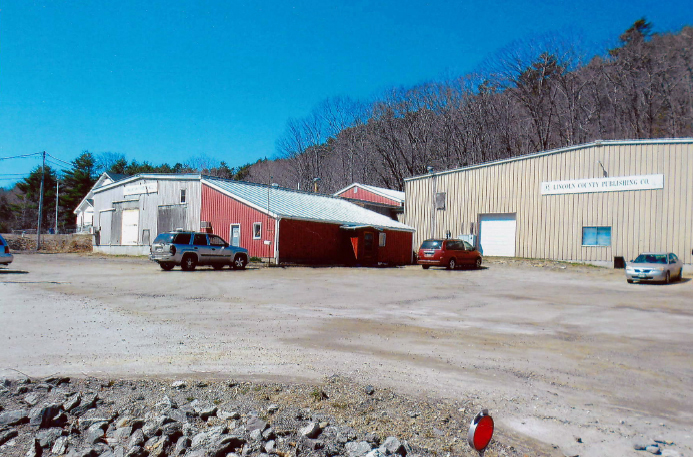 I went to the recent open house at The Lincoln County News. It was well-attended and I enjoyed our trip through the steps of printing our paper. I have been writing historical articles since 1998 and it occurred to me that I had never written on what was one of our largest industries in the town. I feel it is time I changed that.

The Lincoln County News, faithfully, each week sends out a newspaper telling about all the news in Lincoln County. The news is the noticeable part of the Lincoln County Publishing Co., a family owned business that has been serving the County for over 140 years. In the “papah,” you will be able to read about happenings, goings-on, town meetings, local sports, events, obituaries, weddings, and other features. They have a large group of correspondents who send in community news and articles of our historical past. If you did something of note in Lincoln County, you can expect to see your name in print.

I have been involved with them for many years. I remember in December 1959, I walked, tentatively, into the office of publisher Dorothy Erskine Roberts to let her know that I had better weather records than the ones she was using. Earlier, she had received records for each edition from NOAA weather observer Nancy Rawlins, who lived on Bunker Hill Road. Her information was no longer available and the present material Roberts was getting was sketchy. She took me on at once. I was to call her office early on Wednesday morning with my report for the week. I would be one of the last news items to call in for the weekly paper. By then, the paper was already starting its weekly printing process. That was nearly 59 years ago.

Dorothy Erskine Roberts was a daughter of Samuel H. and Abbie Hodgman Erskine. The Erskine family had a long history in Lincoln County. Christopher Erskine, of Abbington, Mass., settled in Alna in 1766, according to Christine Dodge’s records. No name is given for his first wife but as a second wife he married Ruth Cox Erskine, widow of William Erskine. He moved briefly to Whitefield and then moved in with his son, Christopher Erskine Jr., and his wife, Abbie Hodgman.

Their son, Samuel H. (probably it stands for Hodgman) Erskine, Dorothy’s father, was born in Whitefield Feb. 2, 1861. He graduated from Bowdoin College in 1891. According to information from the LCN, he was the principal of Limerick Academy and Lincoln Academy. For 15 years, he was principal at Rutland, Vt. He served as superintendent of schools in Massachusetts and then returned to Vermont in 1914 as superintendent of the Windsor Northwest District. While living in Rutland, he worked briefly on the Rutland Evening News. He retired and returned to the Damariscotta area.

In the newspaper business in Damariscotta, Leo Arnold Gray bought and merged the Damariscotta Herald and the Sheepscot Echo into the Lincoln County News in 1919. (This should not be confused with the Lincoln County News published in Waldoboro from about 1872-1912.) George W. Singer was his editor. Gray bought the brick building at Main and Water streets in Damariscotta. He repaired the building and moved equipment from both papers into the new location. Unfortunately, Gray died only a few months after the purchase. Singer continued as editor for Alice Gray until she sold the paper to Samuel H. Erskine. He put out his first edition on Dec. 9, 1920.

Erskine’s wife, Amy Albee Erskine, worked with him from the beginning. About 1924, daughter Dorothy and her husband, Francis “Fred” Roberts, returned to the area. In the 1930s, Dorothy started working at the paper.

Disaster struck on July 19, 1943. Harold Castner writes of when the great fire of that date wiped out a large portion of the village around the newspaper office area. By nightfall, the Lincoln County News building was just a mass of charred memories. One of the great losses was copies of earlier papers. There was no way to replace them. Samuel Erskine was 82 years old. Dorothy Erskine Roberts had been taking over more and more of the responsibilities and assumed the position of editor and publisher.

Castner writes there were grave doubts of many individuals that the paper could survive this crushing blow. Mrs. Roberts rose to the occasion. Editors of other papers of the county came to her aid and the paper did not miss an issue. It was a slow process to rebuild. World War II was on and it was almost impossible to procure machinery, but she survived and brought the paper to a much greater size and greatly increased circulation. Samuel Erskine died in 1945.

The paper made its new home on Church Street at a building next door to Mrs. Roberts’ home. Her office was one of the rooms of her house. In 1966, her son, Samuel Roberts, took over the ownership from his mother but she continued as editor emeritus until her death in 1973.

Samuel, obviously named for his grandfather, graduated from Fryeburg Academy and joined the Navy in 1949. In 1966, he returned to Damariscotta with his family and took over from his mother. He was aided in his work by his wife, Abbie, who worked with him through the years. When Abbie retired in 1992, she was its managing editor. Sam is listed as publisher emeritus, but they enjoy much of the winter in a warmer home.

In 1967, they bought the Waldoboro Press and merged it with the News. The News had become a sizable publishing business. In this area, if one wanted wedding announcements, personal stationery, business forms, or town reports printed, that was the place to go. They would print your book for you. From Elm Street they were able to back trailer trucks up to a loading dock to save carrying the large rolls of paper and other supplies, but they were still bulging at the seams.

In 1978, Christopher Roberts, Samuel and Abbie’s son, a graduate of LA (1974) and UMO (1978), joined the family business. Christopher, obviously named for his great-grandfather, became the fourth generation to run the business. He gave the final necessary push to relocate. They purchased Hunt Brothers building that had been built for Grant’s Dairy, located at 116 Mills Road in Newcastle. They have still kept their mailing address as Damariscotta. They built on an office area and a two-story addition at the end of the original building. They have expanded even more through the years until they have a complex of almost 25,000 square feet. Christopher experimented with color. At first, he printed just two pages in color but if you watch, you will see another page added in color from time to time.

They were joined by Christopher’s wife, Paula Flagg Roberts, part time in 1981 and full time in 1993. Paula was a graduate of LA (1975) and Springfield College (1979). She is busy where needed. If you go to the office, you may see her sifting through other newspapers, looking for Lincoln County News items. Or you will see her at a local post office on paper day delivering bundles of papers to mail. But her real love is sports. Since she came to the News, the sports section has expanded from one little section to four pages of all the latest sports news, in color.

When I visit the office, it is nice to see the familiar faces of many who have worked there, even for 20 or 25 years. It is also nice to see all the newer faces of a young enthusiastic crew. J.W. Oliver, the editor, is only 34 years old.

The business is growing. In January, they wrote of staff changes, retirements, and promotions. With a staff of more than 30, something is going on all the time. Also, in January they advertised for a full-time reporter and photographer. This person would cover local government, breaking news, business news, community events, and courts. An applicant should be able to use modern electronic equipment and be willing to work nights and weekends. For the right person, it would be a perfect chance to join with a busy dedicated group. This is what they are. That they are a close working crew is also obvious on Wednesday mornings when they work as one, rolling the press and getting the paper out.

Recently, a new generation has come to work at the news. Christopher and Paula’s sons are making it their life work. John, (LA, 1999, and UMO, 2003) is married. He and Kristen have two little boys, Matthew, 7, and Thomas, 4. Allan (LA, 2002, and UMO, 2006) is married to Allison. They have a son, James, 4, and a daughter, Michaela, 3. I can already see the sixth generation coming to the plant and learning the ropes.