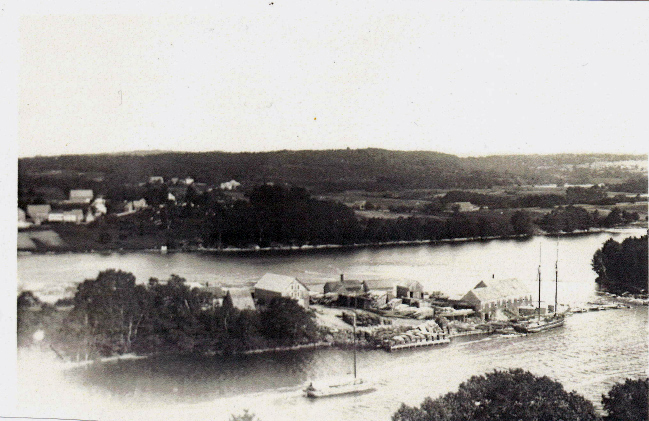 Mill with dam at Sheepscot. The mill burned in 1906.

The Sheepscot Falls Lumber & Grist Mill Co. was started by brothers Job and Israel Averill. Job Averill was one of the early residents of Sheepscot. He was followed to the area by his brother Israel and family from Ipswich, Mass. Job bought a 1,000-acre tract from the Kennebec Proprietors. It began below the falls and extended to the Alna Meeting House. He settled his children at several places up and down this tract. At the upper end of the long ridge west of the Sheepscot River, in what is now Alna, he built his first house.

The Rev. David Quimby Cushman writes in his “The History of Ancient Sheepscot and Newcastle” that it was a garrison house for the use of the inhabitants. There was conflict with Native Americans then. At one time, Job was taken by them to Canada, but he returned safely. The ridge became known as Job’s Mountain. Charlotte C. Donnell has written much about the Averills and the mill in her “Sheepscot, Three Hundred Years of Transition.”

Job obtained a license for a ferry across the river in 1764, taking over from earlier ferries. His ferry was located about where the bridge is today. He later built a second, which he and Israel started. A toll bridge replaced Job’s ferry in 1794 and he was the first person hired to collect the toll. The bridge became free in 1894.

The Sheepscot Falls was originally known as Batt Falls. The name seems to have come from Christopher Tapan’s grandfather, but it is not known where he fit into the picture. The tidal power cannot be compared to the vast water power at Damariscotta Mills, but substantial tidal power was developed from these falls starting back about 1760. 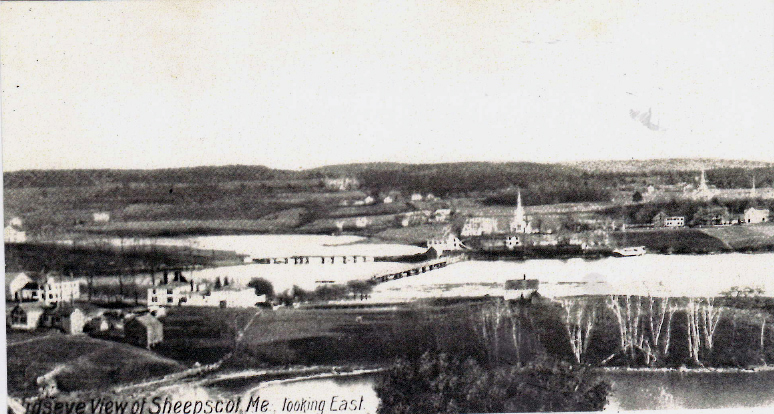 The fire left nothing but the captain’s house and a shed. This later picture shows the house and a few young trees near the water’s edge.

The Sheepscot River is a tidal river and the falls are about 20 miles above where the river enters the open ocean. At the falls, the river makes a sharp turn to the east, where a submerged rocky ridge creates a considerable fall of water on the outgoing tides and some drop on the up-tides. This is known as the reversing falls.

Substantial tidal power has been developed from these falls over the years. Job and Israel originally promoted the use of the falls for sawing lumber and, at least, some use as a grist mill. Their sons joined in the development of water power at the falls. Israel’s will, dated 1785, shows a sizable operation. The natural fall was supplemented by the construction of a dam of four log cribs filled with rocks, between which were heavy wooden gates. The central one was so constructed that the gates swung open with a rising tide to let in the maximum amount of water and allow for the passage of vessels up or down at flood tide. This provided a 14-foot head at the peak of each tide, according to local ratings.

The dam changed hands in 1785. Later it was owned by Dennis Weymouth and members of his family until 1860. Franklin Carney, Oakes Rundelett,  Trask, and Palmer were later owners. About 1904 the property was acquired by the Bath Box Co., but it was never again operated. It burned in 1906. The fire left nothing but the Captain’s House and a shed, beside the log piers in the river above the dam, which held the log booms and some of the millrace structure. In 1924 the dam was dynamited to facilitate access by boats to the upper river. The old mill stones have been reported by scuba divers to be lying in the river above the dam’s site.